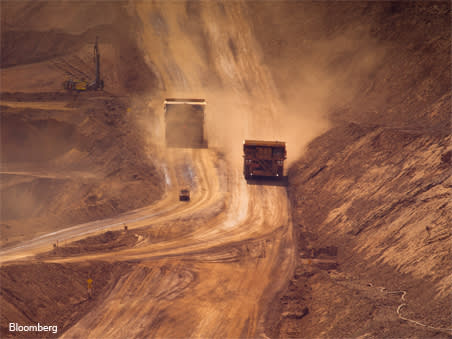 And it's got a stellar track record

A number of the major diversified resources companies have raised their dividends or paid special dividends in the past year and BlackRock World Mining is the latest to embrace this trend.

BlackRock World Mining recently announced an increase in the total dividend from 6p to 14p – an increase of 133 per cent – along with plans for a future increase via an accounting change. Analysts, including Winterflood Securities, Oriel Stockbrokers and Collins Stewart, expect these changes to increase the fund's attractiveness to a wider investment base and thereby narrow its traditionally wide discount.

Originally launched as Mercury World Mining in 1993, the fund is the largest of the specialist commodities funds in the investment trust universe with assets of over £1.5bn. It is managed by Evy Hambro, who is the co-head of the experienced natural resources team at BlackRock.

The fund has an excellent long-term performance record despite being hit hard in the downturn in late 2008. Over the past three years, the net asset value (NAV) of the fund is up around 150 per cent compared with 103 per cent for the fund's benchmark, the HSBC Mining index.

Despite a stellar track record which has seen the fund beat its open-ended cousin and broader equities, the discount has remained stubbornly wide – averaging at 15 per cent over the past 12 months. There are a number of reasons for this: unlike other BlackRock investment trusts, there is no discount control mechanism – the board has traditionally only used buy-backs on an opportunistic basis, preferring not to diminish the fund's liquidity. Also, while capital gains have accounted for 89 per cent of the total return, the fund has always charged 100 per cent of its fees and costs to income.

But this is about to change. Following pressure from City of London Investment Group, a 10 per cent shareholder, to narrow the discount via a substantial increase in the dividend, the board has put forward proposals to change the fund's dividend and accounting policy. The fund will charge 75 per cent of its costs to capital and 25 per cent to income – had this been implemented last year it would have potentially allowed the fund's yield to be increased to around 3 per cent based on its current share price.

Since the announcement was made, the discount has narrowed considerably and is already 9 per cent, the narrowest in the past two years.

While higher dividends will appeal to the growing number of income-hungry investors, there are investors less keen on income, instead preferring capital gains, given the UK's high rates of income tax. Investors also need to be aware that the resources sector is cyclical and, although many companies are currently cash rich, yield is likely to fluctuate. That said, BlackRock World Mining has revenue reserves that could be used to support its dividend. And, income aside, the fund remains a compelling investment opportunity – it offers broad exposure to a specialist sector and is backed by a record of outperformance and an experienced management team. Buy.

Price and performance figures as at 13 March 2012

Visit our funds and ETFs page for more fund profiles, interviews with fund managers and the latest fund news.