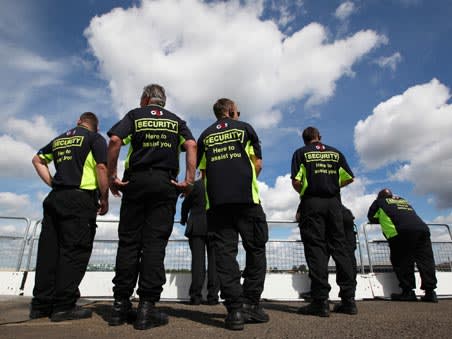 G4S's shares boast an attractive yield, an excellent dividend growth track record and are cheap compared with peers, which should spell a re-rating.

Shares in security company G4S (GFS) are looking cheap given the inflation-beating dividend growth record, global exposure, accelerating cash flow, and sector-leading organic growth rates. This is not without good reason as there are still lingering concerns that reputational damage from the Olympics fiasco could damage future contract success in the UK. But on closer inspection we now believe these concerns are overdone. For long-term investors G4S has an attractive 3.5 per cent dividend yield forecast over the next 12 months and a solid track record as well as valuation upside.

G4S's shares look cheap trading on a PE ratio of 12.5 times forecast 2013 adjusted EPS (see table), compared with a sub-sector average of 14.6 times and specific outsourcing peers such as Serco on 14.8 times. While last year's troubles provide reasons for the discount, the rating is looking increasingly at odds with the strong growth the company is generating. In the full-year results, organic revenue growth of 7 per cent was well ahead of sector peer Serco on 3.3 per cent. G4S is achieving this through exposure to higher-growth markets in areas such as the Middle East and Brazil. The developing markets division currently contributes 33 per cent of revenue and 37 per cent of profits, and chief executive Nick Buckles expects strong double-digit growth in the year ahead as he aims to generate 50 per cent of revenue from emerging markets by 2019.

That growth isn't coming at the expense of margins or cash generation, either. The group's operating profit margin was steady at 7.1 per cent for the full year with the company expected to achieve more than 7 per cent in the year ahead. Operating cash flow increased from £421m to £492m in 2012 and that represents a conversion rate of 95 per cent of profit before interest, tax and amortisation, a strong increase on the previous period's 84 per cent.

That strong cash generation has allowed G4S to deliver a five-year dividend compound annual growth rate of 6.9 per cent, which is coupled with an attractive forecast yield. Analysts expect that growth rate to accelerate with double-digit dividend growth in each of the next two years. Cash is not just being returned to shareholders, though; it will also be driving growth with Mr Buckles targeting around £200m in acquisitions a year. Thankfully, these look set to be of the bolt-on kind as outgoing finance director Trevor Dighton told Investors Chronicle that management had learned its lesson over the bungled £5.2bn bid for ISS in 2011.

However, there are still very real concerns over the impact of the Olympics fiasco, which along with restructuring left a scar on 2012's results. But this does need to be put into context. Revenue from the UK government accounts for just short of 10 per cent of the group total. G4S's biggest customer in the sector is the Ministry of Justice (MoJ), which makes up 40 per cent of the UK government total. The MoJ said in January that the Olympic contract would not play a role in future decisions; the quality and price of bids will be the key driver.

The newly appointed chief executive of G4S's UK operations, Richard Morris, said in February that they are recovering from the Olympics debacle. There are encouraging signs too. The group was appointed preferred bidder to a department of work and pensions (DWP) contact centre contract in December 2012 and in early March it was awarded the security contract with British Airways at Heathrow and Gatwick airports. All eyes now are on the estimated £300m electronic tagging contract for England and Wales, where G4S is up against Serco and Capita. The MoJ is expected to award the contract around June.

Everything is certainly not rosy at G4S. The decision by three UK police forces to outsource some administrative functions in the UK was halted, and the group was stripped of the contract to run HMP Wolds prison. But these are just as likely to have been due to political resistance to outsourcing in general rather than specific G4S performance concerns. The lowly rating of the shares relative to peers also offers some protection against further disappointments. Indeed, the lowest the shares have been in the last three years was 230p following the failed ISS bid, which in a relatively modest 21 per cent off the current level. So, with good resilience to market corrections, steady dividend growth and a more sensible growth plan, we think investors should lock up some shares in G4S.