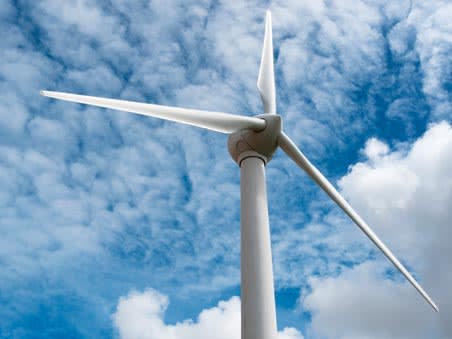 A number of renewable energy infrastructure investment trusts have come to market this year. They offer attractive yields but are already trading at premiums to net asset value

Among the initial public offerings (IPOs) from investment trusts this year, three have come from a new sub sector in the infrastructure sector: renewables. All three issues were very popular, with Greencoat UK Wind (UKW) raising £260m, Bluefield Solar Income Fund (BSIF) raising £130m and The Renewables Infrastructure Group (TRIG) raising £300m. And more IPOs from investment trusts focused on this area are expected during 2013, with names in the frame reported to include Foresight, which already runs a venture capital trust and Enterprise Investment Scheme focused on solar power.

The renewable infrastructure funds are targeting high yields with an element of inflation protection. Greencoat has a target dividend yield of 6 per cent, Bluefield is targeting a dividend of 7p to 9p a year linked to retail prices index (RPI) inflation, starting at 4p in the first financial year, and Renewables Infrastructure is targeting an annualised dividend of 6p a share with the aim of increasing it in line with inflation over the medium term.

Compared with bonds, these levels of income look attractive, especially as they have some inflation protection.

Their revenue typically comes from three sources: long-term electricity contracts, short-term excess supply sold on the wholesale market and long-term pre-agreed subsidies from the government. The government subsidies for the foreseeable future mean that cash flows should be stable.

"Typical dividends of between 5 and 6 per cent a year are below the expected internal rate of return, so excess cash can be reinvested to boost future income generation and provide some protection from uncertainties over the residual values once existing contracts and subsidies run out," says Nick Sketch, senior investment director at Investec Wealth & Investment.

Solar and wind energy are relatively low-tech, which eliminates some risk, and are low-cost once they are in place.

Although this is a new investment trust sector, Ian Barrass, manager of Henderson Value Trust (HVTR), which invests in alternative assets, adds that green energy is not a new area. "This is a proven way of generating electricity and cash flows," he says. "A lot have performed quite well and this area is becoming mature."

Read our interview with Ian Barrass

"We buy wind farms that have been operating for some time as it is important we know what they actually produce, rather than rely on modelled production," says Stephen Lilley, investment manager of Greencoat UK Wind. "We also wouldn't buy a wind farm in construction because we need it to produce income. Our youngest wind farm is two years old and the average age is five years."

Infrastructure also provides portfolio diversification away from mainstream equities, although as the trusts are listed vehicles their share prices could be affected by the direction of the market.

Source: Morningstar as at 31 July

Like many investment trusts with an attractive yield these investment trusts are now trading on a premium to net asset value (NAV). However, they trade at premiums of around 2-3 per cent so are still a lot smaller than the premiums on older infrastructure funds, a number of which trade at premiums of around 10 per cent or more. "Two to 3 per cent is not excessive if you take a long-term view on these trusts," says Charles Cade, head of investment companies research at Numis.

He says it is also likely that the existing green infrastructure trusts may do more capital-raisings. This could provide an opportunity to buy in at a slightly lower premium.

However, Mick Gilligan, head of research at broker Killik, adds that it is not clear when and if these will come to market and that the issues could be structured for the benefit of existing shareholders, so if you are interested in these trusts it could be worth buying the shares on the secondary market at a slight premium.

The renewables trusts have some other attractions versus the established infrastructure investment trusts. Typically they have invested less debt in their underlying investments, while the prices of some secondary private finance initiative (PFI) and public private partnership (PPP) schemes, which some of the older trusts focus on, have been bid up to less attractive levels, according to Mr Cade.

"The renewables funds have to manage greater revenue volatility, but will offer slightly higher yield and Better Capital preservation," argues Richard Crawford, director of environmental infrastructure at Infrared Capital Partners, which manages Renewable Infrastructure Group. "This is because they can generate cash at levels well above the dividend in average and good weather years, which if reinvested, can maintain or enhance NAV. There is generally lower leverage in renewables while offtake contracts and government renewable incentives provide good security of cash flows. But the sector reflects more of a commercial type of risk versus the typical government or quasi-government tenant credit in PFI and PPP projects."

The green infrastructure trusts will be increasingly subject to market pricing, making them riskier than trusts invested in PFI and PPP schemes. But the sort of projects trusts such as HICL Infrastructure (HICL) invest in, for example public sector accommodation and NHS hospitals, have proved themselves. The established trusts are also typically well diversified, and they are large so their shares are easy to buy and sell.

The renewable infrastructure trusts are focused on a single sector, which increases risk.

One of the main risks of investing in renewable infrastructure trusts is regulation, as a good portion of their revenues are based on government subsidies. However, it is unlikely that any changes to the UK subsidy regime would be retrospective, ie wouldn't affect the projects the trusts already invest in. But when there is enough installed capacity and these types of project are more established, the subsidies may be reduced and eventually stopped for projects going forward.

"Some investments offer less certainty over the subsidy aspect, for example some solar investments in 2012," says Mr Sketch. "Generally, existing assets with existing subsidy deals can be trusted, but those still to be built or still to be signed may well face risks. Some have particularly low visibility on what the assets will be worth when the pre-agreed subsidy runs out: most specialists say this is a larger risk for solar assets, but it is hard to generalise. Some have overly generous fees or likely poor ongoing liquidity, while others have greater uncertainty over how much ongoing capital expenditure will be required to keep the assets current, and over how up to date they will be in 10 or 20 years."

Wind revenues, meanwhile, vary from year to year, which could put the dividend at risk in a given year. Solar is more stable: a study carried out by German research centre DLR found that, over a 22-year period, the minimum/maximum deviation of annual radiation was within +/- 5 per cent of the long-term average over the period: significantly lower volatility than wind power.

The Renewables Infrastructure Group has investments outside the UK which also incurs currency risk.

Mr Barrass is also concerned that, if many more renewables funds launch, there will not be enough assets to go around, and that prices will be driven up because there are limited projects. However Mr Lilley argues otherwise, adding that around £40bn of assets will emerge in the next three to four years, mostly from utilities.

If bond yields were to rise the yields on these trusts would not seem as attractive.

He suggests Greencoat UK Wind because the UK government is the cornerstone investor and it has an experienced management team.

The trust also has no debt. "A benefit of this is that in poor wind years we are still able to pay a dividend," says Mr Lilley. "If we had substantial project debt we would need to pay this first and the dividend might be in question."

However, the trust may use bank debt going forward to make acquisitions and subsequently refinance it in the equity markets.

"Greencoat UK Wind is well placed to benefit from the requirement of utility companies to actively sell operational wind assets in order to recycle capital back into development projects as the UK works to meet its legally binding obligation to ensure that 15 per cent of primary energy is derived from renewable sources by 2020," adds Mr Gilligan. "This offering should be an attractive diversifier for a small portion of an income portfolio."

Greencoat UK Wind's cash flow is of a sufficient size that it can pay a 6p dividend and increase it with inflation.

But Greencoat has exposure to offshore wind farms, which have higher operational risk than onshore ones, and has now moved out to a premium of nearly 6 per cent.

With more renewables trusts expected to come to market Mr Barrass says it is important to focus on the quality of their assets and experience of their managers, and not to invest in funds that may have overpaid for assets or injected too much debt. He also advises against investing in trusts that are very small and whose shares are not easy to buy and sell.

He adds that the three existing trusts are all good quality and should grow and become more liquid, with Greencoat UK Wind and The Renewables Infrastructure Group already a good size.

Of the existing infrastructure trusts GCP Infrastructure Investments (GCP) has a mixed portfolio, which includes renewable energy, with rooftop solar accounting for 26 per cent of its assets and commercial solar 5 per cent. However this trust trades at a premium to NAV of more than 10 per cent and it puts debt rather than equity into its underlying investments.

Read more on VCTs and EIS