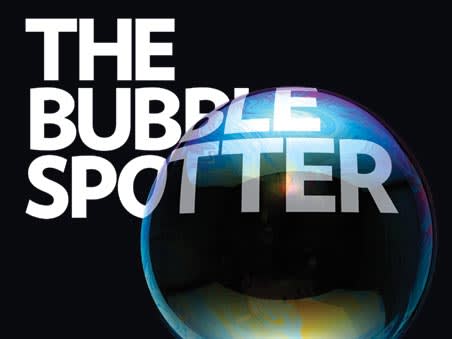 Andrew Smithers correctly identified the bubbles of 2000 and 2007. Dominic Picarda asks him whether QE and corporate buy-backs have merely started the formation of another bubble that's about to pop

Economics has long been nicknamed the 'dismal science'. The term stems from the grim view of humanity that some of its 19th century theories seemed to imply. But 'dismal' could just as well be taken to mean the lousy record of its practitioners in explaining the present and forecasting the future.

This criticism is especially true of those working in the investment business. 'Stockbroker economists' are notorious for blindly projecting today's conditions into tomorrow and almost always failing to see a recession coming.

Andrew Smithers is a very honourable exception among dismal scientists. He has frequently fired broadsides against the cosy City consensus and, more importantly, has a solid record of getting it right when it has really mattered.

In 2000, he was one of very few to give an in-depth warning of the extreme dearness of US equities before the bubble burst. Valuing Wall Street - the book he co-authored and which came out in March of that fateful year - said stocks were at "ridiculous levels" and that the market could halve, which it promptly then did.

Seven years later - just before the credit crunch hit - he wrote again that stocks were overpriced and also that US corporate profitability was at serious risk of falling in both of the next two years. Once more, his analysis was spot on, with both Wall Street and companies' earnings duly crumbling.

Listening to Mr Smithers would clearly have helped us to shield our wealth from two of the worst bear markets in modern times. So what does this most prescient of financial economists make of the situation in the US today?

Both the economic recovery in the US and the bull market on Wall Street will soon be five years old. The S&P 500 has risen by as much as 172 per cent from its lows of March 2009, unemployment is dropping faster than expected, while US house prices lately enjoyed their biggest year-on-year gain since the go-go days of early 2006.

The US stock market seems to depend on corporate buying and quantitative easing.

These conditions are once again breeding a cosy consensus of optimism. According to the longest-running survey of US investment advisers, there are as few pundits expressing bearish views today as there were in March 1987.

Two of the bullish consensus' pet arguments are that US companies are sitting on large piles of cash and that Wall Street is not expensive based on next year's forecast earnings. The S&P 500 is valued on around 15.1 times expected earnings, compared with the long-term average of 14.8.

Smithers on US valuation

Rather than focusing on single-year forecast earnings, Mr Smithers values Wall Street on 10-year "cyclically adjusted" price-earnings (CAPE) as well as in relation to the underlying assets of companies ('q'). On both measures, he is again warning that US stocks are too dear.

"With the S&P 500 at 1699, the overvaluation by the relevant measures [q and CAPE] was 60 per cent for non-financials and 72 per cent for quoted shares," said Mr Smithers in late September. Since then, the situation has worsened, in that the S&P has gone as high as 1814.

One clear advantage of using the valuation metric tools that he does is that they give much greater historical context than forecast earnings, data for which only goes back to the mid-1980s. How do today's valuations square up against past ones, therefore?

He also issues a swift rebuke to those who try to argue otherwise. In his eyes, the bullish valuation case is based on statistical flaws, namely conveniently excluding historical data that doesn't suit their case, and using arithmetic rather than geometric averages in their calculations.

According to the stockbroker economists, the buoyancy of US stocks today is only the start of a new long-term bull market and reflects a likely coming boom in corporate investment and a further significant improvement in earnings.

Mr Smithers highlights rather different reasons for the mighty gains in US stocks in recent years. "The US stock market seems to depend on corporate buying and quantitative easing," he says. "Companies have preferred to distribute cash to shareholders [by way of dividends and share buy-backs], rather than increase their investment in plant and equipment."

In the accompanying chart (below), he shows the influence of corporate buying on Wall Street. On the whole, it does seem to confirm the case that when companies repurchase stock, the market does well, and when they cut back on their repurchases, it can suffer.

The other driving force behind the bull run has been the Federal Reserve's monetary largesse. "The influence of QE is not surprising" says Mr Smithers. "If the central bank buys assets, it is likely to push up their prices."

"When the Fed buys bonds, those from whom they buy can either increase their liquidity or use it to buy other assets and, unless the liquidity preference of investors is rising sharply, the net effect will be to increase other sectors' buying of equities or at least to reduce their need to sell.

Amidst all the liquidity, Mr Smithers stresses that, even though companies have slowed their buying of stock lately, households have switched from being net sellers to net buyers of equities.

US companies are widely believed to have big financial power. After all, they are sitting on $1.6 trillion (£96bn) of cash and similar assets, or about 10 per cent of US GDP. Stockbroker economists often argue that these resources could either form the basis of an investment boom or be used for further share buy-backs.

According to Mr Smithers, though, the headline number doesn't tell the full story. He notes that companies' levels of cash compared with debt have been falling - the purple line on the below chart. "The ratio of cash to debt is below its average level, not only when measured over the whole period, but when compared with the past 50 years," he says.

What's more, he says the outlook for corporate cash flow is negative. The US government is set to try and pare back its large deficit next year, an improvement that will have to come at the expense of another sector of the economy. And given the financial state of households and foreigners, Mr Smithers thinks that the offsetting cash-flow fall will happen in the corporate sector.

What next for US equities?

As Mr Smithers points out, today’s lofty US valuations are in line with those at the start of lengthy periods of hardship for stocks such as 1906, 1936 and 1968. At the same time, it is well shy of the extreme valuations of 1929 and 2000. So, while Wall Street may not be in bubble territory today, it is at risk of reversal - and perhaps quite soon.

"The US equity market is overpriced and going up. While we are not yet calling an end to this, we see it drawing to a close," said Mr Smithers. "The decline in corporate buying is likely to continue, and if QE is tapered as expected the outlook for US equities in 2014 is poor."

You can see Andrew Smithers talking to me about his outlook for the UK economy, as well as his predictions for the US and Japanese stock markets in this video: http://bit.ly/SmithersOn2014.

■ Andrew Smithers' new book The Road to Recovery: How and Why Economic Policy Must Change is published by John Wiley (priced at £18.99).