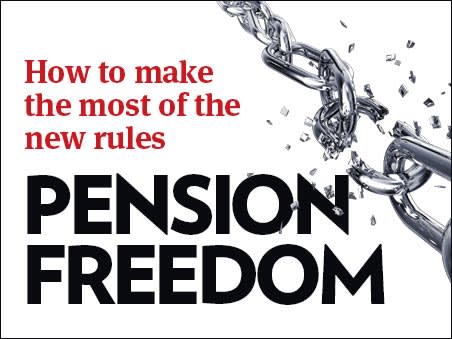 We explain the new pensions rules coming into play in April

From 6 April 2015, investors over the age of 55 will have complete freedom over how to take money out of their pension. This includes the ability to cash in your pension in full on the first day of retirement, if you so wish.

It's great that we no longer need to talk about pensions, draconian rules and lack of flexibility in the same breath. In 2011, I wrote: "In essence, a pension is a tax wrapper that gives you income tax relief on the way in, tax-free growth and a 25 per cent tax-free lump sum on the way out. The trade-off is a lack of flexibility, draconian rules and market forces (annuity rates) that you have no influence over."

From 6 April 2015, a pension will still be a tax wrapper that gives you income tax relief on the way in, tax-free growth and a 25 per cent tax-free lump sum on the way out. The remaining trade-off will be that you still won't be able to access the income until age 55 – or later, if you are aged under 40 as the age restrictions will rise in line with increases in state pension age. Pensions are certainly more attractive than before - there are even predictions that 'pension bank accounts' offering cashpoint access to retirement funds could be a reality by 2020.

Research by TD Direct Investing found that two in every five Brits (40 per cent) plan to withdraw a significant portion of their pensions when the changes come in.

However, although the new pension freedoms will introduce greater financial planning flexibility for investors who have multiple assets, such as large individual savings accounts and buy to let properties, many investors will still want to secure a guaranteed income for life. Others will be drawn to the flexibility of income drawdown, whereby income is drawn directly from a pension, but will fret over how much income to take and how to make their pension money last for a 20-40-year period. There used to be strict rules on how much you could take from a pension via drawdown, but these have now disappeared – income can be taken at any level provided there is money in the pot.

One thing is certain, if you've been saving for 30 years, you're not going to squander your money in one go on a Lamborghini. For a start, anything taken from a pension over the 25 per cent tax-free cash will be taxed at your marginal rate of income tax. While research shows that the tax impact of drawing greater sums from a pension is not widely understood by the public, more sophisticated investors will be working hard to minimise taxes across the board.

David Smith, financial planning director at Tilney Bestinvest, says: "With both annuities and drawdown, up to 25 per cent of the plan's value can normally be paid tax-free. With an annuity, the guaranteed income is treated like income and is subject to income tax if the person's total income exceeds the recipient's personal allowance. Pension income is not, however, subject to National Insurance.

"In drawdown, income taken from the fund is treated the same as annuity income. Those looking to go into drawdown should therefore consider whether accessing a large percentage of their pensions, or indeed taking their entire pension as a lump sum, could push them into a higher tax bracket. Even relatively small pension pots could therefore, at least in part, be subject to higher income tax rates."

The announcement of pension freedoms has halved annuity sales but doesn't mean the end of annuities entirely. What is more likely is that the annuity industry will move to individual underwriting and investors will tend to buy annuities later on, say after age 75 when their state of health in older age is known.

However, further rule changes announced in December 2014 possibly make annuities less appealing at later ages too, particularly for investors with large pensions. The chancellor effectively announced the freedom to pass any drawdown pensions remaining in the pot at death to your family, after tax. With a fixed annuity any remaining funds are not available to be passed on post death unless the retiree dies during a guarantee period or has incorporated an entitlement to a spouse's pension.

These developments are good news for investors who prefer to use an income drawdown strategy. Anticipating increased interest in income drawdown, many providers have simplified or dropped their costs. Tilney Bestinvest has joined Hargreaves Lansdown and Alliance Trust Savings in launching new drawdown pricing, with other providers expected to announce new pricing in due course.

Many in the industry are concerned that the greater choice and flexibility of pensions means more complexity and increases the likelihood that people will make the wrong decisions.

David Woodhouse, head of advice services at independent financial adviser Chase de Vere, says: "We welcome the new pension changes, which will provide fantastic financial planning opportunities for many. However, we have real concerns that some people will make the wrong decisions, including taking too much too soon from their pensions, and their and their family's future standard of living could be affected."

Buy-to-let investments pose the most obvious risk of mis-selling. Neil Lovatt, product director at Scottish Friendly explains: "In 2004 the government proposed to enable the purchase of residential property within a Sipp, which caused an unseemly tidal wave of marketing by the buy-to-let sector. Fortunately, just as the great transfer of assets in pensions to property was about to get under way, the Government had the courage to U-turn on its proposal.

Other risks include the proliferation of fraudulent investment schemes targeted at the over 55s. Tom McPhail, head of pensions research at Hargreaves Lansdown, says: "We see this as probably the biggest risk, in terms of potential consumer loss and worryingly it is one the government has done precious little to address. Pension fraudsters have already 'liberated' hundreds of millions of pounds of pension fund money in recent years, using scam pension schemes. From 6 April they won't need to set up scam pensions any more because they can simply target the over 55s with seductive offers of 'too good to be true' 'guaranteed' investment schemes."

The final risk is that the pension freedoms will be scaled back in some form. The chancellor's latest Budget contained some bad news for people with large pensions as the lifetime limit on pension savings will be reduced to £1m from April 2016. Pensions certainly seem to have turned into a political football with rumours of further reductions to tax reliefs and allowances to come.

At a November 2014 conference held by AJ Bell, 64 per cent of the 300 financial advisers attending said they did not believe the new pension freedom rules would last more than one year after the May General Election, in the event of a change of government. 60 per cent of delegates said they felt the new pension flexibility rules have gone too far. The biggest fear among advisers was that any political uncertainty could create a 'buy now while stocks last mentality', with pension investors feeling they had to act quickly before any further amendments to the rules and possibly encashing their pensions regardless of whether they have a need for the money or not.

Taking funds from your pension – the case for and against

The new pensions rules can only be used by investors in defined-contribution pensions. This may lead to lots of employees with private sector defined-benefit pensions looking to transfer out of their workplace pensions into self-invested personal pensions. However, people in public sector pensions won't be able to benefit from pension freedoms.

More than half a million DB scheme members are set to transfer, according to Hargreaves Lansdown. However, it is crucial to make sure the transfer value offered adequately reflects the valuable benefits that you are giving up. Hargreaves says it is common that investment returns of between 8 per cent and 10 per cent are required every year to provide equivalent benefits, should a transfer take place. This makes transferring before retirement unrealistic for even the most bullish investor. Those with a financial dependant should pay particular attention to the pension payable in the event of their death. Often at a level of half or two-thirds of the pension payable to the member, these dependant's pensions can often be more valuable than the transfer value by themselves.

Four reasons to transfer from a DB pension

1.You don't expect to live long

The perception of 'not getting your money back' is a powerful motivator for a transfer. Those who are in ill health with no dependants may benefit from transferring in order to maximise the pension payments during their lifetime.

Your DB scheme rules could scupper your plans to finish work or reduce your working hours between the ages of 55 and 65. Almost a quarter of those looking to transfer a DB scheme wish to do so to enable early retirement (source: Hargreaves Lansdown)

If you doubt your employer will be around to pay your promised pension in retirement, you might want to transfer your benefit away. This particularly applies if you have a large pension and are some years from retirement. The Pension Protection Fund limits the compensation it will pay before your reach normal retirement age. The cap for those aged 60 is currently £32,428 a year. After normal retirement age, it offers 100 per cent protection.

4.You want to leave your pension to your children

defined-benefit schemes only pay out for the life of the member and their dependants. Now the 55 per cent death tax on pensions has been abolished, a transfer could make sense in orders to provide a legacy for future generations. However, you have to be confident of managing your pension and drawing a sustainable income in order to keep your capital intact.

In Budget 2015, George Osborne announced that those who have already bought annuities will be able to cash them in, if they wish. This extends the greater pensions freedom and flexibility announced in the last Budget from those not yet retired to existing pensioners.

However, there are real concerns that individuals will be charged excessively high fees to cash-in their annuity and can expect poor value in return for them.

Andrew Tully, pensions technical director at MGM Advantage says: "There is significant customer risk from the idea of creating a second-hand annuity market. The issues are complex but I can't see how exchanging an income for cash upfront at a significant discount would make sense. From our calculations, you could lose 30 per cent or more of your potential income because of costs and upfront tax."

Sheila aged 61, purchased her annuity in December 2013, right before Budget 2014 and the new freedoms being announced. Sheila had a life expectancy of 18 years due to high cholesterol and high blood pressure and got an enhanced annuity rate of 6 per cent on a pension worth £60,000 (£3,600 a year). Having heard the stories about the new flexibilities, Sheila decides to see what it could mean for her if she sells. Unfortunately, since December 2013, her health has deteriorated and her life expectancy is now likely to be nearer 14 years.

How tax and fees affect an annuity sale