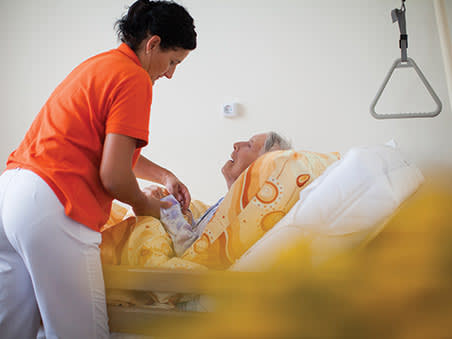 Care homes have found themselves back in the headlines lately, reflecting concerns that serious funding issues may force the closure of up to a quarter of the UK's elderly, social and mental care homes. There are roughly 20,000 care homes in the UK, which are operated by 5,871 individual owners - the majority of which are private equity companies or real-estate investment vehicles. Some of these are listed in the US, and two - Cambian (CMBN) and CareTech (CTH) - have London listings.

As financial issues threaten the closure of around 5,000 care homes, questions have been raised as to whether private equity or public limited companies - whose priority is making money for shareholders - should be running organisations whose duty, it is argued, should be to provide the best care for those in residence.

Funding at the heart of the problem

Social care in the UK is, in part, funded by the state and many care home residents have their fees paid for by local councils. But, according to the charity Age UK, government funding for care operators fell by more than 20 per cent between 2010 and 2014. Plus, as funding has fallen, staff costs have been on the rise as care homes have had to turn to agencies, which charge hefty fees, to help them recruit. This problem has been exacerbated by the national living wage (NLW), which came into effect on 1 April 2016 and means that care homes now have to pay all staff over the age of 25 at least £7.20 an hour.

A 2 per cent increase in council tax, which also came into effect at the start of April, was meant to help mitigate the effects of the national living wage on social care. However, although 90 per cent of local councils chose to enforce the tax increase, care home operators have reported that they are yet to see the benefits. Britain's biggest care home operators, including Bupa and Four Seasons, even met with the Department for Health due to concerns that the cash from the higher council tax may not be seen by homes in time to avert closures.

Consequences of the funding squeeze are far-reaching. According to a report published by industry analysts Laing Buisson "there is a real and imminent danger of a care home bed capacity crisis hitting many localities in the course of the next few years".

There's also evidence to suggest that the quality of care provided is being compromised. The Care Quality Commission recently reviewed 4,294 adult social care homes in the UK and found that while only 1 per cent were "outstanding", 7 per cent were "inadequate" and a third "required improvement". It is likely that this is largely due to staffing shortages - cash-strapped care homes are recruiting only the minimum number of staff that they are required to by law, meaning the standard of care at many has fallen below expectations.

Quality of adult social care in the UK

Fit to run a care home

Many companies that own care homes operate them as though they belong to a traditional real-estate portfolio, borrowing against the value of the properties in order to secure financial flexibility. However, according to research compiled by BBC Radio 4's You and Yours programme, this has left a number of homes carrying huge amounts of debt and, thanks to recent pricing pressures, without enough profit to cover loan repayments.

At the end of April such issues were thrown into sharper focus when Elli Investment Limited, the parent company of Four Seasons, released its 2015 financial report. Four Seasons' services are predominately funded by the public sector, and in 2015 average weekly fees were at least £40 under the fair price of the care being provided (as calculated by Laing Buisson). This led to an almost £200m increase in operating losses to £264m last year, while net debt at the year-end reached £510m. Last week, credit rating agency Moody's warned that the financial structure of Four Seasons, which has 440 care homes and 18,500 residents, was likely to be taken over by creditors as it would not be able "to service material levels of cash to pay debt going forward".

Cambian is another company that has been feeling the strain from the industry pricing pressures. Rising staff fees, accompanied by "inefficient cost management" led to widening losses in 2015 and, more worryingly, put the group at risk of breaching banking covenants. With short-term borrowings of £255m, but current assets only worth £71m, Cambian has had to renegotiate its leverage with the banks and remains in a risky position.

Worryingly, Four Seasons and Cambian are not alone in their funding issues. Research from the insolvency agency Opus for the BBC found that 13 per cent of care homes pay more in interest and servicing their debt than they make in profits. The situation brings back memories of former listed group Southern Cross, once the biggest care home operator in the UK, which collapsed in 2011. The group had expanded rapidly by selling leases on its homes, but when public spending cuts reduced resident referrals, the group went into financial meltdown and was forced to allow landlords to take over the homes to avoid a mass closure.

Not all doom and gloom

This being said, CareTech, the other London-listed care home operator, has been effective in restoring faith in the care home business model. CareTech too carries high levels of debt, and had to pay £6.7m of interest on its loans last year. But these financing costs and ongoing capital expenditures are easily covered by operating cash flow of £27m. Costs are well managed - sales and administrative costs were 64 per cent lower than Cambian's in 2015 - and the company is profitable. It is also generating cash with sufficient headroom to help fund the purchase of new care homes and has recently completed two acquisitions.

For CareTech the business model seems to be working, proving that with effective management, care homes can be operated well by private equity. However we still feel that there are two main issues with the sector. First, does good business mean good care? It certainly seems logical that a business that is well managed and making money is going to be providing better care for its residents. But, with companies trying to make money for shareholders, cost-cutting may well come at a price to the quality of care. This being said, keeping shareholders happy is vital to keep funds flowing. Second, just what are the investment upsides? Investing in a company like CareTech or Cambian is very much like investing in a property company, where shareholders hope to make good returns on their investments as the value of the land in ownership increases. It's hard to see an upside in the land value as land used for care homes tends to be fit for purpose.

Industry concerns aside, CareTech remains our favourite for those wanting to invest in the sector. A recent trading update suggested that the first half of 2016 has been a good one, in which the group has seen a stronger performance on "all the key financial metrics". At 248p, the shares trade on just seven times 2016 earnings, and come with a decent dividend yield of 3.5 per cent. Even more attractive income can be garnered from Primary Health Properties (PHP), which runs 280 purpose-built medical centres across the UK. PHP generates income by renting its properties to the Treasury, via GPs, and therefore has a strong revenue stream.

Very much on the back foot is Cambian, whose 77 per cent fall in share price in the past 12 months keeps our rating neutral. Widening losses and heavy debt can't have been helped by the £9m chief executive Saleem Asaria earned by way of salary, bonuses and shares in 2014 - generous remuneration for a company accused of poor management.

The care home industry is expected to be significantly affected by the new living wage legislation - and in particular those care home and homecare operators with local authority funded residents.

With staff costs on average representing about 60 per cent of the cost base for a care home and most care workers qualifying for the living wage, the new legislation will materially increase the cost base for operators. As the sector is regulated with clear guidelines on minimum levels of service provision, providers have limited flexibility when it comes to reducing staffing costs. To mitigate this increased cost of care provision, operators will therefore have to look to charge higher fees to residents.

Local authorities have been reducing rather than increasing the fees paid for elderly care provision. Indeed Laing and Buisson estimate that a third of local authorities did not introduce a fee uplift last year. As a result, the new living wage legislation will further destabilise an already financially challenged segment of the care home sector.

According to Laing Buisson, approximately 60 per cent of care home residents are funded by local authorities, meaning a large number of operators will now face an uncertain and challenging trading environment going forward in which certain homes become financially unviable and the sector sees a higher level of home closures. As a result, both large and small operators will need to revisit their overall business strategies to adapt to this new landscape.

In summary, until the government and local authorities clarify their capability and willingness to address the costs of delivering such elderly care provision, we expect the living wage legislation to create an even more challenging trading environment for many local authority care home operators.

Rob Harding is a partner in Restructuring Services at Deloitte