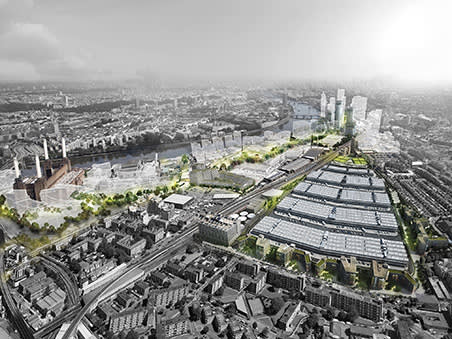 EU jitters are keeping St Modwen off many investors' radar, but we think there is plenty of locked-in value to be crystallised

Shares in St Modwen Properties (SMP) have clawed back all the losses sustained in the wake of the referendum, but investors' jitters mean they still trade at just two-thirds the book value. This looks misplaced for several reasons, not least the fact that nearly half of the development arm is already pre-let or pre-sold. And, of the 33 schemes at the start of the last financial year, a total of 19 were either sold in the 12 months to November, or matured, and are now generating income.

Despite all of this, St Modwen lives in the shadow of concerns about the central London Nine Elms development, where the existing New Covent Garden will be accommodated into a smaller space, freeing up 10 acres of prime development land. The worry, exacerbated by the referendum, is that St Modwen is sitting on a white elephant. We think this looks misplaced, and anyway Nine Elms is just 10 per cent of net asset value (NAV).

And there is now a new chief executive, Mark Allan, who was previously at student accommodation specialist Unite (UTG). He has already started a strategic review of the business and, while there is nothing set in stone, the Nine Elms site is up for sale. St Modwen is also assessing its options on the 2,000-bed student campus at Swansea, and if the two were sold off, it could bring in around £200m. With a modest loan-to-value ratio of 30 per cent, the windfall could mean a capital return for shareholders.

Around two-fifths of the development portfolio by expected completion value is focused on industrial and logistics properties, and while profits were lower in 2016 as a result of the pause in activity that followed the referendum, the pace of development has since recovered. The commercial pipeline comprises 700,000 sq ft of pre-let accommodation, while the 900,000 sq ft of speculative development is centred on the fast-growing markets of the Midlands and south-west.

St Modwen is also busy in the residential construction market, and profits at St Modwen Homes jumped by a half last year on sales of 485 units. A further 402 units were sold through a joint venture with Persimmon (PSN), which is being scaled back. By February, around half of total targeted sales for the year to November 2017 were already secured for the division. Some of the land is also being pulled through the planning process to be sold on to other builders 'oven ready', and last year 42.7 acres was disposed of for £47.6m.

On the investment side, the income-generating portfolio is worth around £787m, and last year delivered rental income of £45.9m from more than 1,700 tenants. Within that portfolio, phase two of Longbridge town centre in Birmingham (the old British Leyland plant) is now complete and over 95 per cent let to a number of leading retail outlets. This now provides rental income of £4m, and the third development phase is due to start later this year. The £100m invested in the regeneration of Edmonton Green, Enfield, since 1999 is now virtually fully occupied, and generates £4.3m rental income.

St Modwen has considerable unrealised value in its portfolio comprising around 6,000 acres, although Brexit uncertainties have made investors unduly cautious about embracing this potential. The dividend payout is rather modest, too, although St Modwen is a value-creation story rather than a high-income provider.

An ability to generate double-digit returns from its own activities (Peel Hunt forecasts returns of 10 per cent are achievable even in a flat market) is a key attraction for St Modwen. The development arm is being carefully managed and centres on the commercial side, where demand has held up well, especially in the regions. There is always a risk running a speculative development, but we think St Modwen is largely in the right sectors, and its housebuilding arm is also making a useful contribution. So, given the shares trade on such a wide discount to NAV, we think there is more value to come. Buy.