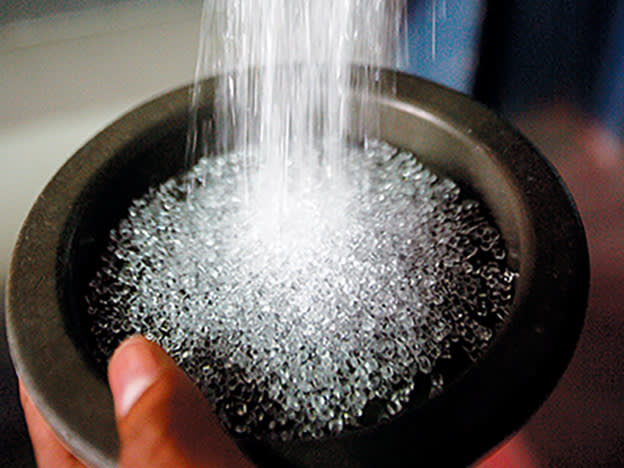 At the moment Victrex is arguably in a sweet spot of profitability, but can that continue?

Victrex (VCT) is the biggest producer of a high-end plastic material (often called a polymer) called PEEK. PEEK is very strong and light, and can be made into lots of value-added and problem-solving products. Victrex is the largest producer of PEEK in the world, with annual capacity of just over 7,000 tonnes and has built a reputation for making high-quality products.

The company’s strategy is to move away from the upstream manufacturing of PEEK, which is very price-competitive, to downstream manufacturing of value-added parts in target markets. If it can successfully do this, then it stands a good chance of preserving its very high levels of profitability. Last year, its profit margins were 38.9 per cent and its ROCE was 24.8 per cent.

A large chunk of the company’s PEEK production is sold to value-added re-sellers, with the rest focused on five key sectors – automotive, aerospace, electronics, energy and medical. Its products are found in cars, aeroplanes, medical implants, high integrity seals in the oil and gas industry, mobile phones and industrial machinery, as well as thousands of other products that benefit from the strength and lightness of PEEK.

The business is also dominated by overseas sales, which means that changes in foreign exchange rates can have an impact on reported profits.

Currency movements worked in Victrex’s favour and helped to boost revenues by 12 per cent and profit before tax by 15 per cent. The annual dividend was increased by 11 per cent and was complemented by another special dividend.

I like the company’s ambition to move away from competitive polymer markets, but do have some concerns about its business.

At the moment, the business is arguably in a sweet spot of profitability. As much as 83 per cent of its revenues come from industrial markets such as aerospace, automotive, energy and electronics. These markets are currently doing well for Victrex, but they are cyclical and are likely to turn down at some point in the future.

Its medical business (17 per cent of sales) is not really growing, as it is exposed to a very mature US spine market.

The company’s future profitability and margins largely rest with the success, or otherwise, of value-added and semi-finished products that command higher prices. These include products such as PEEK gears for cars, loaded brackets for aeroplanes, advanced pipeline materials, dental and knee products.

Victrex is making good progress in attempting to win large new orders in areas such as gears and aerospace, but these so-called mega programmes only account for 4 per cent of total sales. The progress towards getting them to be 10-20 per cent of sales is very slow.

Stock levels could rise by £10m next year due to stockpiling in order to mitigate any disruption from the UK leaving the EU.

The bad news for shareholders is there was a significant slowdown in sales volumes during the second half of 2018 and that trend has continued. In 2019, no growth is expected from consumer electronics products due to the absence of a large order that was fulfilled in 2018, while automotive demand is softer. Throw in a currency headwind and very little profit growth is expected in 2019.

Victrex shares have fallen by more than a quarter during the past three months and have seen a de-rating in their valuation. At 2,302p, they trade on a one-year forecast rolling PE of 17.4 times. This would fall to 16.5 times when taking into account its net cash position.

It’s worth noting that the company’s post-tax profits receive a significant boost from the UK government’s Patent Box scheme. This allows companies to benefit from a lower tax rate for the length of qualifying patents. Consequently, Victrex is expected to have a tax rate in the range of 10-13 per cent over the next few years. The Patent Box reduction saw its tax bill reduced by £8m last year, compared with £11.9m in 2017, and saw its post-tax profits nearly 8 per cent higher than they would have been without the benefit.