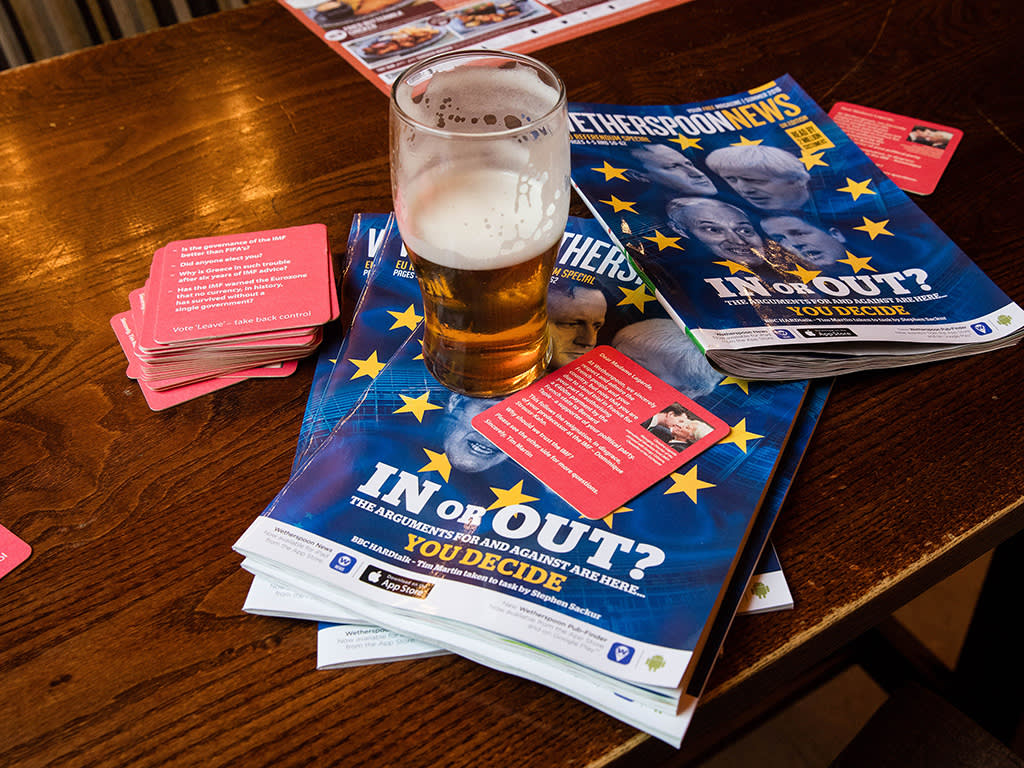 Has time been called on JD Wetherspoon's growth prospects?

The pub operator has been the standout performer in a difficult sector. Despite strong sales growth, rising costs and a slowdown in new pub openings suggest that growing profits in the future is going to be difficult

Very few companies can prosper for long periods of time. Like humans, many go through a life-cycle. They start off and can often grow rapidly for many years. Then growth slows down before moderating if they are lucky. Other companies stagnate and even decline and die. JD Wetherspoon (JDW) has been better at growing and standing tall in a very difficult pub sector. However, recent results suggest that it too may struggle to get much bigger. What does the future hold for this company?

JD Wetherspoon is one of the largest pub operators in the UK with 879 pubs and current annual sales of £1.75bn. The company has a very simple business model that aims to sell food and drink to its customers at reasonable prices in pubs that are maintained in good condition. It is a strategy that has served it and its shareholders well.

Wetherspoons is arguably the UK’s best performing pub owner and operator and has consistently delivered sector-leading levels of sales growth. While dividing opinion among pub goers, there can be no doubt that its way of doing business has been a tremendous success since it opened its first pub in 1979.

As well as taking over existing pubs from other operators, it has been remarkably effective at converting disused cinemas and banks into thriving pubs. After initially opening pubs within the M25, it has branched out of London to become an established name on Britain’s high street.

For me, the secret of Wetherspoons' success is that it has been able to communicate value for money to its customers better than all of its peers. The cost of a pint of beer and a plate of food is often much cheaper than nearby pubs. This has often led to disparagingly snobbish remarks by some about the clientele its pubs attract but others could do well to follow Wetherspoons’ lead in my view.

Companies that communicate value for money often do well over the long haul and generate considerable amounts of customer loyalty and valuable repeat business. This is a strategy that has been the secret behind many successful consumer retail businesses, including Greggs (GRG) and discount supermarkets as well as McDonald's, Amazon (US:AMZN) and US wholesale retailer Costco. It is a very difficult strategy to compete against.

The company has kept things simple and created a business that succeeds by selling more food and drink rather than charging higher prices. This volume-based approach has allowed Wetherspoon to become a source of growth for its suppliers over the years, which has allowed it to negotiate better prices to pass on to its customers. This virtuous circle has been a key driver of the company’s ability to consistently outperform the UK pub sector in terms of like-for-like sales growth.

As well as its low prices and well-invested pubs, the company’s pubs have led the way in trying to attract more customers, including:

Despite this well-used recipe, life has been very hard for Wetherspoons and the UK pub industry over the past decade. A combination of weak wage growth, a smoking ban in pubs and a difference in the taxation of food between pubs and supermarkets has seen lots of pubs close and many struggle to grow sales.

In recent years, costs in the form of higher wages and business rates have taken a bigger bite out of company profits. So much so that growing them may become very difficult for some time.

One of the big problems I have with investing in pubs is that they don’t produce very good returns for investors. Sales growth is hard to come by, cost pressures are high and significant amounts of cash need to be invested to defend a competitive position.

If we look at some key financial performance measures, Wetherspoons has proved to be fairly good at generating sales but turning those sales into trading profits and free cash flows has become more difficult in recent years.

The company’s capital turnover – the amount of sales generated per £1 of money invested – has held up well. Profit margins and return on capital employed (ROCE) have been on a downwards trend over the past decade. The free cash flow margin is based on ‘stay in business’ capex rather than all the money invested in the business. Wetherspoon is a reasonable business but would not be one that is likely to be highly sought after by quality investors.

The trend of better sales performance is also shown quite clearly when looking at performance on a per pub basis. Average weekly sales per pub have ticked up, but operating profit per pub has fallen significantly during the past two years and is almost back to the level it was a decade ago.

Wetherspoons is also changing its pub opening strategy. The number of pubs peaked in 2015 but the ownership structure of them has changed significantly over the past decade, with the company spending £263.2m on converting pubs from leasehold to freeholds since 2011. This has given the company a lot more asset backing and valuable flexibility to manage its pub estate to changing trading conditions going forward.

Wetherspoons’ accounts give the investor a lot of information to help them understand what is going on with the finances of the business. It shows the amount of money spent on maintaining the existing pub estate and how much is spent on new pubs, extensions and buying freeholds. The two capex figures paint very different pictures of how good the company is at generating free cash flow.

If we just consider maintenance capex, then Wetherspoons is generating a reasonable amount of free cash flow – just over 8 per cent of revenues on a trailing 12-month basis. Looking at all capex, the free cash flow performance is more muted.

The subject of maintenance capex is one of the most hotly debated among serious investors looking to work out a company’s true profits. It is a complicated subject and often doesn’t give clear-cut answers. It refers to the amount of money spent on replacing assets. This is classified as investment spending and is shown in a company’s cash flow statement. This is different from repairs and maintenance expenditure, which is an operating cost and expensed against revenues in the income statement.

For example. Wetherspoon has 897 pubs. What you want to know is how much the company has to set aside on average each year to replace things like furniture, lighting, bar and kitchen equipment. Depreciation is supposed to give a rough guide to this but cannot always be trusted.

When Wetherspoons talks about spending on existing pubs it is probably not referring to spending on all of its pubs. Maintenance capex spending is lumpy depending on the age of the pubs. Depreciation applies to all the pubs’ assets and spreads the cost of the assets in them over their useful lives.

I don’t think so. This is because depreciation applies to all pubs whereas the cash spent does not. The important thing to note is that maintenance capex has been rising in recent years as the investment cycle in pubs has been getting shorter. Pubs need refreshing around every six years these days compared with 10-11 years not so long ago.

The other thing to keep an eye on with Wetherspoons is spending on repairs and maintenance. Twenty-five years ago the requirement was around 2 per cent of sales. It is now running at more than double that rate and is eating into profit margins.

The rising cost of replacement and repairs does not bode well for profit margins and will need significant sales growth to offset these pressures.

Perhaps the biggest threat to profits is rising wage costs. Wetherspoons has a good reputation for looking after its staff and has good retention rates. This comes at a cost of paying more than minimum and living wage rates, cash bonuses and the award of shares. Staff costs are reducing margins and have increased significantly as a percentage of sales in recent years.

This is a trend across the sector. Looking at a similar pub operator without a brewing business, Mitchells & Butlers (MAB) has a staff costs to sales ratio of 31.4 per cent. Revolution Bars (RBG) has a ratio of 29.8 per cent.

In short, it could be very difficult.

Despite LFL sales growth in the first 32 weeks of the current financial year being up by 6.9 per cent, rising wages, repairs and utility costs will offset this and as a result profit is not expected to grow this year.

The size of the pub estate is not expected to grow much either. It seems that Wetherspoons has not been entirely happy with the quality of it in recent years and has sold nearly 100 pubs. In some locations, the company has said that it has overinvested and has generated inferior returns as a result.

Share buybacks have been a source of EPS growth in recent years vis a shrinking share count, but no shares have been purchased so far this year.

Net debt levels have risen in recent years due to buybacks and freehold purchases and now stand at 3.5 times EBITDA. The company expects it to remain at around this level for a while, which is slightly at odds with analysts’ forecasts which currently predict a decline over the next few years. Could this be a sign that analysts’ profit forecasts are too high?

The company continues to state that it is targeting a long-term net debt to Ebitda ratio of 0-2 times. With the outlook for profits growth not that promising this is only going to come from using free cash flows to reduce debts instead of buying back shares or freeholds.

From a customer point of view, I think there’s still a lot to like about Wetherspoons. From an investor’s viewpoint, things don’t look as appetising. The shares have performed well so far this year and are up by more than 22 per cent. At 1,367p, the shares trade on a one-year forecast rolling PE of 17.7 times. That looks pretty punchy for a business with very little profit growth in a difficult sector.