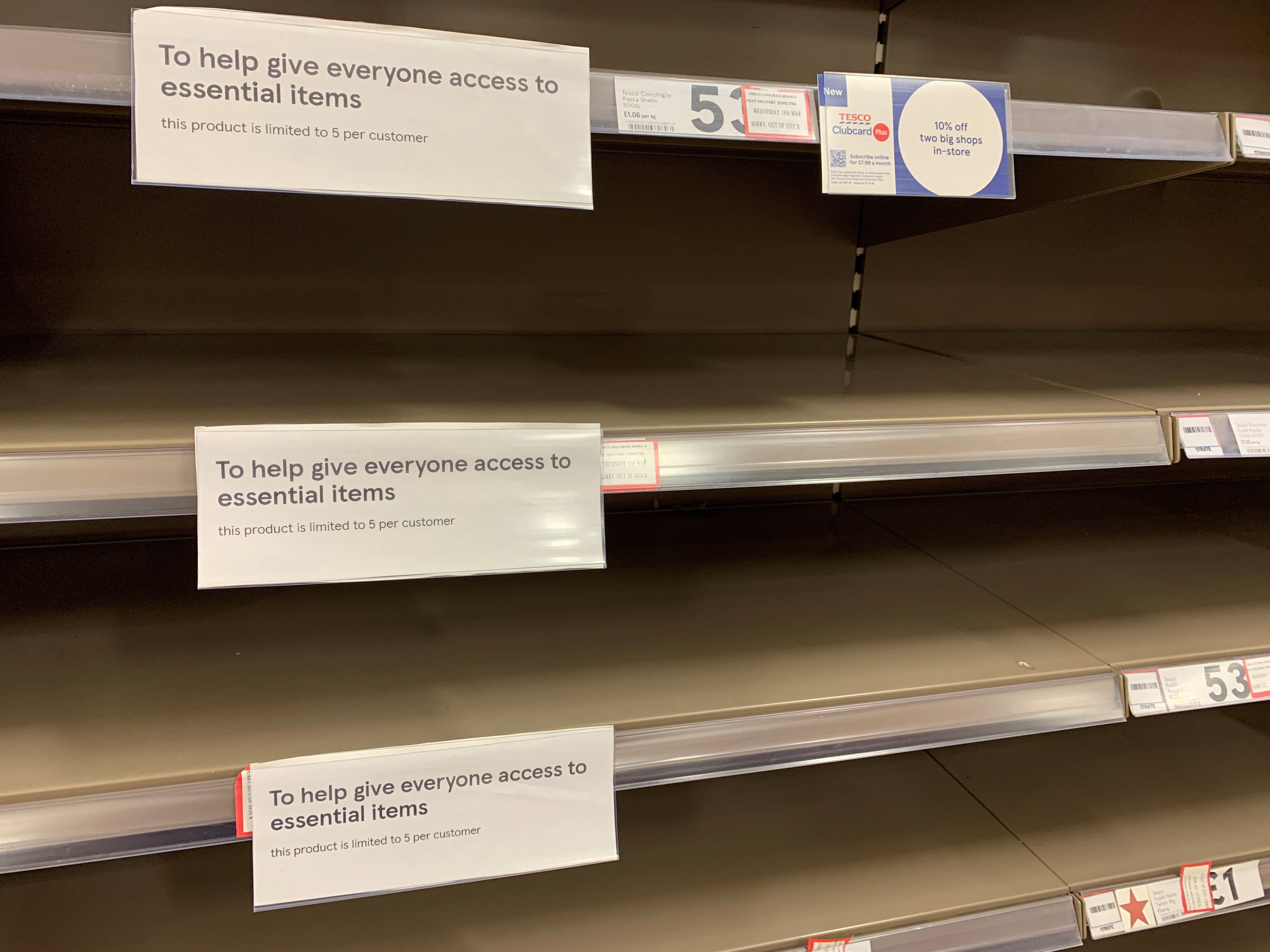 How coronavirus will impact supermarkets

Supermarkets are facing an unprecedented spike in demand

Your local Tesco (TSCO) outlet is currently a scene of wartime anarchy, ransacked of toilet roll, hygiene products and store-cupboard goods. Covid-19 has had a seismic impact on the operations of supermarket groups, prompting Wm Morrison (MRW) to cancel plans to award a special final dividend in its results this week as it looks to conserve firepower for the months ahead.

We are waiting to see how the situation will be reflected in other supermarket groups’ financial performance. For now, we know that the early throes of coronavirus panic-buying did not translate into a February sales surge for all of the large grocers. Sainsbury’s (SBRY) alone recorded a sales boost, according to research house Kantar, posting a 0.3 per cent year-on-year increase – which returned the group to growth for the first time since October 2019.

The outbreak also poses risks to supermarkets, which may struggle to manage their workforces and inventories. Even a small labour shortage will likely create gaps in the supply chain, the effect of which will be compounded by stampeding customers.

But the giants of this unloved sector have not seen the steep share-price falls witnessed across other retail areas and the markets more broadly. The likes of Tesco and Morrison, whose valuations in recent times have been squashed by Brexit uncertainty, the rise of discounters and online disruption, appear solid defensive bets amid the rolling chaos of Covid-19.

Covid-19 has sparked an extraordinary and unsustainable rise in demand for non-perishable products in supermarkets. Hand sanitiser sales rose 255 per cent in February, according to Kantar, and the UK’s leading supermarkets have signed a joint letter appealing for customer restraint in the aisles. Many have imposed limits on the quantity of goods that can be purchased.

Still, the supermarkets will do well over the next month or two, in the view of Shore Capital retail analyst Clive Black, although the rush to buy non-perishable goods is a zero-sum game for them. After a tough 2019, Morrison has recorded a 5 per cent like-for-like increase in its retail contribution for its first six weeks in 2020, with this having risen to mid-teens in weeks five and six. “The stocking up will be manifested by destocking further down the line,” Dr Black says. The availability of car parks is one factor that will favour bigger supermarkets over smaller outlets and convenience stores, while an expected decline in eating out will shift our consumption of calories out of restaurants and into our homes.

Over a third of calories are currently consumed outside the home, Dr Black adds, and any shift in consumer behaviour will come at the considerable benefit of supermarket groups. Restaurant Group's (RTN) shares have lost more than 80 per cent of their value since the start of the year and analysts expect second-quarter sales for its leisure, pub and Wagamama segment to decline 68 per cent, reflecting the vulnerability of the dining sector to this crisis.

Designed with supply shocks in mind

Supply chain management will be key, and while supermarket supply chains are tight, they are also designed with supply shocks in mind. Supermarket groups have spent months in the run-up to Britain’s departure from the European Union planning for a no-deal scenario, in the process becoming more resilient to unprecedented threats to supply. Supermarkets have also had to maintain their supplier relationships. Morrison has pledged immediate payments to smaller suppliers, and is temporarily reclassifying a small supplier from a company with £100,000 of business with Morrison up to £1m. Although the exact impact of this change is difficult to quantify at present, it represents a step-change for Morrison, which like its other big three listed counterparts is a negative working capital business, meaning that it will often pay its suppliers after generating income from their product.

Bruno Monteyne, head of European retail at Bernstein, envisages some financial harm to supermarkets, but the former Tesco supply chain director believes that the industry is well prepared for disruption. In a note at the beginning of March, Mr Monteyne estimated that the outbreak could collectively impact aggregate Tesco, Sainsbury and Morrison operating profits by a quarter (around £1.2bn, assuming three months of no operating profits under a worst-case scenario), with food retailers unwilling and unable to balance supply with rising demand by forcing price rises on customers.

But Mr Monteyne has first-hand experience in supermarket preparations for a flu pandemic. “The spreading of a pandemic was always considered a matter of when rather than if, and the industry has plans in place and has almost certainly started to activate those plans,” he writes. In his Tesco days, the company ‘war-gamed’ a pandemic every few years, simulating labour shortages, operational disruption and food riots. Operating costs rise as supermarkets are forced to hire more staff to plug gaps (Morrison has added 3,500 delivery jobs), but supermarkets will be aided by joint industry planning and will enact reductions in ranges as part of their contingency plans. Supermarkets are already taking simple steps to lower the risk of mass labour shortages. Marks and Spencer (MKS) staff have been given gloves in a bid to protect them from contracting Covid-19.

Covid-19 may also hasten a preference for online food delivery. Consumer demand for online groceries has slowed in the UK, according to Mintel, with the percentage of customers buying food online dropping from 48 per cent to 45 per cent between 2015 and 2018. Online shopping accounted for just 6 per cent of the total in 2019, according to grocery research and training specialist IGD. McKinsey analysis suggests that, with the exception of Tesco (which at 40 per cent has the biggest share of online orders) and Ocado (OCDO), the European online grocery market has been locked in a vicious cycle where weak supply has pushed down demand, and therefore justified poor supply levels.

Yet online delivery slots have become increasingly hard to source during the Covid-19 outbreak. Ocado, which has a partnership with Waitrose, has witnessed its shares make marked gains since the crisis began and is the only FTSE 100 stock in positive territory this year, but at the time of going to press, Ocado had made a decision to temporarily close access to its website to "allow us to complete essential work that will help to make sure distribution of products and delivery slots is as fair and accessible as possible for all our loyal customers". Amazon (US:AMZN), which has partnerships with Morrison and Whole Foods, is also coming under strain. These “business models that have always been good at something, and have always known how to perform in that way, [are] now trying to learn,” says BJSS retail analyst Georgina Wickman. In the US, Amazon is adding 100,000 jobs and raising hourly wages in response to the surge in demand. Morrison is expanding its online delivery capacity to more than 100 stores over the coming weeks.

Covid-19 might give the big, legacy players the opportunity to steal back market share from more streamlined discounters such as Lidl and Aldi, who also have more non-perishable goods compared with fresh items, Ms Wickman suggests. “People were laughing at the likes of Tesco for bulking up items, but actually it’s served them well in the long run,” she says.

There may also be ramifications for supermarket real estate. Online grocery shopping is forecast to grow, which is one of the reasons Supermarket Income Reit (SUPR), which lets stores to Tesco, Sainsbury’s, and Morrison, only invests in stores that dedicate part of their space to online fulfilment. The decision by shoppers fearful of Covid-19 to stay indoors could “accelerate a behavioural shift”, observed Tritax Big Box (BBOX) chief executive Colin Godfrey, which could increase demand for logistics space and drive up rents. But Tritax Big Box, which develops pre-let warehouses for tenants including Ocado and Amazon, expects decision-making to be tempered in the near term.

Supermarket stocks fell sharply in the middle of March, and while much of this will simply have been market contagion, coronavirus poses a legitimate threat to supply chains and stock replenishment. But the shares have marched back. Tesco, which is rowing back its international exposure, looks well-placed to cope with demand pressure, with its added flexibility through ownership of Booker, which was the country’s largest wholesaler before their 2018 merger. Morrison’s balance sheet strength, meanwhile, should allow the business to support investment in online outlets, staffing and operational change. As the calories shift from the restaurant tables and into the supermarkets, we think supermarket groups could deliver a sustained rally over the coming months.