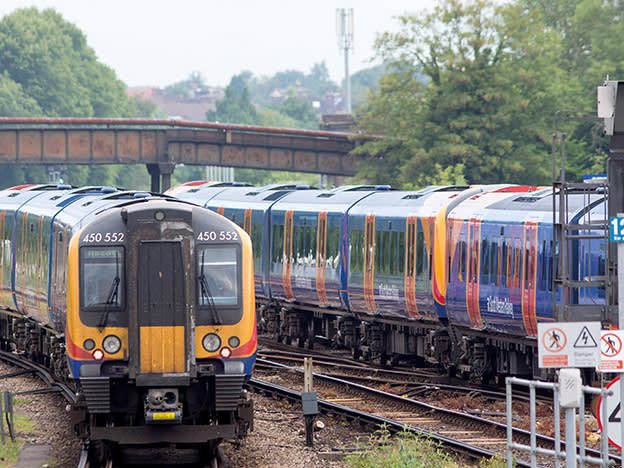 How will coronavirus change the rail industry?

The coronavirus outbreak has slashed passenger numbers across all forms of public transport. The government advised against all non-essential travel during the lockdown period and recommended working from home where possible. The public has heeded this guidance and this has been reflected most severely in national rail usage, where passenger numbers have fallen by around 95 per cent from pre-crisis levels.

Go-Ahead Group (GOG) and FirstGroup (FGP) are the two listed rail operators with the gravest exposure to a slump in passengers, while ticketing company Trainline (TRN) has also been hit hard. Go-Ahead operates the GTR and Southeastern franchises, which carry 30 per cent of the UK’s rail commuter journeys. Towards the end of May, these franchises were functioning at around 75 per cent of normal service levels, as allowed by the government. FirstGroup runs four UK rail franchises and also operates rail and trams in Hull and London respectively.

The UK government responded quickly as passenger numbers cratered towards the end of March. It suspended rail franchise agreements until at least 20 September and agreed to assume all revenue and cost risk posed to operators. Operators are being paid a fixed management fee instead, which has been set at a maximum of 2 per cent of the franchise’s cost base before the crisis began. Transport minister Grant Shapps told parliament that this model would “incentivise operators to meet reliability, punctuality and other targets”.

Short term volatility has gone away

The markets have responded pretty well to the government’s effective nationalisation of the rail system, with Go-Ahead and Trainline shares recovering much of their losses from the perilous days of March. Go-Ahead and FirstGroup can also count on revenue streams from elsewhere. They are active in bus transport, which has experienced a less severe decline in usage and has also received government backing.

The length and nature of the government’s rail support is up for speculation and will likely be decided by the eventual recovery of passenger numbers. The Department for Transport had already displayed a more interventionist approach to sub-standard rail management prior to the crisis, when it announced plans to nationalise the Northern Rail franchise in January and threatened to do the same with SWR – which is 70 per cent owned by FirstGroup. The government’s Williams Review into the structure of the railway industry is still pending.

For now, it seems impossible that rail companies will be able to profitably take back their franchises before passenger traffic returns to near pre-Covid-19 levels. Social distancing currently means that trains can only carry a maximum of one fifth of their capacities. A recent Transport Focus survey found that 71 per cent of respondents wouldn’t use public transport without social distancing in place, while 60 per cent said that once travel restrictions are relaxed, they will drive instead of using public transport. Most railways operate on a profit margin of around 2 per cent, leaving no room for this material collapse in passengers.

Trainline has, however, talked up its online offering as part of the solution to getting passengers back onto trains. “We expect Covid-19 to encourage a faster shift to digital ticketing as train users are less willing to use ticket machines or queue at the station,” the company said in its May results announcement. “Ongoing social distancing requirements will increase the need for clear and accurate, on-the-go travel information,” it added.

The absence of passengers doesn’t pose an immediate threat to companies, which are solely collecting fees for managing operations. But Nigel Harris, managing director of The Railway Consultancy, imagines a return to 80 per cent of normal traffic in six months. “More or less none of the franchises, maybe one of them, would be profitable at that level,” he says, “so you can’t go back to having franchises.” The East Coast Mainline franchise, operated by Network Rail, could be profitable under these conditions, he says.

It therefore seems unlikely that the government will withdraw its support and risk jeopardising the operation of our railway infrastructure. Alex Warner, chief executive at Flash Forward Consulting, thinks that this backing will probably have to be extended. He expects the Williams Review to yield a national strategic body to plan the future of the rail industry and the rollout of service contracts.

This lack of revenue risk would alleviate pressures on rail companies, including those linked to competing with other modes of transport. “That can lead to poor disciplines,” Mr Warner cautioned. “It can lead to ticket gates being left unopened, it can lead to perhaps less ingenuity around marketing,” he added.

Coronavirus has muddied the investment case for rail operators. While a nationalisation agenda isn’t on the table, in the meantime companies look restricted to running day-to-day operations in the UK with low and fixed maximum returns. Structural changes such as a shift to homeworking will doubtlessly put pressure on train companies, which have thrived for so long on packing commuters onto congested networks. It could be argued that the Williams Review is well-timed to coincide with this crisis as the government seeks to reshape the rail industry and improve outcomes for consumers. It will soon become clearer whether operators will be able to balance these improvements with value for shareholders.