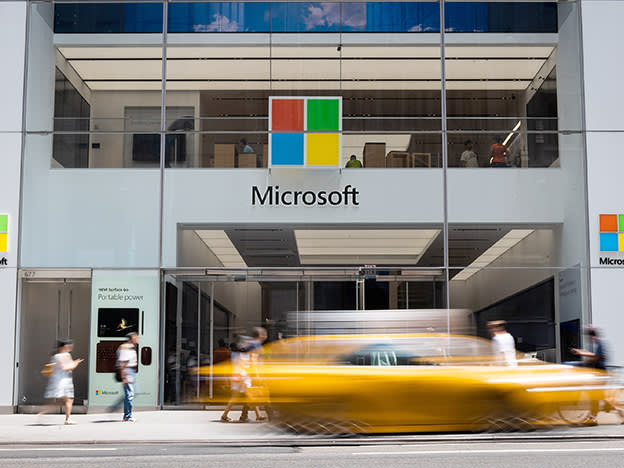 Lessons from history: What Google can learn from Microsoft

More than two decades ago, the US government accused Microsoft (US:MSFT) of being a monopoly. The Department of Justice said the software company was using its Windows monopoly to squeeze out Netscape, a browser that was competing with Internet Explorer. After avoiding the threat of a break-up, Microsoft and the government reached a settlement in 2001, although the company was forced to abide by a consent decree until 2011. The court did not establish that Microsoft’s bundling of Internet Explorer with Windows was illegal – but it did tighten the conditions that Microsoft could impose on the PC makers who distributed its operating system.

This relatively recent precedent meant that Microsoft's chief executive, Satya Nadella, managed to escape regulatory scrutiny in Sillicon Valley this year. But Facebook (US:FB), Amazon (US:AMZN), Apple (US:AAPL) and Google parent Alphabet (US:GOOGL) did not have the same luck. Indeed, a 16-month investigation into anticompetitive practises in Big Tech companies culminated in a report that called for the break-up of the behemoths. And just weeks later, the Department of Justice filed another antitrust lawsuit – this time against Google.

The irony of the fact that these companies were one of the biggest beneficiaries of the Microsoft case back in the late 1990s is probably not lost on regulators on Capitol Hill. When Microsoft was forced to give up some of its market share in internet browsing, for example, it meant that Google could compete more openly with Microsoft's search engine, Bing. Facebook would later enter a market that was not completely dominated by MySpace. Indeed, the timing of US regulators would suggest that they operate on a 20- to 30-year cycle, at least in the world of tech. Microsoft had initially been a beneficiary of a similar lawsuit brought against the old guard of the IT sector, IBM (US:IBM), in the early 1980s.

But since the IBM or Microsoft cases, the Department of Justice has had time to fine-tune its approach. This time, it is cutting straight to the chase: its complaint specifically targets the way that Google uses its distribution, especially on mobile devices, to boost its alleged monopolies in both search and search advertising. These claims will be difficult for Google to refute: it controls almost 1990 per cent of the search engine market, according to research firm Statista. That is a similar proportion of control that Microsoft had over the operating system market back in 1998.

Google says that the lawsuit’s "dubious antitrust arguments" will harm consumers in the long run, which is also the same defence that Microsoft offered 20 years ago. The $120bn of cash and marketable securities on the balance sheet of its parent company means that it has more than enough firepower to fight the Department of Justice in court. And it will likely not affect the company’s market value – indeed, over the course of Microsoft’s antitrust case, its shares still climbed more than a fifth.  But that does not mean it was without a cost; Microsoft’s reputation did not emerge completely unscathed. It is doubtful that Alphabet will have much better luck, especially as its dominance in its markets becomes more conspicuous the more its technology pervades consumer life, not just in search, but in services such as YouTube, and devices such as smartphones and speakers.

Google already has an image as the champion of the age of information, and has pioneered great technologies. Just last week, one of its subsidiaries, DeepMind, had a major scientific breakthrough, developing technologies that can predict how proteins will fold, which can help diagnose and treat human diseases. But that will not be enough to protect Google from the scrutiny of regulators, or even from a change in the tide of public opinion. For many, the Big Tech groups are not viewed as the heroes anymore, especially as anxiety over the commodification of personal data grows. Even Microsoft has not been able to avoid antitrust scrutiny in the Europoean Union, where Slack (US:WORK) has filed an antitrust complaint against the giant.

If this lawsuit takes as long as the 10-year case against Microsoft, Google has time on its side. Even in the worst-case scenario, a break-up would not necessarily spell disaster for shareholders. While it makes more than four-fifths of its total sales from advertising, it has over 70 subsidiaries – many of which are young and fast-growing businesses. A decade could give these companies, whose goal is to thrive in "the medium to long term", enough time to plant a strong foothold in their respective markets.

Or Google could learn from what happened to Microsoft. Instead of flat-out denying the existence of its market dominance and fighting a long, bitter battle in court, it should cooperate with the government. If the company, as it maintains, does have the best product on the market, it should not need to pay Apple an alleged $12bn to make it the default search engine on its devices. Two decades ago, Microsoft was forced to make some concessions – and Google is far too big to not expect to meet the same fate.

Microsoft remains one of the world's most successful companies – that is a lesson Alphabet's management can certainly learn from.