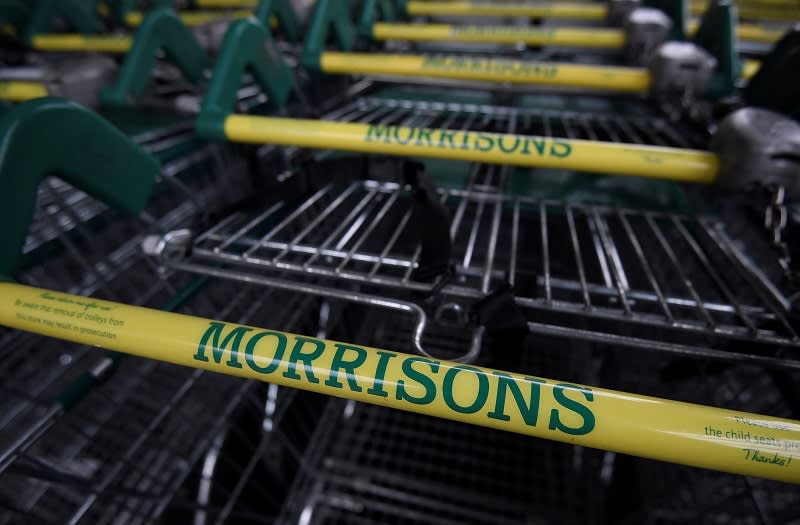 One last hurrah for UK supermarkets?

Morrisons is embroiled in a potential three way private equity fight for ownership, but are there any possible targets left in the UK's ultra competitive grocery sector

WM Morrison (MRW) is in the midst of a multi-way tussle for control. An initial bid of 230p from US private equity (PE) house Clayton, Dubilier & Rice (CD&R) was rejected in late June, but days later the board accepted a bid of 254p by another PE house, Fortress. A third PE investor, Apollo, had expressed interest but chose to step aside and Candian PE player Couche-Tard (foiled in a €16bn bid for Carrefour in January) could also be interested. Meanwhile, the share price sits above the Fortress offer indicating that investors don’t think the race is run.

This is the second PE bid for a UK supermarket this year with Asda acquired from Walmart in February in a classic leveraged buyout with scant equity and lots of debt used for the purchase. Leveraged buyouts often lead to aggressive cost-cutting and stripping of assets with the PE investor looking to make a quick gain before flipping the asset on, often back onto the public market. This is how the CD&R bid looked, but the Fortress offer feels a little different. This is because a significant part of the consortium is a Canadian pension fund and this class of investor is more inclined to play a long game, looking to optimise a business rather than raid it. There have been assurances on protections for staff and the supply chain, which look to have been instrumental in securing the board’s recommendation. That said, it is hard to imagine that Morrisons' extensive freehold estate (it owns 85 per cent of its stores) will not be monetised to some extent.

But Morrisons is largely water under the bridge now with just the final ‘who’ and ‘how much’ to be settled, so speculating on how value might be wrung out is of waning interest to investors. It is more useful to consider the supermarket sector more widely, examining the issues faced and whether there are other potential targets.

Why the sudden interest in UK supermarkets?

The sector’s share prices and ratings show weak long-term performance and, prior to the bids, Morrisons had effectively  made a zero total return for shareholders over 10 years: the All-Share index made a total return of >90 per cent. But this depressed long-term performance, low rating, high cash flows, expensive dividends, fundamentally defensive market demand and sub-optimal online trading has set pulses racing in the world of Private Equity. UK supermarkets look like great potential fixer-uppers.

Why has performance been this poor when demand for food is very stable and online ordering/home delivery is immature and lags wider online retail but is now growing rapidly? Two key problems for the UK food retailers we see are: an inability to convince investors that they can make good money selling food online for home delivery and persistent new competitive pressures. The sector's potential new private equity owners will face these issues too.

Why is it hard to make selling food online profitable? While the supermarkets claim that home delivery is profitable, they keep the financial details opaque and investors are concerned that this fast-growing portion of sales becomes a drag on profitability. The nature of online food retailing is very different from other online purchases. Most e-commerce involves a single pick (often automated) and uses couriered/postal delivery. By contrast, food involves a typically long, manual process and delivery by the retailer’s own fleet.

Other online items cost pennies to pick and the delivery charge is at least cost-neutral. For food, the pick and pack might take 40 minutes (c£13 per hour of total employment costs) plus delivery cost we might reckon at another £6. The consumer pays only £5 for the service, so the cost problem is clear. Supermarkets’ base Ebitda margins (shopper, in-store) are around 6.5 per cent, so for an average online basket size of £80-£90, the profit is only around £5 meaning that money looks to be lost on each order. Losses are likely to be smaller if picking is from a warehouse, possibly just about profitable from a fully automated fulfillment centre (such as Ocado (OCDO)) but notably Tesco (TSCO) and Sainbury’s (SBRY) still largely use store picking.

This is a pressing issue because growth in online delivery accelerated due to the pandemic, rising from c7 per cent of industry sales to nearer 13 per cent in just a few weeks in Q2 2020, and now testing 15 per cent. The industry does not expect this to reverse significantly as restrictions ease. Based on the figures in our table, that shift in buyer profile could shave close to 100 basis points from overall margins.

Morrisons looks better-positioned than its peers. It has a joint venture with Ocado to fill Morrison-branded vans within an economic radius of an Ocado warehouse, but still picks from store otherwise. Tesco does have a ‘dark store’ strategy - specialist hybrid store/warehouse locations, where half the floorspace is dedicated to home delivery picking, space readily created by repurposing oversized Tesco ‘Extra’ locations, but this is still embryonic. Margins likely fall somwhere between store-pick and warehouse levels, so better but still not great. Ocado is pure automated pick and drop but struggles to show a profit even after 20 years. Clearly this is an area that supermarkets need to address but rapid change still feels unlikely and this cannot be solved without substantial capital investment and/or significant operational repositioning.

A major question for supermarkets is what are Amazon’s ambitions? A proven disruptor and well able to absorb even large initial losses, Amazon is clearly interested in food. Despite slow initial progress since entering the UK food market in 2016, it has significantly upped momentum in the past year. It has grown Wholefoods in the US and recently hired former Tesco chief operating officer Tony Hoggett to head up its UK physical store expansion: today, there are just three stores, all in London. Amazon has around 3 per cent (source: Mintel) of the UK online food market (modest but equal in scale to Waitrose) via its ‘Amazon Fresh’ delivery service, despite offering only a limited range and delivering to a scattergun of postcodes in south-east England. Amazon has c30 per cent of total UK e-commerce spend and can be expected to push well beyond its current position in food if and when it decides.

There are good grounds for supermarkets to be concerned both from Amazon’s proven capabilities and ambition but also the sector’s own history of failing to shut out new competition. When the discount retailers – Lidl, Aldi and Netto (then bought by Asda) – arrived in the UK, little was done to prevent them rapidly building a substantial presence. Lidl and Aldi together now hold c14 per cent market share, almost entirely store-based. Amazon’s focus is likely to be primarily online and there is little that existing supermarkets can do to push back other than fight on price, possibly having to resort to price differentiation between store and online: that is an outcome no-one wants. This would risk orienting even more sales online increasing the pressure to make selling food online pay. A better outcome might be to replicate Morrison's co-operative approach with Amazon.

Amazon is already a master of automated distribution, already has wholesale and ‘last mile’ infrastructure plus a large established customer base. Some 90 per cent of UK shoppers do or have previously used Amazon and there are over 15m Prime subscribers who are likely to be the main focus for winning market share in the UK food sector. Prime customers already qualify for free food delivery.

Amazon doesn’t need an established brand to disrupt this market so speculating that Amazon might be a buyer of Morrisons feels wide of the mark. Nonetheless, Morrisons' JV with Amazon for the wholesale supply into Amazon Fresh and its own presence with ‘Morrisons on Amazon’ has raised questions about whether Amazon could counterbid for Morrisons. It feels more likely that Amazon is just learning more about the game and will expand its own supply channels rather than buy an incumbent. Does Amazon want to be involved with such a large physical retail footprint, an unwanted additional distribution infrastructure and a large food manufacturing business? That feels unlikely.

Are the remaining supermarkets bid targets?

After Morrisons, there is little left for PE investors viably to rake over as it and Asda were the low-hanging fruit. We can assume that interest in this sector remains high given the potential three-way fight for Morrisons, the same number interested in Asda in February (Apollo and Lonestar were outbid) and the raft of PE acquisitions in other sectors. What is the likelihood of other bids arising for supermarkets? We think it is now more limited, with perhaps just one exception: Sainsbury’s.

Sainsburys. This is an oft-named possibility largely due to its share register: 25 per cent of the equity sits with just two holders. 15 per cent is held by the Qatari sovereign wealth fund, who recently sold down from 25 per cent with hedge fund Vesa picking up the 10 per cent. The lossmaking banking operations could be a deterrent, but Argos is thriving – this shows what estate rationalisation can achieve. Debt has fallen sharply (down 70 per cent since 2016), highlighting the strong cash flow, which leaves the business arguably under-geared, the like-for-like sales figures are strong (+8.2 per cent in the quarter to 27 June) and there is a £750m pension fund surplus, uncommon for such a long-established company. The shares have risen by 12 per cent since the first Morrisons offer, showing that markets believe that the odds of a bid are short.

Tesco. Holding around 29 per cent of the UK food market, this feels too large for PE but not impossible. At £18bn before any bid premium, this would be one of the largest PE deals ever made (the record is $32bn). Notably, the share price has barely changed since the Morrisons bid suggesting that the market does not expect any move.

Co-op Food. Holding c7 per cent market share (but little online) the ownership structure with the Co-operative network would be likely to make a bid problematic.

Waitrose. Holding 5 per cent market share, this business makes double the Ebitda of John Lewis (£1bn vs £550m), which would make a separation difficult. That, coupled with the ownership structure, would again make any offer problematic.

M&S Food. Market share is around 4 per cent but unlike its peers sales fell back in 2020 in large part because of the lack of a decent online presence. Separating food from clothing et al would leave a business unlikely to appeal to investors so again, a successful bid just for food feels unlikely.

Aldi & Lidl. These businesses could be separated from their German parents but that feels unlikely. Lacking online presence, still heavily focused on physical store openings and already having low-cost, lean operations, attractions for PE seem limited.

Overall, we could see one further roll of the dice in this sector and as that might be the last viable option in the sector, there is scope for a battle royal for Sainsbury's. However, with the shares still trading on a materially sub-market rating and with fund managers likely to be unhappy being left with just one quoted supermarket, any bidder might have to dig deep.