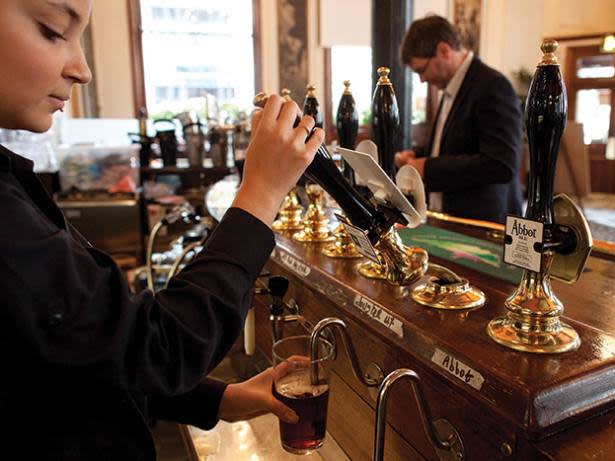 JD Wetherspoon: cheap pints but is it a cheap stock?

JD Wetherspoon (JDW) is something of a British institution, albeit a quirky one. It has been described as the ‘cockroach of the high street’, not because it shocks and offends, but because it is a survivor. The last two years have been extremely tough for the hospitality industry but is JDW’s low-cost, high-volume model set to make the business thrive once Covid recedes or does the business face pressures that make rebuilding returns difficult? Also does JDW have a business model that, necessarily, has to put sales volume preservation ahead of shareholder returns and what does all this mean for shareholders?

JDW has, for a UK pub chain, an unusual operating model. Operating something like a low-cost airline it runs on low margins using a low pricing strategy to drive high volumes and throughput. Like a low-cost airline this means its pubs need to achieve, in airline parlance, a high ‘load factor’ in order to break even. When all is right with the world, that model worked, and very well, but was always vulnerable to anything that might cause the ‘load factor’ to drop. Covid has done just that and in more ways than the obvious lockdowns and closures keeping customers away.

One of JDW’s main focuses has been on city centre locations rather than competing only with local pub operators, which is all too often a war of attrition. This has meant higher rents (JDW only owns two thirds of its estate) and other operating costs but more pertinently fewer customers have returned even after lockdowns or restrictions have ended: more people work from home, fewer commute to central locations. The danger is that this could become a permanent and structural change in the UK’s working patterns leaving a large part of the group’s estate as a long-term underperformer.

Customers are returning to the group’s ‘local’ pubs, especially outside central London and market share is growing as Covid has reignited the long-term decline in the UK’s pub numbers. UK pub numbers have been in steady decline, dropping from 61,000 outlets in 2000 to 47,000 by 2019. JDW has played no small part in driving weaker operators out of the market and taking some of their market share. But there are stiffening headwinds, primarily due to rising inflation.

The typical response to rising costs is to push up prices, as recently reported by Next (NXT) and Greggs (GRG). For JDW this is harder to achieve as its customers are reckoned to be extremely price sensitive and price rises sufficient to offset higher costs could easily trigger a far greater decline in volumes: bad news for a business that is all about volume. To preserve the business model, it feels inevitable that margins will have to be sacrificed: this is nothing new.

Trading patterns for JDW over the last decade have generally been to see sales volumes and revenues fairly stable, rising well on a per-pub basis while margins have been in shallow decline. Sales grew around 4.5 per cent on a compound annual growth rate (CAGR) basis from 2012 to 2019 in an industry that generally tracks GDP growth, underscoring that this is a strong player, all the more impressive given a 10 per cent cut in outlet numbers since 2015. But margins have been sacrificed in order to hold pricing, protect sales volumes and keep the model intact.

Margin pressure has come from various directions, but mainly people costs. Matching the living wage has seen staff costs rise more rapidly and pension auto-enrollment has added to staff cost pressures while more broadly lower revenue from high margin gaming machines has dropped (regulation changes), food (lower margin than bar sales) has increased (now 37 per cent of sales versus 30 per cent a decade ago) and input costs of goods sold have not fully been fully passed through. The latter again aiming to preserve sales volumes.

JDW is essentially a living wage payer and this will rise by 4.4 per cent in April along with the 1.25 per cent increase in employers NI: with wages equal to 35 per cent of costs, the impact will be marked. Coupled with widespread shortages of staff in the hospitality industry, the total wage bill could increase even further. In table 1, we assess potential staff cost rises and illustrate the impact this could have on margins.

A mixed trading climate ahead

Consensus forecasts for JDW (which we assume are based on the resumption of a full 52 weeks’ trading) indicate that analysts expect a return to 2019 levels of business in the year to July 2023 and to then resume sales growth of 5 per cent. This feels optimistic.

First, it feels bullish to assume that business volumes return to pre-covid levels at, essentially, the first opportunity. There is likely to be more caution, especially amongst JDW’s older customers, and it feels reasonable to expect ongoing, sporadic Covid surges driving isolations or unwillingness to visit very busy environments. That said, JDW is likely to gain market share but its city centre locations will act as a drag.

Second, the personal financial squeeze coming in the next 12-18 months is likely to hit the most discretionary spending hardest: going out is often an early casualty. While pub spending did look good in summer 2021, much of this will have been the novelty of again being able to have a night out plus the boost from the VAT cut on hospitality. JDW’s customers generally sit at the lower end of the income spectrum: students, under 25s and retirees: those most sensitive to income pressure and, more cautious analysts surmise, the most price sensitive. This again highlights the need to avoid passing through cost inflation.

Third, there is some evidence that, running into 2022, people are visiting pubs and restaurants less but spending more on the visits they do make. This flows through as customers 'trade up’ to slightly higher end establishments, for example at a Restaurant Group brand rather than in Wetherspoons, which could dent demand. Evidence of this is still hazy but has been seen elsewhere in retailing.

Fourth, we outline above higher employment costs but ongoing staff shortages across all areas of hospitality could drive staff costs higher than we have modelled. That said, JDW offers above average baseline salaries and a generous profit share and bonus system which could help promote greater staff loyalty.

Fifth, carrying higher debt into a rising interest rate climate could further dent margins, although JDW does have some favourable interest rate swaps in place.

As an offset, JDW does have some advantages. First, as consumer spending power drops, there is a good chance of migration away from ‘traditional’ pubs to JDW’s low-cost alternative. Second, and springing on from the first point, more pubs are likely to close creating additional business opportunities for the survivors. Third, JDW is a powerful buyer in the supply chain and may be able to claw back some of its higher input costs.

Things are looking a little brighter for the hospitality trade running into 2022. Since mid-December JDW has seen something of a bounce in its share price, rallying from 811p to 975p, a pick up of 20 per cent. This ‘relief rally’ arose as Boris Johnson resolved ever more strongly that there were no plans for another lockdown despite still very high new case numbers due to Omicron. This serves to highlight firstly how sensitive this stock is to lockdown risks and secondly how confident the market is that JDW’s business levels can recover quickly.

However, there are two camps within brokers’ analysts on how well and how quickly things will play out for JDW. Some appear to be prepared to ‘look through’ Covid as a one-off (albeit very long) disruption after which life will return fully to how things were before 2020. This feels optimistic and there are signs there will be lasting, structural change for the industry wrought by Covid even before considering JDW’s own cost pressures.

Other analysts follow a more cautious line believing that without a change of model or new investment (which is hampered by the high levels of debt) trading will struggle to reach FY2019 levels even by FY2024. As a result the main metric for valuation (FY2023 Ebitda) sits in an unusually wide range: £174m (admittedly something of an outlier) through to £274m: the consensus sits at £252m. But that assumes a fully restored market climate for pubs and recent chatter indicates that the government still sees perhaps six more years of Covid disruption to some extent or another.

Greg Johnson at Shore Capital (originator of the ‘cockroach’ analogy) believes that consensus figure is about right but that it will come in FY2024 rather than FY2023. While there should be decent progress on sales (perhaps greater than 5 per cent like-for-like growth) it will be difficult to overcome the drag from higher costs plus there are many potential hazards, as outlined above.

Could JDW improve its appeal by raising the dividend? The yield is little more than 1 per cent. That feels unlikely as the dividend has not been increased from 12p since 2010, which may be influenced by the chairman’s personal stake, which is still around 22 per cent. JDW has executed some material share buy backs that have allowed c.4 per cent compound PBT growth to translate into almost 8 per cent EPS growth compound. But it is going to be hard for JDW to make further buybacks given the high level of debt, which may be as high as 4x underlying, recovered Ebitda, a level the board would like to see closer to 2x.

This means that, at 975p, the FY2023 rating is around 9x EV/Ebitda on Shore Capital’s more cautious numbers, about as high as it has traded in the past 10 years. It is a business facing stiff headwinds, margin pressure and high debt which make it hard to justify the valuation pushing much, if at all, above the current levels. A very solid business to be sure, but no there’s rush to buy the stock even standing almost 45 per cent below its pre-covid high.