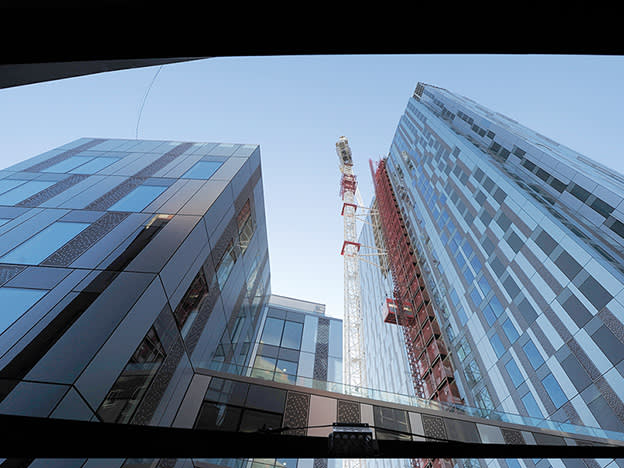 The student landlord has suffered a fall in rental income post-pandemic, but an anticipated rise in university applications and the enhanced scale of its portfolio could result in a sharp recovery

The ongoing suspension of face-to-face university teaching and government orders for most students to stay in situ have cast fresh uncertainty over the prospects for student accommodation providers. Earlier this month, sector-leader Unite (UTG) announced that it would be giving students 50 per cent off rent for four weeks and a complimentary four-week extension of their lease, to compensate for the fact that many had delayed their return to their accommodation following the Christmas break.

Yet the occupancy rate for the aforementioned student landlord has held up better than peers for the current academic year and a sharp recovery in rental income is forecast for this financial year. Whether that recovery unfolds as forecast hinges on whether the government’s vaccine roll-out is achieved on time and more widespread return of teaching on campus. However, a rise in university applications this year and an under-supply of student beds could provide grounds for further growth in demand for student accommodation.

Is the worst behind Unite?

Unite is the largest UK-listed provider of purpose-built student accommodation and has a portfolio of over 75,000 beds located in major university cities across England, Wales and Scotland. Unsurprisingly, income during 2020 took a hit from the refund of summer term rent for the 2019/20 academic year and a lower rate of students moving in to start the current academic year in the autumn.

Unite is due to report final 2020 results on 23 February, which based upon consensus broker forecasts will reveal a 39 per cent reduction in earnings per share (EPS) versus 2019. Refunding rent for the 2019/20 summer term to students that had chosen to return home cost £26.9m. What’s more, a reduction in occupancy has led management to guide towards an annual reduction in rental income for the 2020/21 academic year of up to 20 per cent. Due to the timing of rental payments, the impact of that anticipated reduction in income will be spread over both the 2020 and 2021 financial years.

The measures the landlord announced earlier this month of the 50 per cent rent discount and tenancy extension are expected to cost around £8m during the 2021 financial year. There is the risk that the discount period could be extended if the spread of the virus worsens and students are unable to return to campus from mid-February, a timetable provisionally set by the government.

Yet despite that uncertainty, analysts are forecasting a recovery in earnings from this year, as the occupancy rate improves. Consensus expectations are for EPS of 34.1p, a rise of 44 per cent on 2020, with earnings surpassing the pre-Covid, 2019 level by 2022 at 44.2p. A more positive outlook for earnings is expected to coincide with the return of dividend payments, after the final dividend for 2019 and the half-year payment for 2020 were scrapped. Analysts are forecasting a dividend of 12.6p in respect of 2020, rising to 27.5p for 2021.

In November, 88 per cent of beds had been let for the current academic year – down on 98 per cent the same time the prior year – and by January, checked-in occupancy stood at 80 per cent. Rental arrears for the first term are broadly in line with previous years. The lettings rate was above pure-play student landlord peers Empiric Student Property (ESP) and GCP Student Living (DIGS), which have reported rates of 70  per cent and 69 per cent, respectively.

There are several factors that could be behind Unite’s superior lettings rate in the face of the pandemic. UK students accounted for 65 per cent of bookings for 2020/21. That is higher than the latest reported proportion of rooms let to domestic students by both Empiric and GCP, which stand at 39 per cent and 27 per cent, respectively.

Look to the longer term

There are indications that university application numbers are holding up well post-pandemic, which could spur further demand for student accommodation during the next academic year. At the October deadline for 2021/22, a decline in applicants from the EU was offset by an increase in international applicants outside the trading bloc and those from the UK, according to UCAS. That resulted in a 12 per cent increase in overall applications compared with the same time in 2019.

That followed a 3 per cent increase in applications for 2020 to almost 729,000. UCAS forecasts that there will be an additional 90,000 applicants to UK universities by 2025, in line with Office for National Statistics forecasts of a rise in the 18-year-old population.

In addition to agreeing more nomination agreements to grow its tenant numbers, Unite is hoping to take market share from Houses of Multiple Occupancy (HMOs), setting rent at a small premium – an average 8 per cent or £10 a week – which it hopes to justify by offering higher-quality accommodation and services including high-speed WiFi and onsite security.

Following the acquisition of Liberty Living, it had grown the number of beds in its portfolio by over 50 per cent since 2016. During each of those years the occupancy rate stood at around 98 per cent.

The group has a current secured development pipeline of 5,370 beds to deliver by 2024 at a cost of £693m, 54 per cent of which are due to be let under university partnership agreements. In June, £300m was raised via a share placing at 870p to fund the acquisition of three further development sites that were either exchanged or under offer.

The placing also helped bring down the group’s loan-to-value ratio to 33 per cent. Indeed, the balance sheet looks in good shape: it has £541m in unrestricted cash, against an average monthly cash consumption of between £11m and £13m and no debt maturities before November 2022. It also has the ability to withstand a reduction in occupancy to around 55 per cent for the 2020/21 academic year to breach its tightest interest cover covenants.

At a multiple of just under 1.1 versus forecast book value at the end of 2021, Unite’s shares trade at a premium to Empiric and GCP, but that valuation partially reflects the much larger scale of its portfolio, which dwarfs both of these peers. The shares' valuation also compares with a forecast book value multiple of 1.4 this time last year, when the shares were riding hiding on the group’s drastically increased scale and solid occupancy.

Bookings for the 2021/22 academic year stand at 57 per cent, behind a rate of 64 per cent at the same point the prior year. There is undoubted near-term uncertainty over the pace at which students return to their accommodation and occupancy rates recover, but anticipated demographic changes and post-pandemic university application data give grounds for a restoration in rental growth for Unite over the medium term.