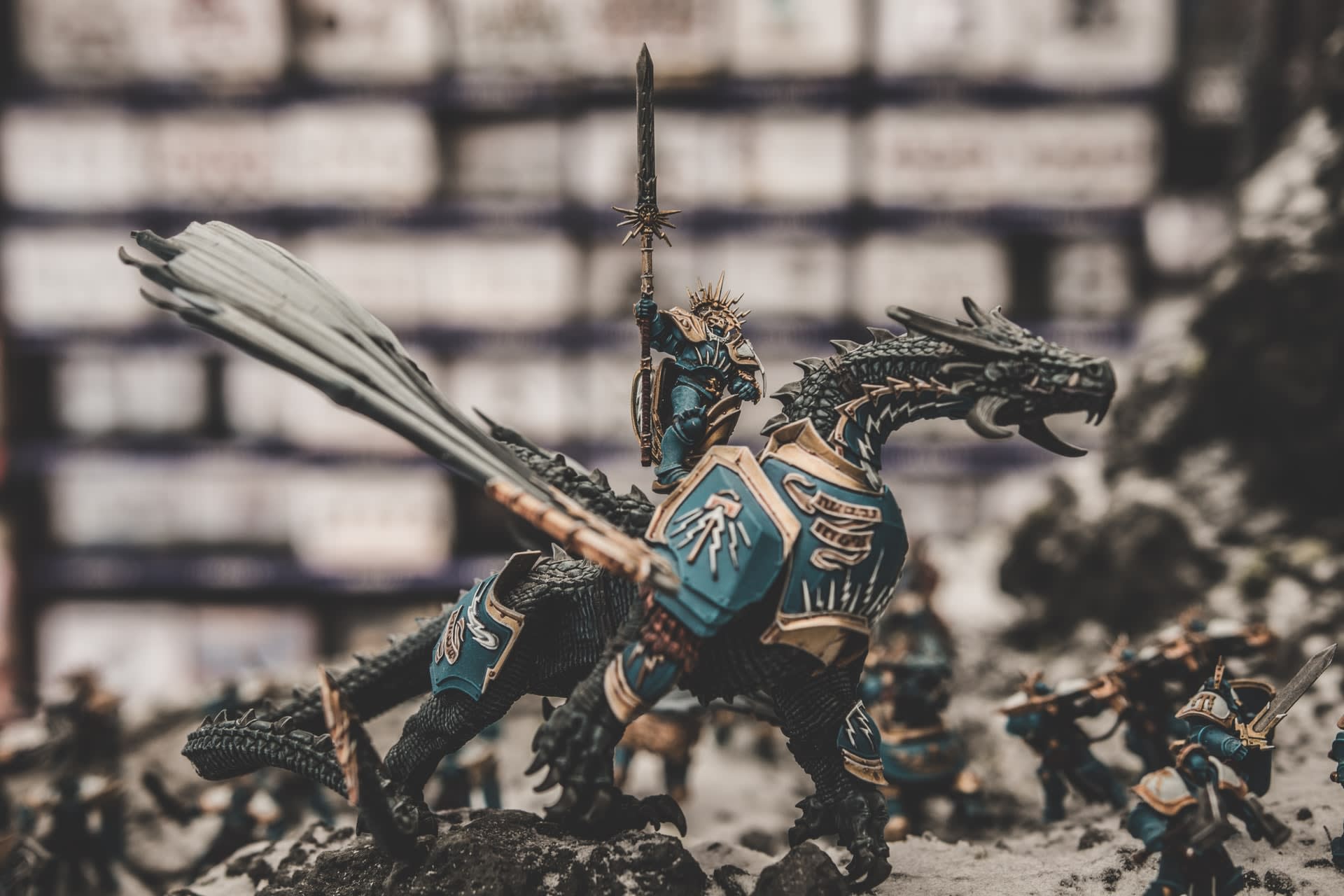 The miniature wargames maker’s shares have lost ground since the start of the year, making for an attractive entry point

Games Workshop (GAW) designs, manufactures and distributes miniature figurines that are used to simulate battles in tabletop games. Feeding into an ecosystem of related products, including paints, novels and video games, its products are sold via three channels: its own website, 529 retail stores and 5,100 third-party trade outlets.

Best known for its Warhammer mythologies, Games Workshop commands a level of affection from its customers that few other brands enjoy. This loyal army of hobbyists has enabled it to establish a leading position in a niche market that would take many years, a lot of imagination and considerable resources to replicate. While its legions of fans are often branded ‘nerds’, they represent a lucrative customer base that include the likes of Superman actor Henry Cavill, who says he “genuinely can't get enough of the lore they have built over the decades”.

This loyal fanbase is partly why Games Workshop is a popular pick among funds. For example, it is the top holding of the CFP SDL UK Buffetology Fund (GB00BF0LDZ31). Eric Burns, chief analyst at the fund's management company Sanford DeLand, points to the company’s “cult-like status. Its customers eat, sleep and breathe its products, not just in the UK, but the world over”.

Games Workshop made its market debut back in 1994, but the shares really came to life in 2016 following the arrival of Kevin Rountree as chief executive. Under Rountree’s leadership, the original Warhammer franchise was refreshed and relaunched as Warhammer Age of Sigmar, a broader range of price points was introduced, and the company set up warhammer-community.com to improve digital engagement with its customers. This website has 4.7m users.

Reflecting the impact of this transformation, the shares have risen from around 500p to over 9,000p now – not bad for a business that started out life selling wooden boardgames from its founders’ homes in 1975.

A vertically integrated business model – meaning that it manufactures and distributes its own products – does make for a high fixed cost base. But once these fixed costs are covered, Games Workshop’s profits grow at a much faster rate than sales – a relationship known as ‘operational gearing’. It’s worth noting that this is a risk during a downturn when consumers cut back on spending. But during the good times, operational gearing means that the company enjoys high margins – it recorded a gross margin of 75 per cent in the six months to 29 November, with an operating profit margin (excluding royalties) of 45 per cent.

Margins should be further bolstered by the introduction of new products, as Games Workshop has learned to keep its long-term customers happy by typically only increasing prices on new merchandise. In 2020, 38 per cent of sales were from new releases versus 62 per cent from existing products.

A ‘fortress wall’ of intellectual property

With more than 40 years’ experience in building fictional worlds, Games Workshop has established a wealth of proprietary content which it has dubbed its "fortress wall” of intellectual property (IP). But unlike media giant Disney (US:DIS), the company has been slow to unlock the value from this IP by licensing its content to third-parties such as video games developers. That has been changing in recent years, with royalty revenue rising from just £1.5m in 2015 to £16.8m in 2020.

“[Its] fast-growing royalty income is where four decades spent constructing rich fictional worlds could help make this a very valuable business indeed,” says Milena Mileva, manager of the Baillie Gifford UK Growth Fund (GB0007913485), which includes the company as one of its top 10 holdings.

Royalties can be lumpy as they depend on the timing of third-parties’ projects and games releases. But Burns says that “royalty income is the best form of income as there is no cost of sale associated with it”. Indeed, royalties are almost pure profit – the £8.7m of royalty revenue generated in the six months to 29 November translated to £8.2m of operating profit on a 94 per cent margin.

Royalties are a relatively small part of the overall earnings picture right now – they equated to just 9 per cent of total operating profit in the first half of Games Workshop’s 2021 financial year – but further momentum should come as the company actively looks to monetise its extensive IP catalogue. To this end, it is expanding its licensing team across North America, China and Japan.

Games Workshop signed a deal with Frontier Developments (FDEV) last May, through which the video games developer will publish a real-time strategy game based on Warhammer Age of Sigmar in 2023. While the company’s tabletop games have more than held their own amid the exploding popularity of the likes of Fortnite, these types of partnerships will ensure that it extends its reach beyond just the growing board games market to capture a slice of the video games market as well. At present, Games Workshop’s royalties are weighted towards PC games, but it is expanding into the mobile market having launched its first mobile game in China last year.

The company is also pushing into digital entertainment, where the popularity of programmes such as HBO’s Game of Thrones and Netflix’s (US:NFLX) The Witcher demonstrate how the fantasy genre has become mainstream. Games Workshop is developing a live-action television series based on its Eisenhorn novels and is on the hunt for a broadcasting partner. A deal with a major streaming platform such as Netflix could supercharge its royalties profile.

Hammering through the pandemic

Games Workshop has seen demand for its products swell during the pandemic as people look for something to do during lockdown. Sales for the six months to 29 November increased by over a quarter year on year to £187m. The revenue growth was led by the trade segment – where sales climbed by a third to £104m as it added a net 200 accounts – and an almost 90 per cent jump in online sales to £46m. Momentum in these two channels more than offset the impact of temporary retail store closures.

Games Workshop has traditionally recruited the majority of new customers through its stores, where people can learn how to play Warhammer and meet with like-minded hobbyists. The company says that if current trends continue, around 50 of its 529 stores will not break even for the full year. Still, as Covid-19 vaccines are deployed, its retail estate should eventually bounce back, benefitting from pent-up demand for socialisation.

The first half saw its overall pre-tax profit rise by 56 per cent to £92m, in line with its upgraded expectations of “not less than £90m”. The company has a habit of both lifting and exceeding its guidance, triggering analysts to bump up their forecasts. Brokers have been turning increasingly bullish on Games Workshop’s prospects over the past year (see chart).

Such is the level of demand right now, the company’s ‘out of stock’ levels are currently running higher than usual and during December its US distribution facility was, at times, “stretched to its limits”. In the long term, such constraints should ease as its new UK factory comes online and a planned expansion of US warehousing capacity is completed.

Excluding lease liabilities, the group was sitting on £97m of net cash at the end of November, up from £53m at the May year-end. The balance sheet should remain in good trim and the company hasn’t held any long- or short-term borrowings since 2009 and doesn’t spend on acquisitions. Meanwhile, despite a conservative dividend policy that only returns “truly surplus cash” to shareholders, the cut last year was the first time that the payout has dropped since 2014. Analysts are expecting it to rise again this year (see table).

Over the past year, it has been difficult to find an attractive entry point for Games Workshop as the shares continued to gather momentum after the ‘corona crunch’. But they have lost ground since the start of the year – falling by around a fifth – which perhaps reflects some profit-taking and investors’ reorientation towards potential pandemic recovery plays. This sell-off – which seems to be overdone in our view – has left Games Workshop trading at just 24 times consensus 2022 earnings. That’s considerably cheaper than it has been in recent times and close to its five-year average price/earnings ratio of 19.

It therefore suggests a buying opportunity as Games Workshop still has plenty of room left to grow, particularly as it continues to expand its mythology and release new products. Despite around three-quarters of its sales coming from overseas, the company still considers the rest of the world “green field territory” and Mileva says that “North America, Germany, and, in the longer term, Asia loom large as growth markets”. Adding to this long-term potential is the prospect of unlocking more meaningful royalties from its treasure trove of IP. While its sales may rely on fantasy, Games Workshop is offering very real returns for investors.