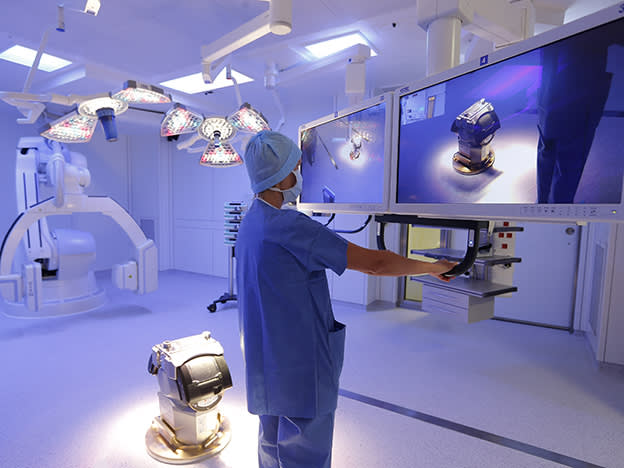 Intuitive Surgical: a cut above?

A red and white pole can still be spotted outside many traditional barbers’ doors, reflecting the hybrid role of their shops in medieval times. On top of the usual trims and shaves, barbers also performed surgery on sick and injured customers. They were, after all, already proficient with sharp blades.

Medical procedures have thankfully come a long way since then. Knowledge and experience have advanced significantly. Doctors train for years in their areas of specialism. They also work in sanitised hospitals rather than grubby salons.

Yet challenges remain. While surgery on its own can be a daunting prospect for patients, open surgery only adds to that burden – entailing larger incisions, the need for extended bedrest and potentially a greater risk of complications.

At the same time, governments with pressurised budgets demand lower patient costs to treat disease, as they strain to provide necessary healthcare resources to their citizens.

Technology has played an increasingly important part in medical progress over the years, just as it has for many other sectors. And one of the leaders in the ‘medtech’ arena is Intuitive Surgical (US:ISRG), a pioneer in robotic surgery which allows physicians to carry out complex surgeries via a minimally-invasive approach.

Founded in 1995, the Nasdaq-quoted group’s “quadruple aim” is to improve patient outcomes and reduce the variability of those outcomes; to minimise disruption to patients’ lives; to keep care teams happy with reliable, smart machinery and to lower the cost per patient relative to alternative treatment options. The latter ambition should, in theory, provide a return on investment for hospitals and healthcare systems.

Today, Intuitive’s main robotic device, the da Vinci, can be found in 67 countries across the globe. Almost 6,000 da Vinci products have been installed since inception and a surgeon starts a procedure using da Vinci machinery every 25.4 seconds. More than 8.5m procedures using Intuitive’s technology were completed in 2020 alone.

Yet the group still believes there is much more room to grow. Roughly 20m soft tissue operations take place each year in its markets overall. With ongoing innovation and greater scale, management reckons that many of those surgeries will be implemented using advanced technologies like Intuitive’s in the future.

And despite the slowdown in non-essential procedures brought about by the Covid-19 pandemic, investors also appear to be betting on better things to come. Intuitive’s shares have risen more than a half in the past 12 months.

Surgeons use the da Vinci system, which is now in its fourth generation, while seated at an ergonomic console viewing a 3D high-definition image of the surgical field. Interactive arms follow the surgeon's movements, their dexterity aided by Intuitive’s ‘EndoWrist’ technology which incorporates robotic wrist joints.

These systems can be used in numerous surgical operations within Intuitive’s targeted areas of gynaecology, urology, general surgery, cardiothoracic procedures and head and neck specialisms. Helping surgeons to navigate those different applications and develop their skills, Intuitive provides advanced training tools via a simulation programme.

Intuitive’s da Vinci sales stem from both direct sales and lease arrangements, meaning revenue is either recognised upfront or over time via operating lease transactions and usage-based models. The da Vinci system typically sells for between $0.5m and $2.5m.

But the da Vinci is not the group’s only revenue driver. The US medicines regulator has cleared Iris, Intuitive’s augmented reality (AR) imaging product, for use in kidney procedures. It also cleared the group’s Ion endoluminal system in 2019, enabling minimally invasive biopsies in the lung.

And Intuitive simultaneously makes money from the sale of robotic instruments and services. Indeed, it typically earns between $600-$3,500 in instrument revenues from every surgical procedure performed. Thus, such revenues make up 56 per cent of the group’s top line at $2.46bn in 2020.

As tools expire or wear out, they need to be replaced, generating further recurring revenues. In all, repeat sales, including instruments, services and operating leases, stood at $3.2bn last year, or 68 per cent of total revenue.

That sales model helped Intuitive to achieve a compound annual revenue growth rate (CAGR) of 18.3 per cent in the three years to 2019 (pre-pandemic), with earnings per share (EPS) rising at a rate of 22.9 per cent.

In geographical terms, group revenues extend beyond the US which accounts for just over two-thirds of the total.

Such international scale and the diversification of Intuitive’s product and service lines should  position it well as it faces off intensifying competition in its markets. Toughening up its barriers to entry, the group’s technology is also protected by more than 4,000 patents. As of New Year’s Eve, it had filed a further 2,000 patent applications.

Such defensive activity is essential; Intuitive is not alone in its field. Healthcare whales including Johnson & Johnson (US:JNJ: Buy, 11 Mar 2021) and Medtronic (US:MDT) are vying for a piece of the robotic surgery pie and arguably have the scale and wherewithal to make a success of it.

Intuitive must therefore continue to invest in research and development (R&D) to enhance its product-base. Particularly against a backdrop of pandemic uncertainty, which slowed down purchasing decisions at hospitals and prompted a 16 per cent decline in da Vinci systems shipped last year to 936. R&D costs have risen incrementally to reach 14 per cent of sales in 2020, facilitated by $6.9bn cash position with no debt.

Reflecting the potential threat of Intuitive’s rivals, a recent survey by bearish broker Oppenheimer found (among other takeaways) that physicians were highly receptive to switching to new platforms beyond Intuitive’s.

Still, a survey of 20 US surgeons by bullish JP Morgan found that many anticipated a steady increase in da Vinci procedures, helped partly by the fact that doctors have been trained on the da Vinci system. The bank sees flexible financing programmes and disciplined investments “as smart moves to grow the competitive moat ahead of new entrants”.

The current year has started well with Intuitive shipping 298 da Vinci systems during the three months to 31 March, up 26 per cent compared with the same period in 2020. Global da Vinci procedures rose 16 per cent.