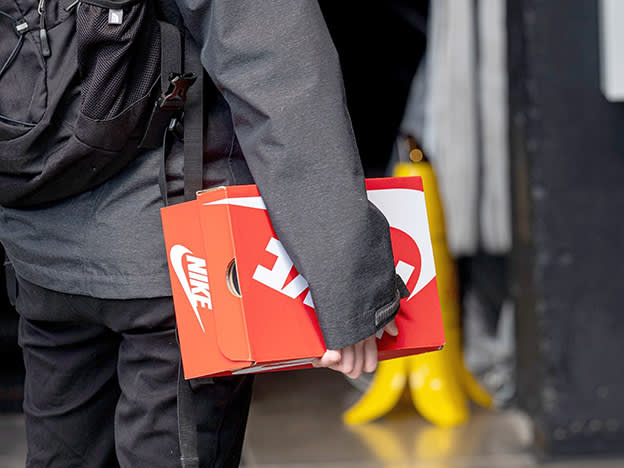 Nike: just do it?

Paintings, sculptures, jewellery and watches. All items that you might expect to fetch large sums of money at auction. A pair of old trainers, less so. Yet history was made last month when Sotheby’s brought down the hammer on prototype sneakers developed by Kanye West. The footwear changed hands in a private sale for a record-breaking $1.8m (£1.3m).

Worn by West during the 2008 Grammy Awards, the shoes were the product of a collaboration between the rapper and American retail giant Nike (US:NKE).

On the one hand, their huge price tag reflected the following garnered by West, the iconic status attributed to popular streetwear trends and the increasingly blurred boundary between sporting goods and high fashion. But on the other hand, it also marked another milestone for an Oregon-based company which started out small in 1964.

Nike, originally known as Blue Ribbon Sports, was founded by track and field coach Bill Bowerman and his friend Phil Knight. In its early days, it imported and sold Japanese-made running shoes.

Sprint forward almost six decades and the group today owns a portfolio of highly popular athletic footwear, clothing, equipment and accessories brands. Listed in New York, Nike commands a market value of more than $200bn when including its ‘Class A’ shares which are not held in public hands.

The company sells its products via Nike-owned stores, digital platforms and through various third-party retailers. It is the world’s largest purveyor of sports shoes and apparel. Indeed, reflecting its geographical spread, just under two-fifths of revenues stem from its domestic US market. As of last May, Nike employed roughly 75,400 people globally.

Aided by scale and diversification, the group’s revenues broke through the $30bn barrier during its 2015 financial year and topped $39bn in 2019 financial year before falling back due to the pandemic last year.

Not immune to Covid-19

Nike has not been immune to the havoc wreaked by Covid-19. Many of its stores have had to shut their doors for months on end under ‘stay at home’ mandates.

But the crisis has treated some retailers more kindly than others. Those with international reach and an extensive online presence have fared much better than smaller rivals. Nike is a prime example of such advantages.

Indeed, the group seized the chance while shops were closed to bolster its e-commerce revenues and accelerate its existing ‘direct to consumer’ (DTC) strategy.

On top of digital and DTC sales, Nike points to other major growth opportunities on the road ahead, including women’s clothing and continued overseas expansion. And investors appear to support that vision. Nike’s shares have risen more than a half in the past 12 months alone. As reflected in our Ideas Farm tables, the stock is also a favourite holding among international and sustainable funds.

Nike started pursuing direct connections with consumers in earnest in early 2017, when it launched its ‘Triple Double’ strategy (a pun on an impressive basketball feat). The group channelled these ambitions through its so-called ‘Consumer Direct Offense’ (CDO), a “new company alignment that allows Nike to better serve the consumer personally, at scale”.

Underpinning that approach is Nike’s membership model. Consumers can sign up to access the company’s training and run club apps, to gain early access to new Nike products and to benefit from other perks and rewards.

The ‘offense’ has progressed well. So well, in fact, that Nike launched a new “digitally-empowered” leg of the DTC journey called the ‘Consumer Direct Acceleration’ (CDA) last summer.

“Covid-19 offered a stress-test of our Consumer Direct Offense strategy”, wrote Donahoe in a shareholder letter alongside the group’s fourth-quarter results in July.

Nike had outlined a goal in 2018 for digital sales to constitute 30 per cent of its overall business by 2023. Having reached that goal more than two years ahead of plan, management reset its expectations – now projecting 50 per cent digital penetration.

The digital and DTC transition could have significant implications for Nike’s distribution network. The shift appears to make financial sense; an observation borne out by its latest numbers posted on 18 March.

Third-quarter revenues rose 3 per cent to $10.4bn, as virus-induced supply-chain challenges (namely port congestion) in the US were offset by 20 per cent growth in ‘Nike Direct’ sales to $4bn. Nike Direct relates to products sold directly to consumers through Nike-owned retail stores and websites.

Supporting that improvement was a 50 per cent rise in Nike-owned digital sales. Noting that its “ability to sustainably grow digital for the long term is rooted in our member connections”, Nike said its “members are more engaged than ever” – with an ascent of more than 60 per cent in monthly users.

In turn, the higher margin rate associated with digital sales contributed to overall gross margin expansion of 1.3 percentage points to 45.6 per cent.

However, despite its increasingly web-centric narrative, Nike still believes in the future of bricks and mortar stores. “[W]e do see a need and a really important role for a strategic physical presence, both ours and our partners,” Donahoe said in March. Working with a smaller number of third-party retailers – and sharing membership data with them – Nike aspires to deliver a “seamless” and personalised experience for customers across online platforms and real-life shops.

Such multi-channel operations are arguably essential to Nike maintaining its scale and dominance in an ever-more competitive market, where it must contend with long-entrenched rivals such as Adidas (GER:ADS) as well as newer labels like Lululemon (US:LULU). Both brands are also focused on DTC engagement.

The company also spends significant sums every year on ‘demand creation’ through advertising and promotions including endorsement expenses. This figure came in at 9.6 per cent of revenue in 2020, albeit costs have dropped recently amid fewer events and store restrictions.

Still, such commitments have not hampered shareholder returns. Nike has raised its dividend for 19 consecutive years and it plans to resume its share repurchase programme in the fourth quarter of 2021 after a pandemic-driven suspension. What's more, the draw of the brand is evident in the near 36 per cent return on invested capital achieved in 2019, although this fell to closer to 26 per cent as a result of the pandemic hit.

Investors may also take comfort in data that suggests family-controlled companies have historically performed well in times of market stress. Founder Knight was chief executive of Nike until 2004 and is now ‘chairman emeritus’, while his son Travis is a director.

That said, the majority of Nike’s non-public ‘class A’ shares are held by Knight’s company ‘Swoosh LLC’ and some might balk at the level of control wielded by class A shareholders, who can (among other advantages) elect three-quarters of Nike’s board directors. Nike concedes that such provisions could discourage or prevent a takeover which investors might believe is in their best interests.

Other potential risks include trade tensions between international governments and concerns that Nike’s progressive marketing campaigns centring on social justice are not reflected in its internal culture – something the Financial Times explored earlier this year.

The hope, then, is that Donahoe will prioritise ensuring that Nike provides a positive, inclusive work environment.

A forward price/earnings (PE) multiple of 35 times is slightly ahead of Adidas but behind Lululemon and Under Armour (US:UAA). This doesn’t seem too steep, considering Nike’s market leadership and DTC-rooted growth agenda which looks set to continue to support growth backed by high returns on investment.