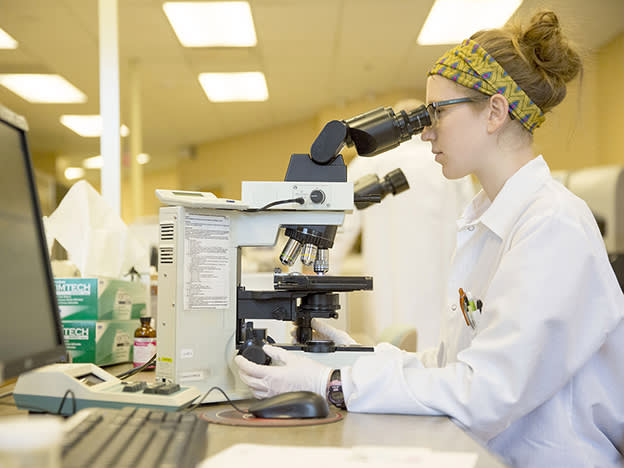 Invest in the 'golden age' of biotech

Biotechnology is an area from which some of the world's most exciting innovations emerge. But as seasoned healthcare investors know, it’s a sector that can deliver heavy losses as well as huge gains. Biotech Growth Trust (BIOG) has certainly had its share of volatility recently, with its share price rising 68 per cent last year but down 24 per cent between the start of this year and 21 September.

Volatility aside, Biotech Growth Trust has delivered strong long-term performance. Despite the recent setback, it made a net asset value (NAV) total return of 70 per cent over the five years to 21 September, ahead of Nasdaq Biotechnology index's 62 per cent. It was also trading at a discount to NAV of 8.3 per cent, which compares with a 12-month average of 0.7 per cent. This could prove an attractive entry point for long-term investors with a high risk tolerance.

Biotechnology companies focus on novel drug development and clinical research aimed at treating diseases and medical conditions. The sector was critical in the development of Covid-19 vaccines last year, including ones that use a fairly new gene sequencing technique known as messenger ribonucleic acid (mRNA). The hope now is that gene sequencing will be adapted to help treat all sorts of other diseases.

“The industry is in something of a golden age as new advances in technology, our understanding of the genome and our ability to manipulate genes open up new territory,” says James Carthew, head of research at QuotedData.

Asset manager Baillie Gifford believes that the industry is at “the cusp of transformation”, as technological innovation combined with new funding and business models may change the economics of the drug making business, making the whole process faster, cheaper and more predictable with higher success rates.

However, most biotech companies fail to bring drugs to market. A study by the Biotechnology Innovation Organization in 2016 found that 90 per cent of clinical programmes ultimately fail to get regulatory approval in the US, with areas such as alzheimer’s and cancer having a lower success rate. The study also found that 92 per cent of biopharmaceutical companies are unprofitable at any given time. This makes successful stock selection vital for success with actively managed funds.

Biotech Growth Trust is managed by US-based OrbiMed, one of the world’s largest healthcare-dedicated investment firms. Geoff Hsu, manager of the trust since 2005, selects stocks on the basis of their individual merits and aims to find biotech companies across the world with the best growth potential. The trust had 92 holdings at the end of July, up from 67 in July 2020, as he has increased its exposure to emerging and pre-initial public offering companies where he believes the best growth is. During the trust's financial year ended 31 March 2021, it invested in 39 initial public offerings and 12 crossover deals – a private company's last funding round before listing – seven of which have since listed.

The trust’s bias to small-cap biotech companies is a cause of its underperformance relative to Nasdaq Biotechnology index (sterling adjusted) in recent months. However, Hsu believes that much of the decline in small-cap biotech recently has been “unrelated to fundamentals” and he expects this area to rebound in the final months of 2021.

The trust is underweight companies that have played a lead role in vaccine development, such as BioNTech (US:BNTX) and Moderna (US:MRNA), which has also hindered relative performance this year. However, Hsu believes that the share price success of these companies has led to excessive valuations, commenting in August that “we would expect more rational valuations for these stocks as the Delta variant cases begin to decline in the US”.

The trust’s investment policy states that at the time of investment, a maximum of 15 per cent of gross assets may be held in a single stock and up to 10 per cent in unquoted investments, including private equity funds managed by OrbiMed and its affiliates.

The trust can also take on gearing – debt – worth up to 20 per cent of its net assets, and this was 8.9 per cent at the end of July.

While the trust's number of holdings has been growing, it is relatively concentrated with its top 10 holdings making up almost a third of its assets. This is one of the reasons why it has been more volatile than its peers.

The trust’s largest holding, Vertex Pharmaceuticals (US:VRTX), is developing treatments for the underlying cause of cystic fibrosis. The company has experienced poor share price performance this year following disappointing clinical trial results, but it is currently researching an mRNA gene therapy that could cure cystic fibrosis in a single treatment.

The trust’s second-largest holding, Horizon Therapeutics (US:HZNP), used to be a speciality pharmaceuticals company but has acquired some drugs to treat rare diseases as these tend to have strong growth prospects. One of these drugs, Tepezza, was approved by the US Food and Drugs Administration last year and is the first treatment for thyroid eye disease, a rare condition where the muscles and fatty tissues behind the eye become inflamed. Horizon’s share price is up 35 per cent in the year to date following Tepezza’s strong sales.

Mergers and acquisitions, a key part of the investment case for emerging biotech, have continued despite the pandemic. Recent examples that benefited the trust include AstraZeneca’s (AZN) acquisition of Alexion Pharmaceuticals for $39bn (£28.51bn) and Gilead Sciences’ (US:GILD) acquisition of Immunomedics for $2bn.

Success or failure with biotechnology investments is driven by the approval of new therapies. As Carthew puts it, “the outcome of clinical trials and regulatory decisions on drug approvals can trigger savage moves in share prices”.

Biotech is also politically sensitive with the risk of limits on drug prices. The industry argues, with some justification, that it needs to be rewarded handsomely for successful therapies to cover the costs associated with therapies that don’t make it. Despite investor fears that the Democrats winning US elections last year would have negative implications for the healthcare industry, Hsu believes that the election results largely remove political risk for the biotechnology industry. President Biden is building on Obamacare rather than pursuing a socialised medicine scheme.

Biotech Growth Trust’s increasing China exposure may also prove to be a drag on performance as Beijing cracks down on private sector profits. However, the scale of the opportunity in China is huge and the innovation rate is very fast. The trust’s largest Chinese holding, Yisheng Pharmaceutical (CHI:002566), is up 18 per cent over the year to 20 September, according to FactSet.

There’s no doubt that biotech is a risky business, but Biotech Growth Trust has a good long-term track record with an annualised share price total return of 20 per cent over the decade to 31 July, according to analysts at Edison. So given positive sentiment on the sector, a relatively supportive regulatory and political environment in the US, and a discount to NAV of about 8 per cent, Biotech Growth Trust looks like it is at an attractive entry point. Buy.