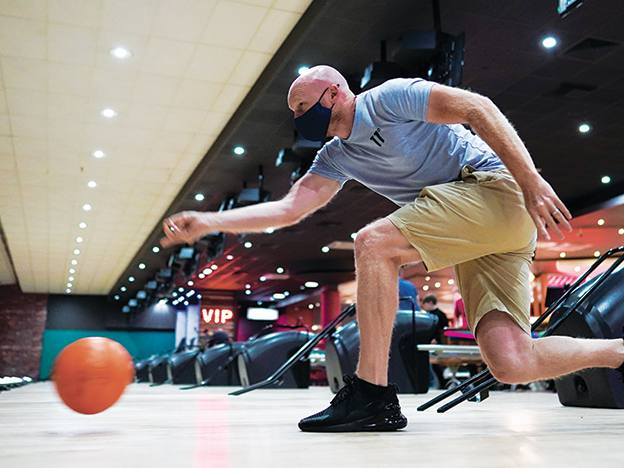 There is much debate about which Covid-19 impacts are transitory and which are permanent. Inflation is the obvious one. Then there is the decline of air travel, where the concern is that demand for business trips will never fully return. Cinemas also face structural threats because studios are releasing movies on home streaming platforms. For Cineworld (CINE) and International Consolidated Airlines (IAG), these trends are existential dangers to business models that could lead to consistently lower share ratings.

Hollywood Bowl (BOWL), on the other hand, faces no such threats. It is the UK’s largest bowling operator and has seen demand for ten-pin bowling bounce back immediately after lockdowns were lifted. According to Google Trends, more people searched 'bowling' in the UK this August than any other month on record (see chart). This was reflected in Hollywood Bowl's recent trading update, where August revenue was up 50 per cent compared with 2019. “Trading in the ‘staycation summer’ was exceptional. This trading update illustrates that the relevance of bowling is undiminished and consumers have returned to the sites with confidence,” says AXA fund manager Dan Harlow.

Hollywood could capitalise on the swift return of customers because it continued to invest throughout lockdown. In 2020 capital spending was 10 per cent higher than 2019. The investment included three refurbishments and the opening of three new golf putting centres and one new bowling centre. This continued faith in both its business and in the UK public’s love for bowling has left it in a strong position now that full-on pandemic restrictions are (hopefully) over for good.

What is the business?

Hollywood Bowl is the UK's leading bowling business. At the end of 2020, it owned 61 of the 312 ten-pin bowling centres across the UK. Ten Entertainment (TEG) is second on the list with 45, followed by QLP (11) and Disco Bowl (8). Hollywood Bowl’s three main sources of revenue are bowling (48 per cent), food and drink (27 per cent) and amusements (24 per cent). The plan is to bring in as many bowlers as possible then sell them food, drink and arcade games while they are there.

Ten-pin bowling is the most popular social leisure activity in the UK, according to a 2019 survey by market research firm Mintel. The survey showed that 38 per cent of respondents were interested in going bowling in the future, closely followed by mini-golf with 37 per cent. It is these figures that are driving Hollywood Bowl’s strategy. It has a well-established bowling brand and is now expanding into mini-golf through its Puttstar brand. In March 2021, it had four Puttstar centres with eight more sites under negotiation.

The company’s centres are predominantly located in out-of-town retail parks, alongside cinemas, restaurants and shops. “Such 'experiential' leisure is attractive to landlords as it drives footfall to retail parks throughout the day. In a period of financial constraint, the company places more capital upfront while securing longer rent-free periods in the process,” according to AXA's Harlow. Across the first halves of 2020 and 2021, £6.1m (37 per cent) of combined rent was written off by landlords, while it managed to defer a further £4.6m (28 per cent).

The reduction and deferral of rent was part of an impressive cost-management effort over the past 18 months. Despite its revenue dropping 43 per cent from its 2019 peak down to £74.6m for 2020-21 it still remained profitable. This was because, thanks to furlough and property costs negotiations, it reduced its operating costs by 33 per cent.

Currently it has 61 bowling centres with three under negotiation. It is also investing significantly in its mini-golf offering and is currently under negotiation for eight new Puttsar centres to add to the three it has. In the three years from 2017 to 2019 it averaged a 22 per cent return on equity (ROE), which means investors can be fairly confident that this investment will generate cash down the line. For comparison, Ten Entertainment’s ROE was 16.2 per cent during the same period.

Broker Numis sees the Puttstar brand as an “incremental part of the investment case” and says that when it visited a centre in York “it was reassured by the management team's ROCE-led discipline”. It is forecasting that its cash profits (Ebitda) will rise to £43.8m for full-year 2022, 13 per cent above its 2019 peak. Passing this peak in 2022 would allow Hollywood to fund growth internally and resume dividend payments, according to the broker.

These assumptions are based on the assumption that it will open four new centres in that time. Management's target is to open 14-18 new centres by 2024. It is also upgrading its centres with so-called pins on strings, which speeds up the racking process. The ROI for pins on strings is 30 per cent and it has 24 centres upgraded so far.

Amanda Yeaman, investment director at fund manager Abrdn, thinks there is still lots of space to expand in a fragmented market. “Our investment case has three main drivers – consolidation of a fragmented market to gain market share, diversifying of the core offering and capitalising on digital capabilities. The majority of bowling sites face little direct competition from other bowling centres. This lack of direct competition allows centres to pass on cost increases to customers,” she says.

Resurgence of Covid-19 and troublesome winter

The obvious threat to Hollywood Bowl is a surge of Covid-19 infections during the winter, when bowling alleys are most in demand. The concern is less that the government will lockdown again but that a sharp increase in cases will put off customers from going to bowling alleys. Rising wages and the inability now to furlough employees (last year Hollywood furloughed 98.6 per cent of its employees) means it would be trickier for Hollywood to remain profitable than in 2020.

The group also has a lot of lease liabilities. Its net debt (including lease liabilities) is £164m. In the short term, its balance sheet is healthy, only £21.3m of its debt is current and it has £37m of cash, but a bad winter would take its toll. Rising inflation and higher energy prices will also reduce the disposable income its customers have to spend on recreational activities.

The good news is that Hollywood Bowl is an affordable place to bowl. Its spend per game is £10.16, with the cost of bowling just under £5. At Ten Entertainment, the cost of bowling is £5.23 and total spend per head is £14.80. Despite having lower spend per game, Hollywood still has higher operating margins than Ten Entertainment. This implies the ability to undercut it further if necessary, while also having more potential for margin improvement if it chose to raise prices.

True, there are many uncertainties about the pandemic's long-term effects, especially on consumers' behaviour but, in the wider scheme, Hollywood Bowl is likely to escape relatively unscathed. Meanwhile, its shares trade on a 12-month forward PE of 16.3, according to consensus forecasts from data provider FactSet and broker Numis forecasts that its free cash flow yield for 2022 will be an excellent 4.3 per cent. At 240p, the shares look excellent value for the long term.