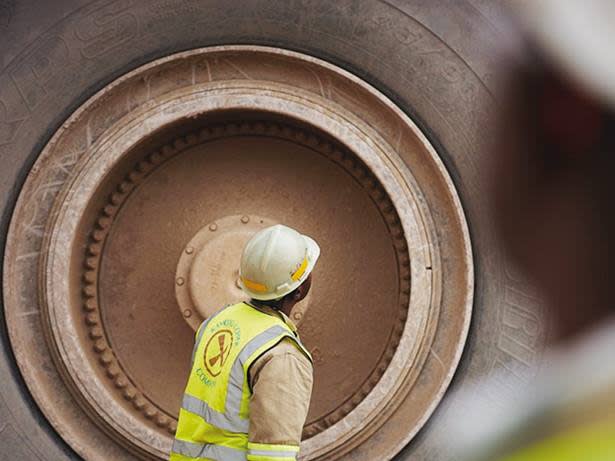 Former City fund manager John Rosier's commodity exposure has tempered losses, but his next challenge is when to begin switching away

Difficult times. The build-up of Russian hostility and eventual invasion of Ukraine on 24 February has dominated markets. The western response, which started slowly, quickly gathered pace. NATO and EU members announced an impressive package of financial sanctions and support in the form of military equipment. It is too early to assess the eventual success of these sanctions, but the pain inflicted on the Russian economy will be huge. The rouble has collapsed, and already oil and other exports are being hit as Western customers stop buying. There will also be a price to pay in the West in terms of higher inflation – higher inflation in virtually every commodity from oil, though metals to food. Higher raw material prices will feed through to general inflation and act as a tax on consumption. Forecasts for economic growth are likely to be reduced, and in the short term, at least there will be pressure to increase interest rates.

As far as markets were concerned, equities were not the place to be in February. The Dax was off 6.5 per cent, closely followed by other Continental European markets. The CAC was off 4.9 per cent, and the FTSE MIB -4.8 per cent. The S&P 500 lost 3.1 per cent in the US and the Nasdaq 3.4 per cent. The high exposure of the FTSE All-Share to mining stocks helped it limit its fall to just 0.5 per cent.

2022 has been about larger companies with the FTSE 100 up 1 per cent to the end of February. Meanwhile, the FTSE 250 was down 10.2 per cent, FTSE Small Cap -7.8 per cent, and FTSE Aim All-Share has plummeted 14.5 per cent. Given that background, I'm reasonably pleased that the drop in the JIC Portfolio value wasn't worse.

What worked and what didn't in February? It was all about commodity exposure. My commodity stocks, which also happen to be my most significant positions, generally performed well. Blackrock World Mining (BRWM) led the way, up 15.6 per cent. Sylvania Platinum (SLP) was up 9.1 per cent, Serica Energy (SQZ) 8.2 per cent and Anglo Pacific 2.9 per cent. I was surprised by Central Asia Metals (CAML), and Lundin Energy's (SW:LUNES) respective falls of 5.9 per cent and 7.1 per cent. Maybe sentiment towards Central Asia Metals is being impacted by its exposure to Kazakhstan, which recently received support from Russia to quell unrest. Fallers of note were SigmaRoc (SRC) down 13.7 per cent, Somero Enterprises (SOM) down 13.3 per cent and K3 Capital (K3C) down12.8 per cent. There was no news from the former two, but K3 Capital issued robust results for its first-half ending 30 November 2021. Revenue and profits were a few per cent higher than indicated in its early December update. It also noted that it had seen a solid start to the second half. If UK economic growth stays reasonably robust, K3 Capital should continue to see good growth. Valuation looks attractive for the growth on offer with a May 2022 PE ratio of 18x and yield of 3.7 per cent, falling to 14.3x and yield of 4.7 per cent in its next year to May 2023. The timing of my purchase of Somero Enterprises in January does not look very clever. Hopefully, imminent results will prompt a recovery. I hope I haven't bought a cyclical stock at precisely the wrong time in the cycle.

The Funds' Portfolio was pleasingly up 1.2 per cent, comparing favourably with the 2.5 per cent drop in the FTSE All-World. Year-to-date, the Funds' Portfolio is down 5.8 per cent, slightly better than the All-World's -6.3 per cent. Since its inception in June 2020, the Funds' Portfolio is up 27 per cent, compared to 26.2 per cent for the All-World. Again, February was all about the Funds' exposure to commodities. Blackrock World Mining, up 15.6 per cent is its most significant position. L&G Gold Miners ETF was up 14.6 per cent, and Blackrock Energy and Resources Income Trust (BERI) gained 9.5 per cent. In October, I added Blackrock Energy & Resources to the Portfolio and increased it further in January. Worldwide Healthcare Trust (WWH) and Biotech Growth Trust (BIOG) seem to have settled down after a poor year's performance. Both were marginally up. The biggest fallers were Blackrock Greater Europe, down 8.8 per cent, BlackRock Throgmorton Trust (THRG) down 8.8 per cent and JP Morgan Emerging Markets 7.1 per cent.

It was a quieter month on the dealing front. Lloyds Banking Group results on 24 February did not please the markets, but to be fair, it did not choose a good day. I took advantage of the 10 per cent fall in the share price to add to my position at 46.4p. The 2p dividend looked to be a smidgeon behind expectations but even so, gives a yield of 4.4 per cent. In addition, it announced a £2bn buyback, equivalent to around 6 per cent of its market capitalisation at the current share price. On the last day of the month I sold Central Asia Metals, realising a reasonable profit. Selling CAML was a difficult decision as there is so much to like about the company, and it looks good value. I thought, however, that it was better to be safe than sorry. With most of its operations based in Kazakhstan, it could be affected if geopolitical events take a further turn for the worse. I remain very bullish on copper, so I added a 5 per cent position in Global X Copper Miners ETF to replace Central Asia Metals on 28 February at 2186p.

I was more active in the Funds' Portfolio, further shifting the balance from "growth" to "value". I reduced Chelverton UK Equity Growth, Premier Miton UK Equity and Fundsmith. I initiated a Global X Copper Miners ETF (CPOX) position at 2137p on 10 February. On 24 February, I added to L&G Gold Mining ETF (AUCCO).

There has been quite a shift within the Funds' Portfolio from growth to value over the last year. My calculations suggest growth exposure has fallen by 35-40 per cent, and value increased by 30 per cent. Cash and gold have risen from 3 per cent to 18 per cent.

Lundin Energy reported a solid end to the year in its 2021 results. It aims to complete the sale of its exploration and production assets to Aker BP by Q3. In the meantime, it increased its quarterly dividend by 25 per cent. At the current share price of 400 SEK (£31.80), the planned dividend equates to a full-year yield of around 5.2 per cent before withholding tax. Blackrock Energy and Resources Income Trust announced its intention to pay four quarterly dividends of 1.1p in 2022. A 10 per cent increase is nice, but hopefully, it will increase the Q4 dividend again. For 2021 it intended to pay four 1p dividends but had to pay a Q4 dividend of 1.1p to avoid breaching investment trust regulations. At the current price of 127p, 4.4p gives a yield of 3.5 per cent.

Six weeks into its new year, CentralNic (CNIC) updated the market on trading. It said it expected results to be at least at or above the high end of current expectations. It accompanied 2021 results published on 28 February with an acquisition, financed principally through a share placing at 120p. It was good to see an open offer enabling private investors to participate. It looks like a typical CentralNic acquisition. It should be immediately earnings enhancing. I think the valuation of 13.4x 2022 earnings looks attractive for mid-teen earnings growth on current forecasts. Sylvania Platinum published its half-year results on 31 December. It declared a windfall dividend of 2.25p per share. On 31 December, it had cash of $110mn. That cash balance should swell in the second half, given higher platinum group metal prices. A final dividend at the very least in line with last year's 4p must be in the offing. A yield of just over 6 per cent looks good to me.

I do not take the income out of the JIC Portfolio as reinvesting it delivers a significant contribution to the total return – the importance of compound income.  It was pleasing therefore to see that income received in 2021 climbed to a record £14,336. My commodity holdings were among the highest contributors.

My spreadsheet suggests that barring recession, 2022 will be a bumper year – I’m expecting dividend income of £20,509 from the portfolio as it is currently constituted. Recent announcements of a final dividend of 27p from BlackRock World Mining and special dividends from Somero of 19.2 US cents and from Sylvania Platinum of 2.25p all help. £20,500 equates to a portfolio yield of around 3 per cent at current prices.

Given a background of rising inflation, I started 2022 thinking the outlook was foggy – it's just got a lot murkier. Rapidly growing commodity prices will inevitably feed headline inflation figures this year. The job of the central banks has become even more difficult. The Federal Reserve struck a hawkish tone at its 16 March meeting as it increased rates by 0.25 per cent. Ten-year government bond yields in the US and UK fell back in the first week of the invasion but have since increased. I don't believe equity indices have bottomed yet. All too often, high oil prices lead to recession.

The big decision I will need to make in the coming weeks is at what stage I should reduce my commodity exposure. My exposure to commodity stocks has been beneficial during the first half of March. In early March, the weighting to commodity stocks approached 50 per cent of the JIC Portfolio. The plan is to reinvest some of my significant position in these stocks in more attractive long-term growth companies in the coming months. Even if I reduce it to 30 per cent, it leaves me with 15 per cent plus to invest elsewhere. Subscribers to www.jicuk.com know that I have started that process already but more on that in next month's column.

I monitor the top positions in the trust and funds I own, and valuations are beginning to look a lot more attractive. They are still some way off rock-bottom bear market valuations but are looking much more tempting than a few months ago. In short, caution is still the order of the day.