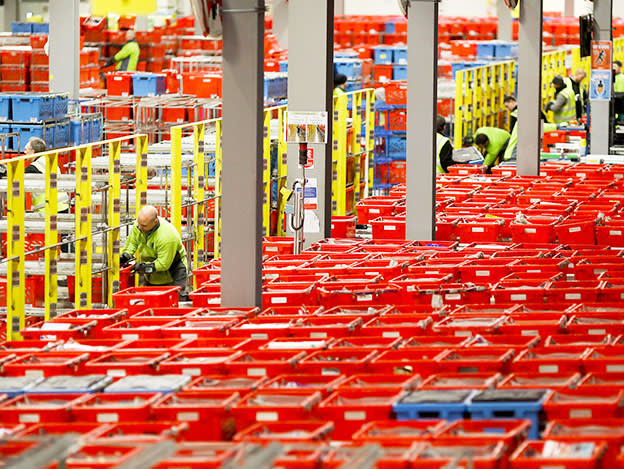 Ocado (OCDO) was founded in 2000 by a trio of former Goldman Sachs bankers. First known as Last Mile Solutions, by 2021 the online-only grocer had been renamed to evoke fresh fruit, by using a made-up word that sliced the first two letters off ‘avocado’.

Ocado’s mission is to “change the way the world shops”, an aim that the company claims to have been “meeting for two decades”.

If this visionary rhetoric sounds more like the words of a tech giant than a supermarket, that isn’t accidental. Although Ocado only started billing itself as a “technology solutions provider” a few years ago when it began licensing its tech to other retailers, the company had a futuristic idea: using robots, rather than humans, to pick and pack grocery bags for delivery.

Today, thousands of its patented robots whizz around grids inside its UK warehouses, the largest of which are known as customer fulfilment centres (CFCs), where they enable an average of 357,000 orders every week. Its latest bot, the 3D-printable Series 600, works with a robotic arm to place grocery orders in vans, an innovation that is forecast to reduce on-site labour costs by 30 per cent.

‘Forecast’ being the operative word here. Ocado’s critics have accused it of being a 'jam tomorrow' business, one that always requires more investment, but procrastinates on profitability. True to its tech firm status, the company has only turned three full-year profits in its history, and posted a £177mn pre-tax loss in the 12 months to November 2021. Consensus estimates predict profit lift-off won’t arrive until 2025, complicating any attempts to define a reasonable value for the business.

This has led to a somewhat tempestuous relationship between the company and investors, and periodic appearances among London’s most-shorted stocks. The shares have already had a rocky year, and are currently 41 per cent lower than their price of 2,100p a year ago. Nevertheless, Ocado’s market capitalisation is still nearly double that of larger multi-channel grocer J Sainsbury (SBRY), and almost three times the size of joint venture partner Marks and Spencer (MKS).

A few recent catalysts suggest Ocado’s reversal of fortune could be more than a temporary blip in its quest for world domination.

Three-quarters of revenues come from its original UK retail operation, which actually ended 2021 with positive earnings of £150mn before interest, tax, depreciation, amortisation and eliminations – which Ocado defines as revenue and costs arising from intra-group transactions.

Since 2020, Ocado has benefitted from grocery’s pandemic-accelerated shift online, leading to a near-doubling in its market share between 2016 and 2021. As of March 2022, its share stood at 1.8 per cent.

Over that same period, digital sales almost tripled as a share of the overall grocery market. The rest of the online boom was largely swept up by the big four – Tesco (TSCO), J Sainsbury, Wm Morrisons and Asda – who together mop up two-thirds of all grocery sales in the UK.

Traditional grocers’ scale allowed them to meet higher demand for online delivery slots during the height of pandemic restrictions, something that Ocado – as an online specialist – struggled to replicate. Orders per week and per-van deliveries fell in 2020 as the robo-grocer was hamstrung by issues including a shortage of truck drivers and an electrical fire at its largest automated warehouse in Erith. A large jump in average basket sizes still propelled sales higher, but these gains have already started to fall off, with Ocado blaming a 5.7 per cent decline in the 13 weeks to 27 February on consumers behaving “more like they did pre-Covid”.

Ocado’s pure-play online offering is now less of a differentiator given the big four’s investments in their own systems in recent years. Tesco has launched urban fulfilment centres that allow it to deliver large basket shops on-demand, while Waitrose, Aldi, Co-op and Sainsbury’s have all partnered with rapid delivery apps such as Deliveroo (ROO) and Gorillas to offer last-mile deliveries in an expanding list of locations.

Although Ocado should be a natural player in ultra-fast deliveries, its own Zoom service has been dogged by labour trouble and, more recently, branding issues. In March, Ocado said it was redesigning its ‘Z’ logo after it drew comparisons to the so-called ‘Zwastika’ symbol daubed on Russian tanks in Ukraine.

The future is not getting rosier for UK retail, with grocery price inflation recently hitting its highest level in 10 years, and motivating customers to switch from mainstream to discount supermarkets, according to Kantar. Analysts at Bernstein Research, who cut their FY2022 growth forecasts for the segment from 13 to 7.8 per cent, say it is “likely to be more difficult for Ocado to continue to recruit new customers given the relatively high cost of their retail products versus Tesco and the discounters”.

Meanwhile, the UK government is consulting over the introduction of an online sales tax, which would pay for a reduction in business rates and benefit bricks-and-mortar supermarkets. Research from Oxford Economics found the tax would lead to 6.5 per cent lower online retail sales overall, hampering Ocado’s competitive advantage. The controversial consultation ends in May.

Ocado bulls say that challenges in the retail business will be offset by a new strategy to convince other retailers to pay for its technology. At around 2 per cent of sales, the ‘International solutions’ segment currently makes up a small fraction of business, but analysts optimistically estimate its revenue contribution will rise to 16 per cent by 2027. Deals are in place with US-based Kroger, France’s Casino Groupe, and Auchan in Spain and Poland to roll out some 48 confirmed CFCs by 2035.

The problem is that these CFCs are a major investment, and typically take two years from initial construction to become net earners – when clients are paying capacity-linked fees to Ocado. Annual capital expenditures have quadrupled since 2018 to £680mn in FY2021, and are expected to rise again in 2022. In particular, 2022 will be a “crunch year” for Ocado, since it will go from four to 12 live CFCs, with another 19 in build mode, according to Bernstein.

Chief executive Tim Steiner has stated that he prefers Ocado to fund its growth via debt rather than equity. Analysts say it is likely that once Ocado has burned through its £1.5bn in cash reserves, it will come back to the bond market for a top-up in 2022 or 2023.

The bad news for Ocado is that being a capex-heavy business with sales growth in the single digits is becoming more difficult. Rising interest rates are making corporate bonds such as Ocado’s more expensive to issue, with its most recent £500mn bond last October carrying a coupon rate of 3.875 per cent. This is many times higher than what it is paying for bonds issued in 2019 and 2020, and implies a higher cost of capital in the future.

An alternative would be for Ocado to limit its pace of growth by signing fewer deals. The more deals Ocado signs, the more it raises short-term capex requirements and delays profitability. However, an analyst at RBC Capital Markets told Investors’ Chronicle that Ocado’s current valuations can only be justified by assuming a “faster pace of capacity expansion going forward”, suggesting that any slowdown in deal activity could damage the share price.

Deals might be harder-won in future, in any case. Although Ocado claims to be the most efficient player in this space, capable of delivering a 50-item shop with only 15 minutes of staff labour, online grocery delivery is growing fiercely competitive. Amazon (US:AMZN) is developing automated deliveries, while Google-owner Alphabet (US:GOOGL) is piloting delivery via drone in Texas.

Another near-term catalyst for the share price will be any news of Ocado’s international legal battles. Norway-based company Autostore has claimed that its grid-based technology formed the basis of Ocado’s offering, and the two automated warehousing companies have been going back and forth in the courtroom for years. Ocado racked up £28mn in legal bills in 2021 alone. There is no clear winner thus far, even if a favourable ruling from judges at the US International Trade Commission sparked a one-day £1bn jump in value last December. A case was ongoing in the UK at the time of writing.