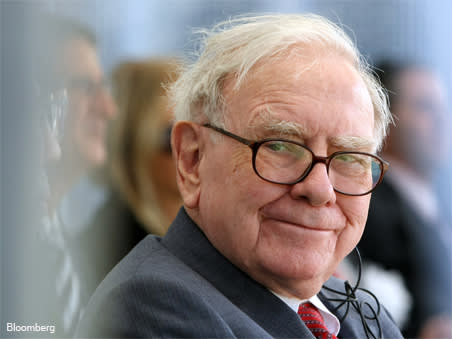 What does Buffett see in HP?

Most British schoolchildren will have some understanding of the Great Depression by reading Of Mice and Men, in which George and Lennie’s struggle to escape the drudgery of their life as ranch hands acts as a metaphor for everyone’s daily struggle for existence. While Warren Buffett (born 1930) may not remember the full extent of the Depression, it is certainly obvious that some of his earliest money-making ventures bear the stamp of those troubled economic times. According to his biography, “Warren was so desperate to make money that in 1938, in the sweltering summer heat of Nebraska, he walked miles to the racetrack where he spent hours on his hands and knees scouring the sawdust-covered floors for discarded racing stubs, hoping to find a winning ticket.”

While an endearingly pitiable anecdote, it does also say something about Berkshire Hathaway’s (US:BRK.B) subsequent approach to investing in the US stock market, which encompasses both the search for unloved gems and unbeatable brands at reasonable prices. While Alex Newman smartly dissected Berkshire’s annual jamboree recently, from an investor’s point of view it is worth analysing Berkshire’s individual purchases and figuring whether there are other opportunities available that might mirror their fundamentals, particularly now that the US market is starting to correct heavily.

In the current climate, it is worth remembering that companies are dealing with a combination of unprecedented inflation in input costs, combined with uncertainties over their supply chains. So Buffett has gone with investments that he understands, and which can deliver a safe margin of income over the cost of inflation that all investors are currently hunting for. Berkshire took a six-year pause before diving into the market earlier this year and buying Alleghany (US:Y) outright, alongside a large stake in printer manufacturer and software company Hewlett Packard (US:HPE). Setting aside our own US value portfolio this time, analysing both of those purchases in detail can produce an insight into Buffett’s thinking and the state of the US market as a whole.

It is fair to say that Berkshire Hathaway’s surprise 11 per cent stake in computer, printer and cartridge maker Hewlett Packard raised quite a few eyebrows. It is worth noting that the stake is relatively small in the context of Berkshire’s overall holdings – Apple alone constitutes around 45 per cent by value of the publicly listed part of the portfolio – but the boring, but vital nature of the business, plus its brand and position in the US market, must all have played a role in the investment decision making. It also helps that the recent accounts reveal a marked level of improvement.

In the end, it all comes down to cash and HP is currently raking it in. At the last set of full-year results the company reported free cash flow of $3.5bn (£2.9bn), a five-year high. This is undoubtedly due to a return of demand after the worst effects of the pandemic subsided, but also ongoing issues with supply chains. In this case, a need to restock to meet potential demand, which is clear to see in rising inventory levels to meet expected higher orders. Those expectations were largely fulfilled at the first-quarter results and higher inventory helped to support enhanced order levels. Notably, HP is still producing elevated levels of free cash – more than $500mn during the first quarter, with the expectation that this will come in at between $1.8bn and $2bn for 2022. Overall, that is pushing HP’s return on assets well above the long-term average. Last year it was more than 17 per cent, compared with a five-year average of 11.9 per cent.

So, overall, an improving trend which is what attracted Berkshire Hathaway – that and a price/earnings (PE) ratio of just nine, just under half the PE rating for the S&P index prior to recent falls. The only fly in the ointment is the question of whether the penchant for strategic mistakes that plagued HP over the past decade is now firmly behind it. The ghost at the feast is still the disastrous $11bn takeover of software maker Autonomy that resulted in an acrimonious and, in part, ongoing legal case. As well as being deeply embarrassing, the affair exposed infighting and disagreements between key HP insiders that contributed to the company’s poor strategic decision-making.

According to academic Stephen Kahlert, author of Leadership & Change Management: A Case Study of HP, the company’s main problem over the years was a “top-down” management culture that was primarily cost driven – for example, the company even cut back on the number of rubbish bin collections at its headquarters. The net result was anarchy when weak leadership at the top allowed factions and infighting to develop between the software business and the traditional manufacturing business. The answer was to spin-off and merge parts of the software business with Microfocus in 2017, while retaining the core software-as-a-service business which, judging by the gradual improvement in its core numbers in the intervening period, seems to have been the correct course of action.

In other words, if Berkshire Hathaway was observing HP closely, it waited until the corporate actions taken by new management started to bear fruit before making a move, which may have also been delayed by the impact of the pandemic. It's worth bearing in mind that for all its past dysfunction, Hewlett Packard is a highly recognisable brand that holds its place alongside a highly select group of technology peers. It also has pricing power; the cost of its consumable ink cartridges, for example, can be raised well above the rate of inflation owing to many people using its branded cartridges in their printers. Overall, that was clearly too tempting an opportunity for the Sage of Omaha to ignore.

Berkshire’s other main purchase this spring, Alleghany, is in many ways a more interesting deal. To begin with, it was an outright purchase rather than just a stake build, and Berkshire Hathaway was prepared to shell out over $11bn for a conglomerate of disparate businesses. While Alleghany’s core business is insurance and reinsurance, a separate holding company has companies manufacturing everything from precision machine tools to cemetery furniture and gravestones, and the eccentric collection originates because it started out life as a simple holding company for accumulated investments.

Alleghany fits neatly into Berkshire’s existing insurance businesses and should boost its presence in personal lines such as car insurance, as well as upping its game in the reinsurance market. What the company has in common with Berkshire Hathaway is a clear ability to generate significant amounts of free cash. This has varied depending on the underlying claims market, but the trajectory has clearly been upwards and reached an eight-year high of $1.8bn at the last results. The free cash is important as it funds a dividend payout that prior to Berkshire’s acquisition stood at nearly 9 per cent, with a PE ratio of around 11 only slightly under the S&P 500 multi-line insurance index average of 11.5. The impression is created that one concern for Berkshire Hathaway in buying a high-yielding insurer is that the company is looking to deploy capital as way of offsetting the impact of inflation on its overall cash pile – Berkshire still holds at least $130bn of cash.

The shakiness of the underlying US indexes, particularly the much more volatile Nasdaq, is likely to offer more buying opportunities for value investors in the coming months. With corrections coming rapidly across the board, it cannot be long before Berkshire Hathaway makes its next move.

Some shares have clearly suffered more than others. There aren’t many tech firms on the Nasdaq that haven’t seen 12-month falls of 50 per cent, or more; as the market reprices their prospects, and some large-cap firms have seen share prices retreat to levels that are clearly a knee-jerk reaction to the general sell-off. For example, the likes of Pfizer (US:PFE) are currently yielding 9.1 per cent on a PE ratio of just 11, giving back 17 per cent over the past 12 months as the impact from the pandemic on vaccine sales started to soften. Pfizer also boasts a very solid looking 18 per cent return on capital employed, driven in part by sales of its Covid vaccine. It seems that the market’s expectation that the boost will be only temporary has led to a sell-off.

Now that poses the question: are pharmaceuticals an area that Berkshire Hathaway would again be interested in? Berkshire last year pared back investments in the likes of Merck (US:MRK), Pfizer and Bristol-Myers Squibb (US:BMY) and went instead for smaller biotech companies – the likes of Royalty Pharma (US:RPRX), MorphoSys (DE:MOR) and Biohaven (US:BHVN) were all beneficiaries of Berkshire Hathaway investments. That reflects the decline in US biotech valuations over the past 12 months, which would give Berkshire greater average returns if its smaller company investments all break through with marketable products. Whether that strictly represents 'value' investing is a moot point and these companies are hardly brand names, so it would be no surprise if the ongoing market rout leads Buffett back to big cap pharma shares soon.