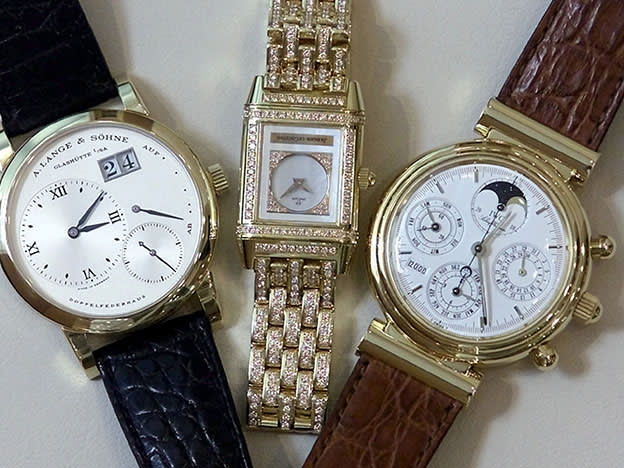 Time to look at Watches of Switzerland

A wealthy customer base, favourable pricing dynamics and a growth strategy should act as strong hedges amid a tough retail outlook

In the middle of a cost-of-living crisis that seems to be getting worse by the day, a lot of retailers look quite exposed. As their disposable incomes fall, consumers are tightening their belts and cutting back on spending. But one retail category, situated at the more exclusive end of the market, possesses a customer base and product range that should cope well amid the economic headwinds pounding the global economy.

That category is luxury watches. For those willing to drop a multiple of the average UK annual salary on a Girard-Perregaux, for example, it is unlikely that fluctuations in home energy costs or the weekly food shop are going to dissuade them from taking the plunge.

Watches of Switzerland (WOSG) is a key player in this space. The company is the UK leader with around 40 per cent of the luxury watch market and has over 170 stores across the UK and US with over 50 mono-brand boutiques in addition to its online presence. It trades under five brands including Goldsmiths in the UK and Mayors in the US. The company also sells luxury jewellery, though this made up just 12 per cent of sales in the latest quarter.

The stock has been volatile of late. Having soared to an all-time high of £16 at the end of 2021, the share price has almost halved amid a deteriorating economic backdrop and an indiscriminate pummelling of highly valued sectors. But with significant growth potential in the US and an impressive long-term plan to April 2026, the stock’s recent decline could very well represent an attractive entry point for investors looking for a solid long-term option in the luxury retail space.

After posting record sales and profits in its last financial year, Watches of Switzerland (WoS) entered the recent period of tumult from a position of strength. Recent evidence suggests this form has continued. In the nine months to January (the group’s financial year ends April), revenue was up 38 per cent. Even in the third quarter – a tougher comparator than the first half – luxury watch sales were up by a fifth, and demand consistently exceeded supply.

Investors can expect a fourth quarter update on 18 May, though the company has already confirmed that full-year trading is in line with expectations. Consensus forecasts are for sales of around £1.2bn for the year and £1.5bn for 2023, which would represent a 67 per cent leap in just two years. Not too shabby, although of course the update will confirm the fine print.

The fundamentals also look good. WoS posted a free cash flow conversion rate of 104 per cent in 2021, up from 66 per cent in the prior pandemic-struck period. Return on capital employed, meanwhile, was over 25 per cent in 2021 and Barclays expects this to hit 36 per cent in FY2022. Greater operational reach has also brought economies of scale: between 2017 and 2021, the gross margin edged up steadily from 8.6 to 13.3 per cent. While not mind-blowing, it all suggests the company knows how to expand sustainably.

The company’s strong revenue performance is underpinned by a favourable supply-demand relationship. Well over half of sales come from the “super high demand” Rolex, Patek Philippe, and Audemars Piguet brands, for which customer demand levels are significantly above existing stock.

This imbalance is one of the key reasons JPMorgan Mid-Cap Investment Trust (JMF) co-manager Katen Patel is bullish on the company. “Two-thirds of [the company’s] sales are derived from brands that have historically been supply constrained, operating with long waiting lists for an exclusive product, resulting in a much less price sensitive customer”, he told us.

The dynamic, which has been intensified by the pandemic and supply chain headwinds, means the company enjoys robust pricing power and has a very good idea of future revenue streams.

Long waiting lists could be viewed as an issue if they pushed customers to give up and spend their money on other things. But exclusivity confers its own value and is a big part of the reason why luxury buyers are prepared to pay up. WoS’ market leading position, and initiatives such as offering pre-owned watches for sale also mean any threat from impatient customers should be manageable.

Revenues are currently UK-dominated. In the latest financial year, the UK took 67 per cent of sales with the rest going to the US. That split is set to change. WoS recently announced its expansion into Europe, with the launch of six mono-brand boutiques later this year, but it is America where the prize could be most meaningful for shareholder profits. The company first penetrated the US watch market in 2017, and further expansion there could be transformational for future growth.

Indeed, Bank of America analysts think that consolidation potential in the US is the biggest opportunity for the company. The bank talks up a £2.7bn “blue-sky opportunity in the US” and thinks that it could claim a 10 per cent market share in the country by the end of this calendar year. The potential to soon replicate its level of dominance in the UK, reckons BoA, is underappreciated by the market.

The US watch market is underdeveloped and fragmented in comparison to the UK. Luxury watch sales are 40 per cent lower per capita and retailers have lower numbers of stores. Then again, US shop rents are typically lower, while the lack of scale competition means there are good opportunities available for the company to consolidate and take advantage of M&A options. As Bank of America points out, “the competition in the US is weak as often individual jewellers cannot invest as much as WoS”. Big market, weak competition, what’s not to like?

The company’s forecast of a compound annual growth rate of 25 to 30 per cent for US revenue to 2026 certainly suggests they are optimistic, and that things are already moving in the right direction. Within four years, management expects UK and US revenues to be pretty much evenly split. If the company succeeds in that push, we wouldn’t rule out WoS itself becoming an M&A target.

A key concern facing all investors in retailers is the risk that brands take out the middleman and opt to sell direct to consumer (D2C). The luxury watch world hasn’t exactly embraced ecommerce, with many brands having extremely limited online capacity and some offering no online sales. Selling isn’t the sector’s forte.

But if the market transforms, could a shift in distribution ownership hurt WoS?

JP Morgan’s Patel is unconvinced that this represents a significant threat.

“The luxury Swiss watch market has a large wholesale distribution network and whilst there are examples of producers expanding into retail, this has typically been where the distribution partner has been executing poorly – not a category we would put WOSG in,” he argues.

Still, it is important to note that WoS’ online offering is gaining steam. Online sales were up by 121 per cent in 2021, assisted by the pandemic, and are forecast to continue to take a bigger slice of total sales in the years ahead. BoA expects online sales to reach 10 per cent of the whole by financial year 2027, which would help to mitigate concerns around digital risks.

Continuing with the potential downsides to the stock, some investors will likely view the valuation as a little too pricey, particularly given the risks attached to the quality of any earnings forecasts right now. Some analysts argue growth expectations are already baked into the rating.

The shares have indeed looked expensive at certain points – Barclays analysts, for example, had the shares trading at 28 times forward 2023 earnings in a February research note. After dropping to 16 times’ consensus earnings, the rating no longer looks excessive given the growth ahead. This valuation is below the five-year average of 20 times and is more in line with the consensus valuations of other luxury companies like Burberry (BRBY) at 14 times forward earnings and LVMH Moët Hennessy Louis Vuitton (FR:MC) at 19 times forward earnings.

On balance, and with little reason to bet against the lure of WoS’ high-end products, now looks like as good a time as any to buy in.