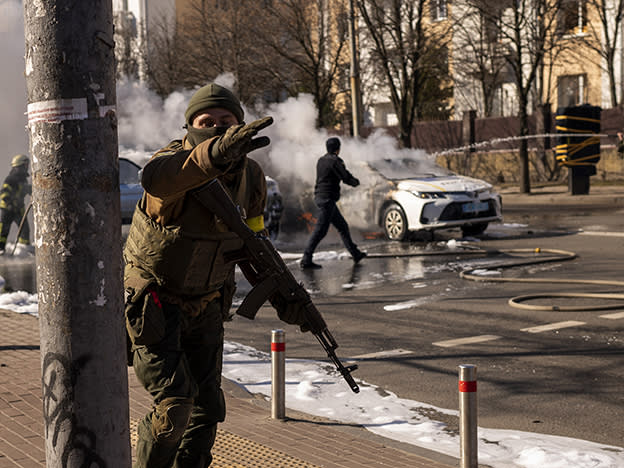 The war in Ukraine continues with Russia giving up on its initial aim of taking Kyiv and concentrating its forces on the eastern regions. Evidence of atrocities firmed the resolve of Western countries in their support of Ukraine. Western allies introduced further sanctions, and as I write, the European Union is still discussing a complete ban on Russian oil and its export to other countries using ships with any connections to EU citizens. Supply shortages due to war/sanctions and the reintroduction of Covid lockdowns in China increased commodity prices. Commodities from oil and gas to foodstuffs such as wheat to industrial metals such as nickel have hit multi-year highs. Inflation continued to move higher and last week the governor of the Bank of England warned of “apocalyptic” food prices.

The US Treasury 10-year yield ended April at 2.89 per cent, up from 2.3 per cent at the end of March. The yield has since moved over 3.0 per cent, but subsequently dropped back. The next level of note is 3.25 per cent, which it last reached in November 2018, when the Federal Reserve previously tried to reverse quantitative easing. Back then, quantitative tightening, in which it sells some of its reserves of bonds rather than buying, did not go down well at all. It had to quickly change course leading to a rapid recovery in equity markets. Many expect a repeat of that process in the coming months as economic growth stutters. The problem this time is inflation. Once there is evidence that it is peaking, maybe then the Federal Reserve will relax policy. That is what to look out for over the summer.

Rising bond yields have undermined the valuations of technology/growth stocks. The case for high valuations was based on the premise that subdued government bond yields lowered the rate at which one discounted future growth. One can't have it both ways, so the increase in bond yields has hurt valuations. Throw in some results that fell short of expectations (Netflix (US:NFLX), Amazon (US:AMZN), and Alphabet (US:GOOGL)), and the result is the Nasdaq has dropped 13.4 per cent on the month and 21.2 per cent this year. The S&P 500 fared slightly better, falling 8.8 per cent in April, while continental European markets did better. The Italian MIB was off 3.7 per cent, the German Dax 2.2 per cent and the French CAC 1.9 per cent. The UK continues to perform relatively well. The FTSE All-Share was up 0.3 per cent and at the time of writing was the only leading equity market to be up on the year, up 0.8 per cent. The All-Share's strength is all down to the FTSE 100 with its exposure to commodity and defensive companies: the FTSE 250 is down 11.8 per cent this year, and elsewhere the Aim market is down 16 per cent.

Brent oil was up just 0.6 per cent to $106 (£85) per barrel in the commodity space. Nickel was flat, but other metals struggled – copper fell 7 per cent and platinum gave up some of its own recent gains. These falls could be profit-taking after a strong run or an indication that whatever the longer-term attractions are, a recession would not be helpful for demand and prices in the short term.

Bitcoin had a difficult month, falling 15.3 per cent. It's now down 48 per cent from last November's high. As an investment to protect against falling equity and bond markets and rising inflation, gold, up 5 per cent this year, seems to be doing better. Perhaps bitcoin is no more immune to liquidity drying up in financial markets than equities and bonds. Or put another way, much of the rise over the last decade was down to ultra-loose monetary conditions.

My underexposure to large caps is still impacting my returns, with many of my smaller companies being sold off as liquidity dries up. It doesn't take much of a sell order to drive prices down when buyers are sitting on their hands.

The commodity sell-off in the last few days hurt. I warned about this last month, but it happened quickly. My two most significant positions, Blackrock World Mining (BRWM) and Serica Energy (SQZ), did the damage, falling 3.0 per cent and 11.8 per cent, respectively. The Global X Copper Miners ETF (COPX) was also off 7.1 per cent, giving up some recent gains.

Other heavy fallers were SDI Group (SDI), down 16.3 per cent, Baillie Gifford Shin Nippon (BGS), which fell 15.5 per cent, Supreme (SUP) down 15.3 per cent and Somero Enterprises (SOM) down 11.2 per cent. In Somero's case, the damage was not quite as bad as it looks. It went ex-two dividends amounting to around 7 per cent off the price. SDI Group and Baillie Gifford are my two smallest positions, having been reduced in December/January. Given their performance, I should have sold them completely, but I am where I am and will hang on with the view to adding to the positions in due course.

The Funds' Portfolio was down 3.1 per cent, a little better than the 3.4 per cent drop in the FTSE All-World. Year to date, the Funds' Portfolio is down 5.9 per cent, a little behind the -5.7 per cent return of the FTSE All-World GBP Index. The All-World $US Index was off 12.2 per cent in the first four months, with the dollar's strength (up 7.0 per cent against sterling) impacting the index's return. The one new fund bought for the Funds' Portfolio was the best performer – NextEnergy Solar Fund (NESF) was up 4.6 per cent. Blackrock Energy & Resources Income (BERI) gained 2.4 per cent. Apart from those two, all the other positions were down. The worst three were focused on smaller companies. As well as the 15.5 per cent fall in Baillie Gifford Shin Nippon, Blackrock Throgmorton (THRG) was off 13.3 per cent and Smithson (SSON) dropped 12.2 per cent.

I reduced my position in Lundin Energy (LUNE) on 8 and 19 April before eventually selling entirely on 25 April. It's been a good investment, realising total profits, including dividends, that added over 4 per cent to the value of the JIC Portfolio over the two years I owned it. The deal to sell its oil and gas operations to Aker BP should complete in the next few months. It will create a high-quality oil and gas industry company, but the valuation looks full to me. It is less sensitive to oil price moves due to the high (78 per cent) tax on oil revenue in Norway. That works both ways, but if one thinks that oil prices are likely to have another leg up, I believe there are better ways to take advantage of the move. More on that next month.

I added Next Energy Solar Fund to the Portfolio on 19 April. It operates 99 solar farms in the UK and Italy with an installed capacity of 865 MW at the end of 2021. It is adding new capacity and has hedged much of its future generation. It has forecast a 5 per cent uplift in its dividend in 2022 to 7.52p and earlier this month, in a Q1 update, it raised its net asset value by 8.7 per cent to 113.5p. My purchase price of 106p gives a dividend yield of 7.1 per cent. In a low-interest rate, high inflation environment, I think a yield of 7 per cent will attract attention. Hopefully, it will move up to previous highs of 125p, which would leave it on a still attractive 6 per cent yield. That would be a 25 per cent total return over a year if it does.

On 28 April, I added to Serica Energy (SQZ) following its results the week before. I added 1308 shares at 356p. I had previously sold the same number of shares at 397p, so this was a trading buy at what I thought was an overreaction to its 2021 results. Given the cash generation over the last year, I think some were disappointed that the board only increased the dividend from 3.5p to 9.0p. I believe the board is keeping its powder dry to grow the business through acquisition. I think the board deserves the benefit of the doubt given its track record so far, including the hugely accretive acquisitions of the BKR fields from BP and Total in November 2017.

Supreme posted an update for its March year-end. Results were broadly in line with expectations, but comments about cost pressures in its sports mutrition and wellness division hit sentiment. It says that as well as an increase in the price of whey protein, overheads, in general, will be higher due to increased wage and transportation costs. Analysts trimmed forecasts for the current year ending March 2023 by around 5 per cent. Four months into the year, SigmaRoc (SRC) said it had a strong start with organic growth up 6 per cent. It said that with a strong demand backdrop, it had been able to mitigate the headwinds created by volatile economic conditions.

Forecasts for 2022 remained unchanged and look cheap on 10.9x earnings. However, that might not afford the share price much protection should earnings forecasts fall due to slowing demand at the same time as energy prices are increasing.

Anglo Pacific posted a record Q1, its third consecutive record quarter. It is benefiting from higher commodity prices, particularly coking coal, and cobalt. It forecast its net debt would fall to $45m by the 30th of April. At its current cash generation rate, it should pay off its debt within the next few months. It is seeking acquisitions to reduce further its reliance on coking coal from its Kestrel Mine royalty stream.

Lloyds Banking Group (LLOY) posted solid Q1 results accompanied by an upbeat assessment of its full-year prospects. It "enhanced" its guidance for banking net interest margins and return on tangible equity. Finally, Sylvania Platinum (SLP) posted in-line results for its Q3 that ended on the 31st of March but was confident of a strong Q4 and achieving full-year guidance. Group cash balance had grown to $138m and should increase further by the 30 June year-end. It trades on only 6 times free cash flow. It has subsequently initiated a share buyback.

The Federal Reserve has increased rates by 0.5 per cent at its May meeting. It was the first time it raised rates by as much as 0.5 per cent since 2000. The equity market was initially relieved that the rumoured 0.75 per cent hike was just that, a rumour. The S&P 500 and Nasdaq rebounded strongly. It was short-lived and looked like another bear market rally. The bond market was not so confident, and the following day the US 10-Year Treasury moved decisively above 3 per cent as poor inflation numbers were published. The destination for US interest rates has not changed, just the path. In the UK, the Bank of England raised rates by just 0.25 per cent to 1.0 per cent and delivered it with a gloomy message from the governor: he now expects inflation to peak above 10 per cent and a recession in 2023. Sterling fell below 1.23 to the US dollar, which is not helpful in the fight against inflation.

There is evidence that consumer confidence and spending have tumbled in the UK since the start of the Ukraine war. A hike in household energy prices in April and higher inflation in essentials such as food, reduce the money available for discretionary spending. Conditions are becoming very difficult for companies, and it is no wonder that profit warnings are on the increase. EY says that Q1 2022 saw the highest number of warnings since Q2 2020 and that a record number cited increased costs. The median share price fall on a profit warning was 18.9 per cent. I think the next few quarters will see an increase in warnings as demand drops while cost pressures remain elevated. I believe there are four stages of a bear market: initial fear, real economic concerns (such as inflation), profit warnings/earnings failures, and finally, apathy as people give up and throw in the towel. I think we are in stage three, although there are occasional glimpses of stage four. It will be a difficult summer, but hopefully, it will build the foundations for the next bull market.