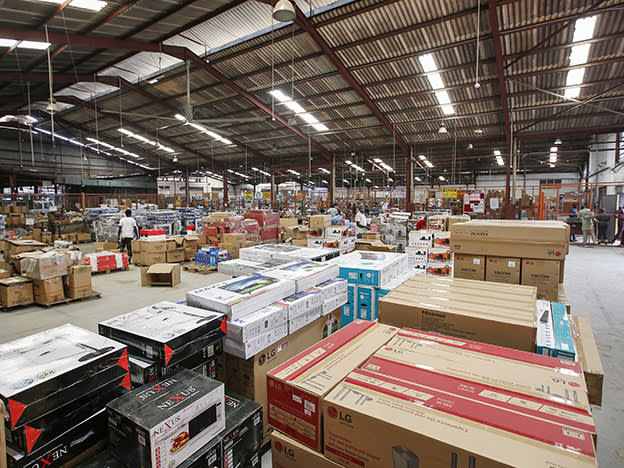 Not all warehouses – or ‘sheds’ – are the same. On the one hand, there are the cathedral-sized spaces that act as centralised hubs for businesses serving our insatiable desire for online shopping. On the other, you might find brewers of hoppy IPAs on business parks filled with other small warehouses.

The stock market does not appear to recognise this distinction, based on the 10 per cent drop in the share price of Industrials Reit (MLI) since 5 May. That was the day the real estate investment trust (Reit), along with several high-flying logistics landlords, began to sell off following a profit warning from Amazon (US:AMZN). Suddenly, investors feared the industrial market had become too dependent on the company specifically and ecommerce generally.

Investors are not entirely wrong about that. Amazon accounted for around a quarter of all newly leased warehouse space in both 2020 and 2021, which means its admission that it had overexpanded could signal a sharp drop in demand for the so-called ‘big box’ warehouses that both it and other large ecommerce businesses need. There are other reasons to be concerned about a shed bubble too – including record low yields, stories of viability assessments for speculative warehouse development being done on extremely bullish rental forecasts, and the possibility of a recession.

However, while all these concerns are valid, their effects on Industrials Reit are likely to be limited. This is in part because the group does not develop ‘big-box’ warehouses, which the industry tends to define as any shed larger than 100,000 sq ft. Rather, it buys smaller multi-let industrial (MLI, hence the ticker) units of 500 to 10,000 sq ft – and Amazon does not let a single one of them.

The big-box and MLI business models are not night and day, more like night and late afternoon. They share many of the same kinds of tenants, use some of the same property agents to negotiate deals and many industrial developers – including mega-Reit Segro (SGRO) – like to own and develop a bit of both.

The difference is the scale and the corresponding level of risk and reward. For years, big-box sheds have been snapped up and sold – either individually or as portfolios – to private equity firms, pension funds and various other sources of capital. Recent growth in the cash being thrown at big boxes has been nothing short of exponential. Savills calculates that UK-based investment in warehouses over 100,000 sq ft hit an all-time high of £6bn in 2020, eclipsing the previous record of £4.1bn set in 2014. In 2021, that record too was obliterated as big-box investment hit £10.42bn.

The MLI market has seen nothing like that level of growth, partly because the cost of building MLI units means speculative developers and the investors who might back them have to be more cautious. Julian Carey, managing director of Industrials Reit, says putting up a multi-let industrial unit can cost “well north” of £100 per sq ft, compared with around £60 per sq ft for a big box. The result is a market that – much like the big-box market – is undersupplied. Real estate adviser Gerald Eve calculates that 2021’s end-of-year void rates for MLI were at an all-time low. Yet, unlike the big-box market, MLI is more likely to remain undersupplied due to the relative difficulty in delivering space.

As with the big boxes, one of the key drivers of MLI demand is the UK’s growing preference for online shopping. Around 26 per cent of all retail spend is now online, according to the ONS, up from 19 per cent pre-pandemic.

Unlike big boxes, though, the MLI market has many other sources of growth. Small factories, trade counters run by the likes of Toolstation, craft breweries, dark kitchens for food delivery firms and even gyms are all examples of the diverse range of MLI tenants.

This mix of demand combined with a dearth of supply is driving up rents. Industrials Reit targets 4 to 5 per cent rental growth a year, which, if anything, may be conservative considering Gerald Eve recorded a 10 per cent surge in rents in 2021 in London and the south-east and 7 per cent growth in the rest of the UK. The group achieved 4.4 per cent like-for-like growth in its financial year to March, implying it can probably sweat its tenants a little more.

Yet, part of the reason Industrials Reit does not need to push its tenants as hard as some of its big-box peers is because it is not a developer in the traditional sense. Whereas the likes of Panattoni, Tritax Big Box (BBOX) and Prologis (US: PLD) make their money by buying sites on which they intend to develop and let big-box warehouses – known as speculative development – Industrials Reit buys existing MLI units which are underperforming relative to the market rent, spruces them up and lets them out to new tenants at a higher rent, ideally booking a nice value uplift in the process.

Once again, the difference is the level of risk and reward. The speculative big-box players stand to create more value by building a warehouse where there wasn’t one before, while Industrials Reit’s returns are more incremental because much of the value on the site was already created when the acquired unit was originally built. The flipside to this is that the big-box players stand to lose a lot more if they get it wrong – if rents fall short of (or construction costs rise above) their forecasts.

None of this means Industrials Reit's business model is without risk. Whereas big-box leases can extend to two decades, Carey says the average unexpired lease term in its portfolio is “around two-and a-bit years”. This could increase its exposure to recession risk, as shorter leases mean tenants can up and leave if their business is not working out. What’s more, while 3 per cent annual uplifts are written into most of its leases, inflation is often not – a bad sign if continuing high inflation cannot be offset by strong demand and rental growth.

To counter this, Carey and his team take an active approach – meaning investors are probably more reliant on their ability to meet tenants’ demands, keep spaces let and increase rents than landlords focused on long-term leases. In this sense, Industrial Reit has more in common with flexible office landlord Workspace Group (WKP) than its industrial peers. Where the two differ is in the nature and use of rented space. Unlike increasingly hybrid-friendly office work, a typical tenant on a short MLI unit lease cannot function without physical premises.

Though pre-tax profit fell in the year to the end of March 2020, it has rocketed in the two years since and still has plenty of scope to grow when you consider its addressable market. As of 31 March 2022, it owned £686mn-worth of MLI assets and Carey estimates that there is around £60bn in untapped potential in MLI assets around the UK.

If Carey is right, and he seems to have been so far, the shares’ small discount to current NAV looks harsh and current broker forecasts may need upgrading.