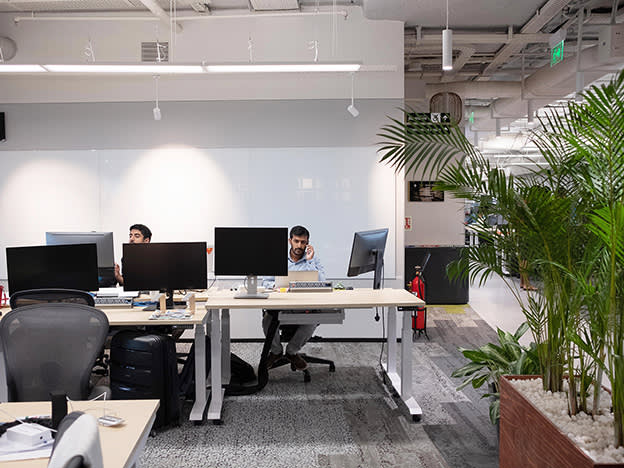 The extent to which habits necessitated by the pandemic remain once lockdown and social distancing restrictions are lifted is one of the major unknowns business owners are grappling with. As many office workers have decamped to the kitchen table to do their day jobs, there is a large question mark hanging over how many companies will make the move to remote working long-term and reduce their office footprint.

The ease of handing back flexible office space means providers like Workspace (WKP) have taken a more immediate hit to vacancy rates than others across the City of London and West-End markets. Like-for-like occupancy declined to just over 82 per cent by the end of December, a fall from almost 86 per cent three months earlier. That compares with vacancy rates in the City and West-End of 6 per cent and 8 per cent, respectively, according to data from Savills (SVS).

For Workspace, filling that empty space in the face of weaker demand has come at the expense of pricing. “Pricing came off this year partly because you’re pricing into almost a void at the moment,” according to chief executive Graham Clemett.

Average rent per square/foot reduced by just over 5 per cent during the third quarter, around half of which was driven by short-term incentives aimed at getting occupiers to sign-up. Mr Clemett expects the underlying decline in rents to come in at around 10 per cent this financial year.

Yet the prospect of weaker rents is not just one that Workspace - whose shares have been more severely punished by investors than traditional peers - faces. A net balance of -44 per cent of respondents to the latest Royal Institution of Chartered Surveyors (RICS) commercial property survey anticipated a fall in rents for UK prime office space, and a balance of -63 per cent foresaw a decline in secondary rents over the year to come. A negative net balance indicates more respondents are expecting a decline in rents that those who are not.

So could it be that the impact of weaker demand on rents is more delayed for the major UK-listed landlords? That office landlords across the board will have to take some pain on rent pricing in the near-term seems like a certainty. Not least because of the likely rise in occupiers going bust later this year, as government support is gradually withdrawn. The availability of leasable office space rose at the strongest rate since the global financial crisis, according to the RICS fourth quarter survey.

Yet there are reasons to tame the bearishness towards the office sector. For a start, a reduction in lending on speculative developments means the supply/demand balance is more in favour of landlords than in the aftermath of the 2008 financial crisis.

For Workspace in particular, the offer of a six-month break in the lease could be more appealing for businesses still determining the extent of their office space requirements and tentative about the strength of the economic recovery. The group’s shares have underperformed the broader UK real estate investment trust sector over the past 12 months and its shares trade at a 23 per cent discount to forecast NAV at the end of March.

So just as it seems churlish to abandon hope in the traditional office landlords, there is also space for Workspace’s shares to re-rate if the economic recovery plays out as hoped.