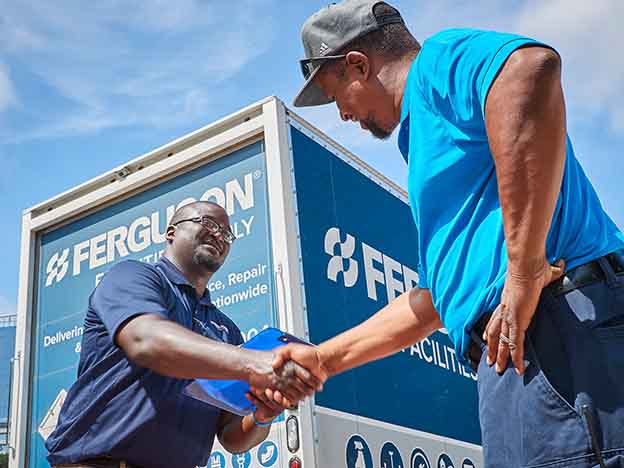 With balance sheets repaired, Polypipe (PLP) and Ferguson (FERG) aim to cash in on infrastructure spending both here and in the US.

There was a genuine sense of positive anticipation in the results for both US-focused plumbing supply company Ferguson, formerly Wolseley, and its industrial counterpart Polypipe, the latter of which will change its name to Genuit Group from April. The reason for the outbreak of optimism is that both companies have largely completed a process of restructuring and balance sheet repair and aim to benefit from the splurge on infrastructure spending that governments on both sides of the Atlantic have promised, though each has a slightly different emphasis.

The disposal of the Wolseley’s UK business for $442m (£320m) will fund a special dividend, and there is a share buyback program of $400m planned over the next 12 months. It also leaves Ferguson as a large North America-focused company supplying plumbing equipment to contractors in both the residential and industrial markets. Arguably, this leaves it better placed to benefit from the Biden administration’s proposed infrastructure spending plans. The details are sketchy but an infrastructure plan of up to £2 trillion – funded by potential tax increases on corporations – is proposed to update America’s clapped-out infrastructure which, given the Democrats’ control of Capitol Hill, should pass with a bit of horse trading.

Ferguson’s operational results largely floated on the back of a relatively robust residential market in the US. Revenues here grew by high single figures, and now account for 56 per cent of the US top-line. This offset the relative decline in civil and commercial demand, with delays in construction site completions largely to blame. Analysts anticipate full-year EPS of 404.8ȼ a share, flat on last year.

Polypipe finds itself in a similar situation to Ferguson in that, emerging from a period of consolidation and a balance sheet repair – gearing is now down to barely 5 per cent and the dividend has now been reinstated - it now must decide where the opportunities lie in the UK market.

The results showed that management’s approach to the problem rests on two key assumptions.

Firstly, the UK government will continue to support the housing market in some form, whether through Help-to-Buy or via continued extensions to the stamp duty holiday. This is important for Polypipe as it derives the greater part of its business from the early stages of construction – which is partly why profits suffered adversely from a 32.4 per cent fall in new housing starts last year. That saw underlying EPS more than halve to 13.3p, with a recovery to 25.8p expected this year.

Secondly, diversification into areas that can attract “green funding” in the UK that will grow quickly because of legislative demands for more efficient energy use in homes and business. Polypipe’s acquisition of Gloucester-based company Adey for £210m in February underlines the approach. Adey produces heat-saving products for construction customers. It also acquired underfloor heating company Nu-Heat for £27m, following up on the trend away from more energy intensive radiator systems. Polypipe is also keeping in step with the Zeitgeist by offering a product that circulates cool filtered air around classrooms. Other areas to note are increasing exports of water management products to areas with natural shortages of clean drinking water – with Polypipe seeing 30 per cent revenue growth in this specialist segment.

The market has not been slow in reappraising the prospects for both Polypipe and Ferguson. The share prices of both companies have recovered well over the past couple of months, as prospects mount for a return to “business as normal” this year.

There are cyclical factors that should help both companies maintain and expand their margins, though there are also risk that beyond their control. Will Congress approve a huge spending bill? Are the British government’s announcements on infrastructure spending merely the latest in a long line of press releases and subsequent inaction on the topic? There is no definitive answer, but the measures that the companies have taken to shore up their finances have a definite appeal for the year ahead. We retain our hold recommendations for both stocks. Hold.