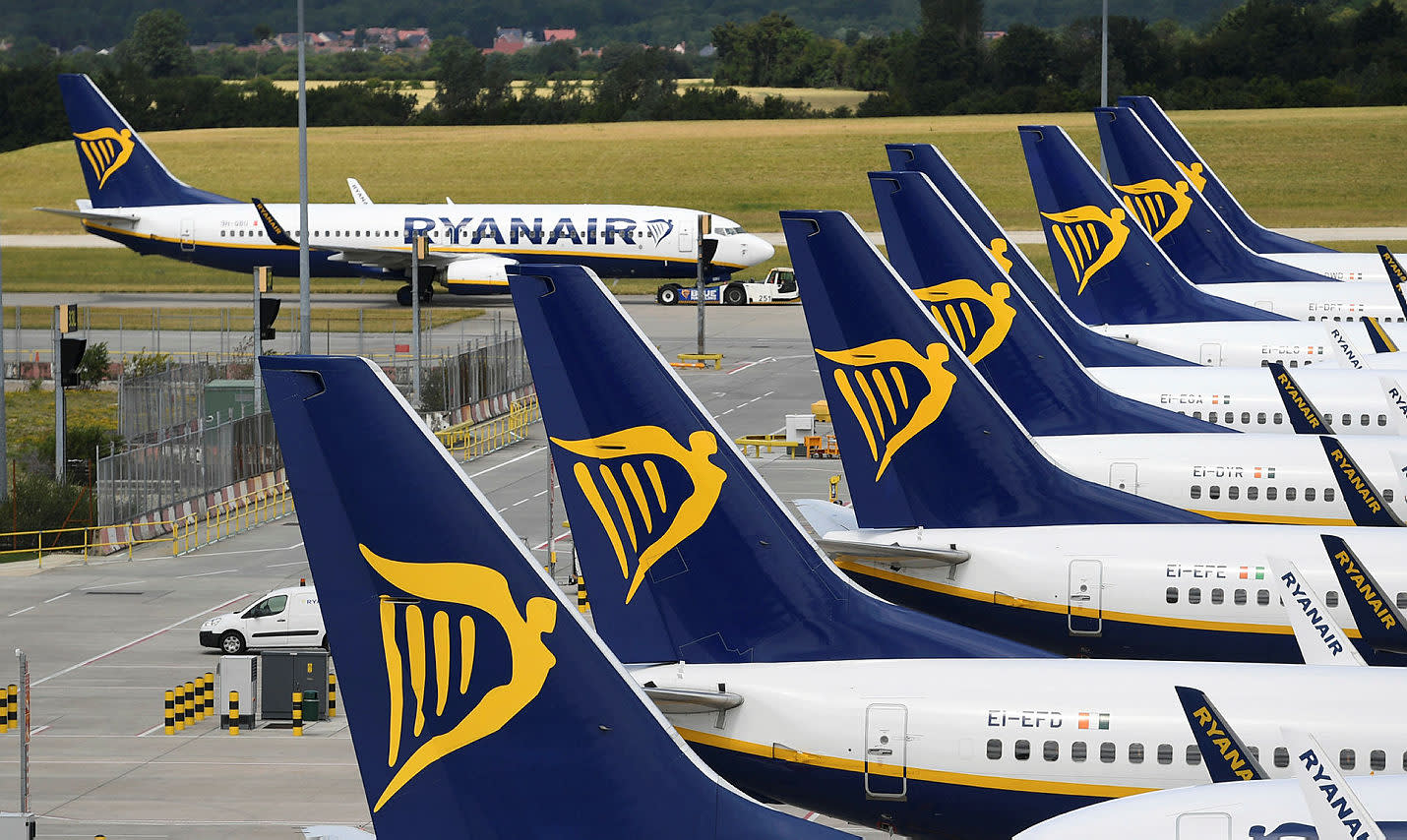 What do today's top business stories mean for your investments?

Let’s kick off the week with some positive vaccine news. The UK administered a record 844,285 Covid-19 jabs yesterday, which now means that more than half of the adult population has received at least one dose. But a return to normal is some way off yet, with Defence Secretary Ben Wallace telling the BBC that an extension to the ban on foreign holidays cannot be ruled out, as concerns over the spread of new variants grow. The government’s current plan points to 17 May as the date that people in England can holiday abroad. Airlines and travel stocks have therefore unsurprisingly had a tough start to the week.

Airlines have had a healthy run in recent months due to hopes that the summer season would be fine – increasingly it seems international travel is going to be badly affected this year despite the vaccine success.

Meanwhile, sceptics of the AstraZeneca (AZN: Buy, Feb 2020) vaccine have been handed another blow as a late-stage US trial of the AstraZeneca/Oxford vaccine for Covid-19 has demonstrated 79 per cent efficacy at preventing symptomatic disease. Perhaps more importantly given the current vaccine narrative, the study identified “no safety concerns related to the vaccine” and importantly “no increased risk of thrombosis” or blood clots.

EU leaders have been forced to backtrack on their safety concerns after further analysis by European regulators found no evidence that the jab elevates the risk of blood clots.

But now the narrative has changed. Rather than question the safety of the Astra vaccine, the EU has begun to create noise around its manufacturing. Large volumes of the vaccine are created in a Dutch factory and exported to the UK so that Astra can honour its contract with its domestic market (the company must supply to the UK first), but EU officials have now threatened to “reflect whether exports to countries who have higher vaccination rates than us are still proportionate". A delay in deliveries from the EU would cause problems for the UK’s vaccine roll-out. Roughly 2m doses are produced weekly from the Oxford Biomedica facility, but that is not enough to satisfy the pace at which Brits are being vaccinated.

But before dishing out threats, the EU should perhaps be wary of its own reliance on British manufacturers. The lipid casing that is crucial in the manufacture of the Pfizer and Moderna vaccines is made in a factory in Northern England.

The question of whether AstraZeneca is a victim if vaccine nationalisation has an increasingly obvious answer. The company’s management will hope that the US - where they now intent to submit trial results to medicines regulators - proves a less turbulent market.

Investment platform giant Hargreaves Lansdown (HL: Buy, Feb 2021) has been dragged into the legal fallout from the collapse of fund manager Neil Woodford’s empire in 2019.

Hargreaves has received a pre-action letter from lawyers acting for class-action litigation group RGL Management, which is pursuing several claims on behalf of thousands of investors who suffered losses from the collapse of the Woodford Equity Income Fund (WEIF), including action against the fund’s authorised corporate director, Link Fund Solutions.

A separate class action brought by Harcus Parker and Leigh Day has targeted Link but avoids the investment giant.

RGL alleges Hargreaves failed to provide investors with “accurate, adequate and up-to-date information” about the funds prior to the suspension. On a website set up to draw in claims from investors, the group suggests the investment platform “knew of liquidity issues in the WEIF from November 2017” and that there remain unanswered questions as to why it continued to recommend the fund in its Wealth 50 ‘best-buy’ list.

Shares in Hargreaves dropped 2.4 per cent this morning after news of the pre-action letter was reported over the weekend. A spokesperson for the group declined to comment. AN

Further Reading:  What can we learn from the Woodford scandal?

The pound is back in favour. Sterling’s trade-weighted index (TWI) has risen to its highest level since just before the vote to leave the EU in 2016. But according to Chris Dillow, "this has mixed blessings for equities".

China is starting to test digital currency in Beijing and the financial centres of Shanghai and Shenzhen. Most central banks have approached solutions based on blockchain with caution - but China is emerging as the global leader in moves towards implementing Central Bank Digital Currencies (CBDCs).

Do the benefits outweigh the concerns - including the fact that blockchain technology is nicely suited to Chinese government tracking and the potential removal of civil liberties? And what does this mean for the fast paced emergence of e-commerce solutions from the east?

James Norrington examines the ‘power play’ in this article.

Shares in Visa (V: Buy, Jan 2021) closed 6 per cent lower at the end of last week, after The Wall Street Journal reported that the US Department of Justice is investigating whether the company is engaging in anti-competitive practises in the debit-card market. The department is reportedly investigating possible restrictions on merchants’ ability to complete debit-card transactions through networks that are often less expensive. But the possibility of tighter regulation will not come as a complete surprise, given Visa’s indisputable dominance in payments infrastructure. Alex Newman explains why the company is one of our ideas of the year.

Food delivery app Deliveroo is targeting a valuation of between £7.6bn and £8.8bn, as it moves closer to its market debut in London. The tech company set a price range of 390p to 460p, and said that the offer will consist of 384m shares, excluding an over-allotment option. The news came alongside a trading update that revealed that the total value of transactions processed on its platforms had more than doubled year-on-year in January and February 2021 - although no word on whether it was able to make a profit in those months, after it logged a £221m operating loss in 2020. Its prospectus will be published later today, which may shed some more light on the matter.

Legal services group Knights (KGH: Buy, Jul 2020) has struck an agreement to acquire full-service independent law firm Mundays for £5.3m. This comprises an initial consideration of £3.9m – made up of £2.7m in cash and the rest in new shares – followed by a deferred cash payment of £1.4m to be paid over the next two years. The deal is expected to complete on 16 April.

In line with Knights’ strategy to focus on the fragmented legal landscape outside of London, Mundays will strengthen the group’s presence in South East England and bring 34 fee earners into the fold. Mundays is said to have a strong corporate, real estate and private client offering and Knights anticipates that the acquisition will provide an immediate boost to earnings.

Analysts are similarly optimistic and have bumped up their forecasts. House broker Numis now anticipates an adjusted pre-tax profit of £22.9m for the year to 30 April 2022, versus £22.3m previously. Knights’ shares are up 3 per cent in early trading at 447p. NK

Centamin (CEY: Buy, Dec 2020) proved the benefits and shortcomings of buying gold miners over gold in 2020, handing shareholders back over $100m but also trading at half the market capitalisation it had in September, when gold was at $2,000 (£1,443) an ounce (oz).

The Egyptian miner saw its cash profits climb 54 per cent in 2020 thanks to the one-quarter higher realised price for gold for the year. The company will pay a 3¢ final dividend, compared to the 6¢ final payout for 2019 that became a first interim 2020 dividend due to Covid-19 uncertainty. A similar payout level, of just over $100m, is expected for 2021 as well.

The weak share price is related to the decision to stop production in one area of the Sukari mine’s pit last year because of safety concerns. This meant production was 6 per cent lower than the year before, at 452,320oz.

Centamin clearly needs another mine, given the regular production hiccups at Sukari. It says another discovery on the same site could be a possibility, while its holdings in West Africa have promise too. A new exploration team is a sign the company is taking this seriously. AH

Kingfisher (KGF: Buy, Mar 2021)  rose over 3 per cent following another strong set of results as consumers continue to focus on DIY during lockdown. Sales rose 7 per cent in the year to January, while adjusted profits were +44 per cent higher. This was a very strong performance across both the UK & Ireland and France. However, management warns that sales growth will slow this year. NW

Get ahead of the week with our economics and companies calendar

Tuesday: The world has been keen on surveys this year: how many people want lockdown to lift; what proportion of the UK enjoyed Tiger King; how do you feel about track and trace? On Tuesday we will find out how much YouGov (YOU: Buy, Jan 2021) has benefited from this.

We will also get unemployment numbers - a key insight to the UK’s inflation fears.

Wednesday: Chris Dillow is concerned that the post-lockdown boom in consumer spending won’t lead to a long-lasting self-sustaining recovery. We’ll be able to assess current spending on Wednesday’s CPI numbers.

Thursday: A trading update from catering business Compass (CPG: Hold, Dec 2020) is unlikely to bring much joy to investors on Thursday. But the outlook for the company as the UK emerges from lockdown is looking up. But to what extent is the company reliant on the vaccine roll-out and fast return to normality?