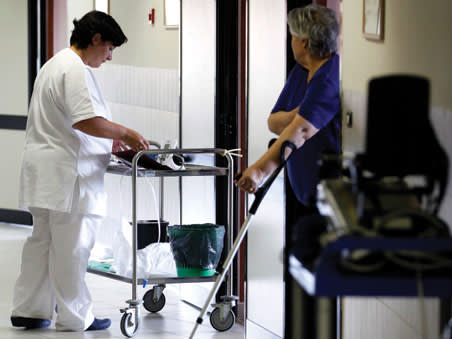 Various pharma companies have updated in the last week, shining a light on inflammatory conditions

Vaccines, testing and treatment. Three words that have dominated public discourse over the past 15 months as scientists and governments work hand in glove to tackle Covid-19.

Signalling continued success on its inoculation strategy, Westminster revealed last weekend that more than 50m jabs have now been administered across the UK. More than 34m people have received at least one protective shot. At the same time, the government has made rapid virus tests widely available.

Yet mass immunisation and accessible diagnostics mark just one step on the path out of lockdown. The easing of restrictions has sprung new, difficult questions about travel, quarantine and the threat of imported variants from overseas – with politicians attempting to strike a balance between reviving the economy and stemming the spread of infection. Inevitably, but understandably, coronavirus continues to top the healthcare news agenda.

All the while, a pharmaceutical world rumbles on quite apart from the pandemic. Indeed, a relative lack of attention has not detracted from the pervasiveness and severity of other diseases affecting millions of people across the globe every day.

And among those illnesses sit autoimmune conditions, which have been brought to the fore in recent days by a flurry of earnings reports on both side of the Atlantic.

Autoimmune disorders occur when the immune system overreacts or attacks its own component parts by accident, triggering inflammatory responses in the form of ailments ranging from rheumatoid arthritis to ulcerative colitis and psoriasis.

Such conditions are both highly prevalent and typically long term in nature, giving rise to a huge ‘immunology’ universe estimated to be worth $80bn (£58bn).

A biologic therapy, meaning it is made from proteins and other substances produced by the body, Humira is used to treat numerous immune-mediated diseases from Crohn’s disease to paediatric uveitis – an inflammation of the middle layer of the eye.

But as the latest numbers from AbbVie showed once more, with great sales come the great risk of undercutting. Such is the life of a pharma company – particularly one with such a hot product in a booming treatment area. Patents only last so long and when they expire, rivals are able to offer up biosimilars (therapeutics that are highly similar to existing approved drugs) with a cheaper price tag.

For the first quarter of 2021, AbbVie’s worldwide Humira net revenues edged up 3.5 per cent to $4.9bn. However, that slight improvement masked mixed trading in different geographies, in line with the regional pattern of AbbVie’s loss of exclusivity.

Reflecting the negative effects of biosimilar competition, Humira sales dropped 8.3 per cent to $960m in AbbVie’s international markets. Helping to mitigate that decline, US Humira revenues rose 6.9 per cent to $3.9bn. However, the same pressures are due to erode domestic sales of Humira from 2023 onwards.

AbbVie isn’t alone as a big pharma immunology specialist with a patent problem. Johnson & Johnson (US:JnJ), which posted first-quarter numbers on 30 April, must also now face up to the threat of rival generics. Admittedly, the group’s revenues are diversified across several specialist areas from contact lenses to cancer drugs, but immunology constitutes its main pharmaceutical segment.

America’s medicines regulator cleared the first biosimilar version of J&J’s immunology drug Remicade – one of its highest-selling products – in the US in 2016, driving a reduction in the group’s sales. Another immunology drug, Stelara, will also suffer in due course from patent expirations.

For the three months ending 31 March, worldwide Remicade sales fell more than a fifth to $777m. Meanwhile, Stelara, which has been approved for use in various immune-mediated illnesses, enjoyed sales growth of 18.1 per cent to $2.1bn.

But good times never last and both AbbVie and J&J have beefed up their research and development (R&D) pipelines with a view to replacing lost revenues. Such investment is vital to both companies maintaining their dominant positions in the immunology arena, as they coexist with newer non-trademarked entrants.

Moreover, it’s not just biosimilar competition nipping at the ankles of these companies. Other healthcare giants including Pfizer (US:PFE) and Novartis (SWX:NOVN) also have a hat in the immunology ring.

Pfizer, which has more often been associated with Covid-19 vaccines than anything else over the past year, posted 9 per cent growth in first-quarter ‘inflammation and immunology’ sales to $1.1bn when it reported on 5 May. That figure represented 7.3 per cent of the group’s overall revenues.

At Switzerland-based Novartis, meanwhile, immunology, hepatology and dermatology sales also came in at $1.1bn after an 11 per cent year-on-year improvement, taking this segment to 11 per cent of the top line.

The sheer range of companies involved in the immunology landscape is indicative of the size of the opportunity at hand.

To that end, AbbVie has taken new drugs to market in the form of Skyrizi and Rinvoq. In the first quarter these brought in first-quarter net revenues of $574m, up 91 per cent year on year, and $303m, up more than 250 per cent, respectively.

Such diversification is crucial in an increasingly saturated market. Investors may, then, also take comfort in the fact that operations at both AbbVie and J&J are broad based and well established beyond immunology. AbbVie’s $63bn takeover of Allergan last year brought it a new cash cow in the form of anti-wrinkle treatment Botox – also a product used for therapeutic purposes.

Allergan’s contribution and the group’s other existing pharma segments helped total first-quarter revenues to rise more than half to $13bn. In turn, AbbVie raised its full-year EPS guidance from a range of $6.69-$6.89 to $7.27-$7.47.

Meanwhile, helped by a recovery in the medical devices market after a blow during the early stages of the pandemic, J&J’s top line rose 7.9 per cent to $22.3bn. It also lifted guidance for adjusted sales growth to 9.3 per cent, from an earlier projection of 8-9.5 per cent – albeit that outlook excludes sales of its single-shot coronavirus vaccine, which contributed $100m in the respective three months.

J&J is currently selling said vaccine on a not-for-profit basis, meaning it is unlikely to make a significant difference to its bottom line. A FactSet survey of analysts puts EPS at $9.26 for 2021, giving J&J a forward price/earnings (PE) multiple of 18 times – considerably higher than AbbVie’s multiple of nine times, although the latter may reflect continued uncertainty about waning Humira sales and the integration of Allergan.

The scale and breadth of these pharma giants are central to their ability to regenerate their medicine cabinets to remain competitive.

But the immunology wave has visited UK shores, too, throwing up opportunities for smaller companies. Aim-traded C4X Discovery (C4XD) is a case in point.

The group, valued at just £93m on London’s junior market, describes itself as a “drug discovery engine delivering medicines in inflammatory diseases, oncology and neurodegeneration”. Just last month it unveiled an exclusive licensing deal with French pharma company Sanofi (FR:SAN) worth up to €414m (£358m) to develop and commercialise an oral therapy for the treatment of inflammatory diseases.

Through early-stage revenue-generating licensing deals, C4X garners returns on its pre-clinical assets, which it then reinvests into its portfolio. As such it has zero revenues. Still, in an indication of investor enthusiasm as well as partner interest, the group’s coffers were replenished by a £15m fund-raise last October and an “imminent” (as of 29 April) €7m upfront payment from Sanofi.