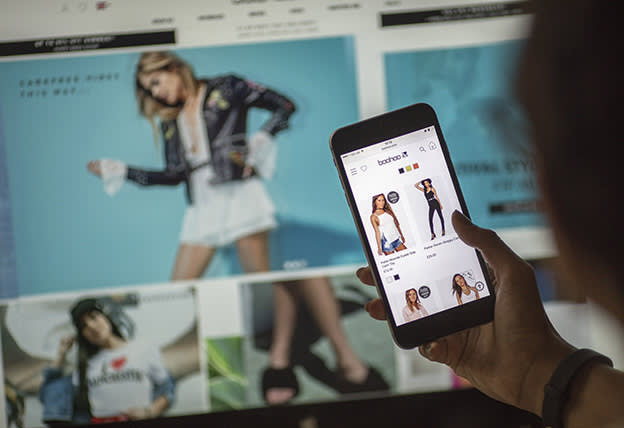 Fast-fashion retailer Boohoo (BOO) has been a big beneficiary of the pandemic-driven closure of the high street and consumers flocking online – its adjusted cash profits (Ebitda) jumped 37 per cent in the year to 28 February to £174m. There was a slight 0.2 percentage point contraction in the margin to 10 per cent, which reflects higher overseas distribution costs and investment in acquisitions.

The group's sales grew across all of its geographic regions, and the number of ‘active’ customers – those who have shopped on Boohoo’s website in the past 12 months – increased by 28 per cent to 18m.

The majority of Boohoo’s revenue comes from the UK, where sales rose to close to two-fifths to £945m. While traditional core categories such as dresses and ‘going out’ clothing experienced declines as people stayed at home, Boohoo responded by increasing its offering of activewear and loungewear.

Consumers’ enthusiasm for Boohoo’s wares was clearly undeterred by the controversy surrounding the group’s ESG credentials. Once a market darling, the shares tumbled last summer after a report in The Sunday Times alleged poor working conditions in Boohoo’s Leicester supply chain. This prompted third-party platforms such as Asos (ASC) and Zalando (DE:ZAL) to remove Boohoo products from their websites, and Standard Life Aberdeen (SLA) to sell the bulk of its holdings in the company.

Boohoo accepted all of the recommendations of an independent review of its UK supply chain, which identified “many failings”. The group is investing over £10m in supply chain monitoring and compliance measures, and former judge Sir Brian Leveson is overseeing an ‘Agenda for Change’ programme that has seen it sever ties with suppliers who were “unable or unwilling to demonstrate the required level of transparency”.

As it looks to move past this scandal, Boohoo is investing in future growth. Having raised £196m from a placing last May to help fund M&A, it spent over £250m on acquisitions last year. The group has been capitalising on the struggles of high-street retailers, purchasing Debenhams’ online business for £55m, and snapping up the brands and inventory of Dorothy Perkins, Wallis and Burton from the remnants of the fallen Arcadia empire for £25m.

Despite this spending, Boohoo has increased its net cash position (excluding lease liabilities) by 15 per cent to £276m, and it also has no long- or short-term borrowings.

Trading in the first few weeks of the current financial year has been described as “encouraging”, although the group remains cautious about an uncertain economic outlook. It is guiding that full-year revenue will rise by a quarter – in line with its medium-term target – with newly acquired businesses comprising five percentage points of this growth.

The fact that sales momentum will slow this year was likely behind the 3 per cent dip in Boohoo’s share price, but 25 per cent growth is still nothing to be scoffed at. Lingering ethical concerns and a lofty forward price/earnings multiple of 30 keep us from upgrading our rating, but Boohoo looks set to continue as an e-commerce fashion winner. Hold.