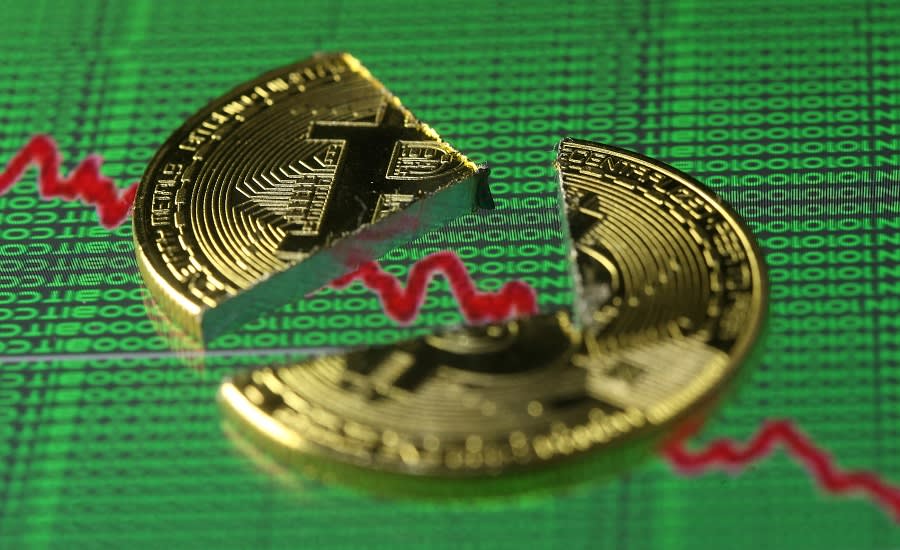 In the last two weeks every aspect of the crypto asset debate has been packed into a dramatic flow of news, which has led to a spectacular sell-off. The Chinese government’s latest edict against bitcoin came hot on the heels of Tesla (TSLA) announcing it no longer planned to accept the currency as payment for electric vehicles, citing environmental concerns.

Wednesday’s crash in the prices of bitcoin, Ethereum and many ‘altcoins’ represents a true test of faith for the crypto believers who bought in on the bull market. Yet long-term investors shouldn’t panic. This type of event was always on the cards and is the reason why position management and “never investing more than you can afford to lose” should always be mantras for volatile assets.

Those who have bought coins to hold, because they believe they have value underpinned by real-world uses and trends, are getting a timely reminder why such strategies are known as hold-on-for-dear-life (hodl) in the crypto space.

Sub-plots are intriguing for crypto adoption

Meme coins are a family of tokens that have sprung up almost as a joke and seek to monetise the craze of funny pet animations online. In a marketing stunt aimed at taking advantage of Buterin’s credibility and celebrity status, people have launched tokens and deposited them in his wallet on the blockchain, which is an open ledger of the transaction.

The idea is that speculators will see a billionaire blockchain pioneer holding coins, assume they’re the next big thing and pile in. To his credit, Buterin has sniffed at some of the peddlers of these meme coins and donated the deposits gifted him to charities, including India’s Covid-19 relief fund (first reported in City AM).

While the $1.2bn (£0.85bn) stated value of Buterin’s wallet was slashed by the very act of him dumping the coins and the liquidity crunch as demand slumped, the value of the donation was likely still worth millions of dollars. Buterin cemented his noble act by making a fiat cash gift to the charities.

There is another aspect, however. Some crypto chat boards have opined that it’s a cute move by Buterin to soften the stance of the Indian government, which has been hostile to crypto.

Decentralised finance (DeFi) is one of the prizes of the next generation internet heralded by blockchain technology. Central banks and policymakers, it goes without saying, jealously guard their control of the financial system, hence the frosty attitude towards crypto adoption. China is leading the world in trying to wrestle control. Its e-renminbi will be the first major central bank digital currency (CBDC).

The People’s Bank of China (PBoC) and the government coming out strongly against bitcoin is a statement that the Communist Party has no intention of being disrupted by technology. Western regulators have made similar noises about protocols and coins. The Bank of England and the Financial Conduct Authority (FCA) have repeatedly warned about volatility and the possibility of positions being wiped out entirely – something inexperienced investors must now be worried about.

Do ‘whales’ thrive in the panic?

Bitcoin’s recovery back above $35,000 on Wednesday afternoon (BST) could be the sign of some big traders or ‘whales’ moving back in and buying the dip to build their positions. That’s the word on twitter at the time of writing and could easily prove wrong if there is more selling – but what of the long-term impact of this setback?

What it may do is bring greater calls for oversight, which will seriously affect how nascent blockchain protocols and certainly the idea of DeFi develops. The conversation was already in progress about regulating crypto as it became more mainstream.

In this he favours the subtle approach of the European Union’s Markets in Crypto Assets (MiCA) directive.

“It is a big step forward to make the assets more usable and stable”, says Zabulis. “First of all, banks will be able to work with a compliant crypto sector – something that currently is more of an exception than a rule.”

Market crashes, as we have seen, will only heighten the calls worldwide for greater controls as more institutional investors have money tied up in crypto assets. That’s heresy for blockchain purists and casts doubts about how decentralised DeFi will actually be.

Still, if you’re holding the right coins and can hodl through this turmoil, the future remains potentially very exciting.