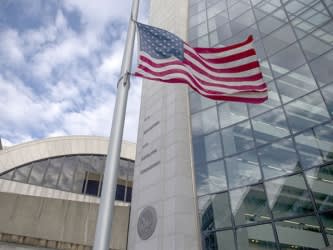 The Trader: Was it all that hawkish? Markets recovering poise after Fed meeting

European stocks fell slightly in early trade Thursday, following Asia (ex-China) and the US into the red after the Federal Reserve signalled it thinks rates will rise a year earlier than previously forecast. Bonds fell, with US 10yr yields up to 1.59 per cent before easing back a touch to 1.56 per cent this morning, and the 2yr hitting its highest in a year. The dollar rallied on expectations of tighter US monetary policy, with sterling back under $1.40 and the euro under $1.20. Gold is weaker amid the strong USD, higher yield picture. Oil remains bid after another bullish inventory report.

The Fed’s much-maligned dot plot signalled policymakers believe there will be two rate hikes by the end of 2023, vs the previous zero moves until 2024. The interest rate on excess reserves was raised by 5bps – worries about inflation perhaps.  It’s a technical move, but it points to the direction of travel: tighter not looser. The forecasts for this year were a lot punchier – 7 per cent GDP growth and 3 per cent core inflation. The market took all this as unvarnished hawkish – certainly it paves the way for an Aug/Sep taper announcement. Powell also dialled back the transitory language around inflation.