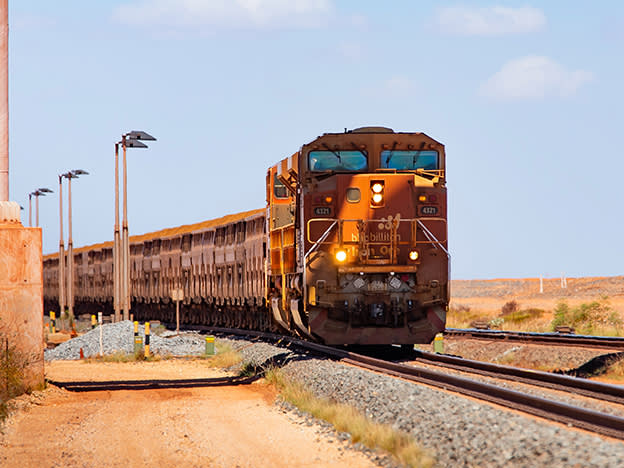 Miners still reaping the rewards but ‘volatility’ on the way

A barnstorming year thanks to record metals prices looks like it could be coming to an end, although there are still plenty of dividends to come

In the past year, the top 25 miners around the world have seen their market capitalisations increase by a remarkable four-fifths. The best performers were Freeport-MacMoRan (US:FCX) and Ganfeng Lithium, while BHP (BHP) and Rio Tinto’s (RIO) one-third growth in share price in the past year is equal to the FTSE 100, of which they are key components.

Rio and Brazilian major Vale (Bra:VALE5) have both leapt into the $100bn (£73.5bn) club, as well, after flirting with it after the market turned bear to bull in 2016, and the big miners have paid out billions in distributions to shareholders.

Record iron ore prices have driven this recent run, as Chinese demand for steel and supply limitations in Brazil and Australia pushed iron ore to well over $200 a tonne (t).

But China is trying to push down raw materials prices and more iron ore supply is on the horizon, so there is a question of what is coming next. The second part of the S&P Global top 25 companies analysis is that growth has slowed or reversed for most of the world’s major mining companies after a May peak in share prices.

Iron ore itself will likely come down in the second half. Demand is “starting to show signs of a slowdown” in China, said RBC Capital Markets analyst Tyler Broda. Supply will also grow in the second half, although Covid-19 could still hit Vale’s production in Brazil. Further out, a “finely balanced market in 2022” will make for “very volatile” pricing, Broda said.

Liberum sees iron ore falling back to a $110/t average price in the December quarter, half the record high earlier this year.

Wild weather hit Rio and BHP’s iron ore production in West Australia's Pilbara region in the first half, as well as some mine-specific issues like lower grades at Rio Tinto’s Greater Brockman hub and shortages of workers.

Rio’s June quarter production was down 9 per cent on last year, while BHP missed RBC’s forecast for the same period, producing 65m tonnes (mt) against the 67mt analyst Tyler Broda had predicted. Over the half, it was a 3 per cent drop to 154.1mt. These figures were enough to reach a new production record, however, for the year.

Rio’s full-year production, on the other hand, will likely be at the lower end of 325mt-340mt guidance, according to Bernstein analyst Bob Brackett. Rio will announce its interim results on 28 July and BHP its full-year numbers on 17 August.

Despite some production headaches in the first half, including a drop in grade for Rio, when the first half (and full-year results in BHP’s case) profit and dividend announcements come out there will likely be plenty in them for investors given the strength of the iron ore price.

Liberum analyst Ben Davis said in a recent note Rio was at risk from a heavy iron ore price drop given four-fifths of its cash profit comes from the commodity. The miner also has key copper and aluminium operations, although these would not pick up the slack in the case of a big dip in iron ore prices, even with copper hitting new highs around $10,000/t this year.

There are questions over the sustainability of this price level as well, and the red metal has already settled around $9,300/t after another intervention by the Chinese government to cut prices. This is still well above the c.$6,000/t level seen between between 2016 and mid-2020, however.

Rio is in the middle of a protracted underground expansion of the Oyu Tolgoi mine in Mongolia, which had its budget and completion date pushed back last year. The company said Covid-19 had slowed progress further, with worker levels at the site “25 per cent of planned requirements”, and that there was no progress on major works including shafts and “very little” progress on the decline, which provides access to the mine.

Anglo American (AAL), another major with a broader range of products than Rio and BHP, reported first half production with a 3 per cent beat on consensus estimates for copper, at 170,000t, while its iron ore and metallurgical coal divisions came 3 per cent and 14 per cent under consensus forecasts respectively. It will publish its profit numbers on 29 July.

Anglo's platinum group metal division had a good first half, and higher prices means this should be a strong contributor to interim earnings despite the unrest in South Africa. Chief executive Mark Cutifani said this was with operations running at 95 per cent of normal capacity due to Covid-19 conditions.