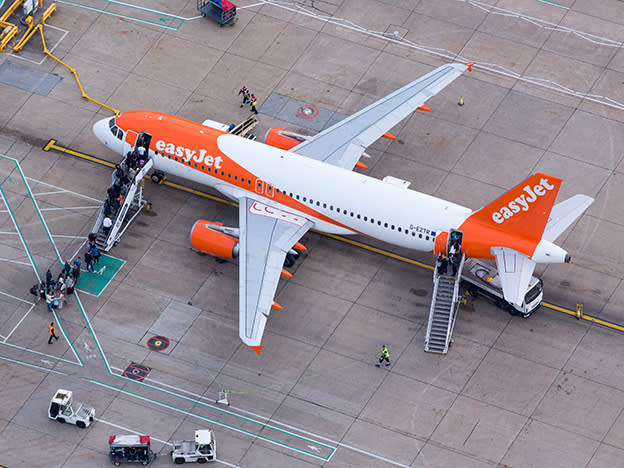 EasyJet goes to shareholders for more cash after rebuffing takeover

Budget airline looking to raise £1.2bn in an underwritten rights issue, at a discount of over a third on its previous closing price, while industry consolidation interest ramps up

EasyJet (EZJ) shareholders put it on the red list on Thursday morning after the airline announced it had landed itself a post-pandemic war chest, with a plan to raise £1.2bn in a rights issue. This knocked a tenth off its share price on Thursday morning.

EasyJet is offering shareholders 31 new shares for every 47 already held, at a price of 410p. This is a discount of over a third on the previous closing price. Investors who do not subscribe will see their holdings diluted by almost 40 per cent.

The airline also flagged an all-share takeover approach, which it had rebuffed on the basis it “fundamentally undervalued” the company with a non-cash, “highly conditional” offer. The Financial Times reported this was from Wizz Air (WIZZ), a fellow discount airline that focuses more on central and Eastern European routes, although the companies did not confirm this.

The rights issue will protect it against further Covid-19 restrictions, EasyJet said, and allow for investment in the “considerable long-term strategic and investment opportunities” that could come from the post-pandemic industry landscape.

Former RSA Insurance chief executive Stephen Hester, who left after the company was taken over by Tryg and Intact, has just taken on the role of chair. He has also a history of operating in tough times: he took the chief executive role at the Royal Bank of Scotland in 2008 and ran it though the post-bailout period.

EasyJet has struggled like all airlines under Covid-19 restrictions, although it said UK domestic capacity had reached above August 2019 levels last month. EU capacity is still below two years ago, at 81 per cent. Load factor, or the percentage of seats sold, was 82 per cent in the UK and 85 per cent in the EU in August.

Alongside the fundraise, the airline outlined its fleet and operational plans as travel reopens. The already slimmer fleet (down from 331 planes two years ago to 307 at the end of this month) was achieved by handing back leased planes and delaying deliveries out to 2027 and 2028 of 29 planes previously set to arrive by the end of September 2022.

This contributed to a £1bn drop in "near-term projected" capital spending.

Discount airlines are taking a range of approaches to the Covid-19 scenario.

UK budget airline Jet2 (JET2) agreed a deal to buy 36 new Airbus A321 neo aircraft at “significant discounts” to the official list price of $4.9 billion. It also has an option to extend the order to 60 planes, at a list price of $8.1bn. The narrowbody planes will be used to grow its leisure travel business and refresh its existing fleet, the company said. Delivery will be staggered over five years until the end of 2028.

There is also a new entrant in the European market. US airline JetBlue (US:JBLU) - known for service-focused but cheap flights - has just opened a New York-London route, and Norse Atlantic Airways (Nor:NORSE) has taken on Norwegian Air's long-haul business, and plans to start operating next year.

Norwegian Air chief executive Geir Karlsen said last month it had taken out more than two-thirds of its fleet and cancelled orders for 185 aircraft as it continues to restructure a business that was forced into bankruptcy last year.

The low-cost airline has exited the long haul business and reduced headcount by more than 6,000 as part of an overhaul that has seen it cut about 140 billion Norwegian krone (£11.7bn) of debt, liabilities and other commitments. It now has just 51 short-haul aircraft, 32 of which were in use in the first half of the year. Revenue for the first six months of 2021 fell 92 per cent to 590.8 million krone as passenger numbers dropped by 89 per cent to 590,000.