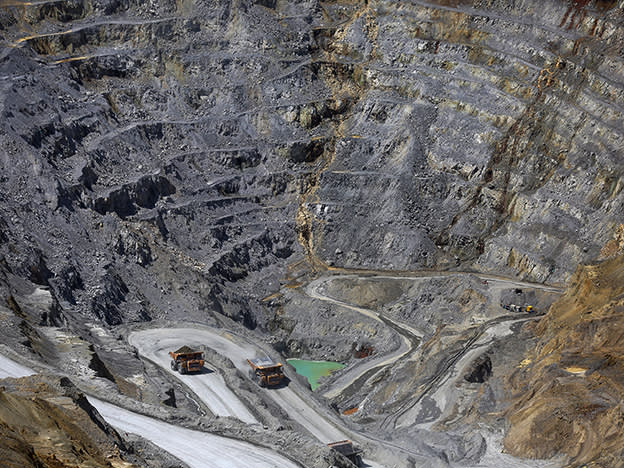 This low-cost miner’s next few years look smooth as anything. Going by FactSet consensus forecasts, Central Asia Metals (CAML) will see its free cash flow climb gently from $88m (£64m) this year to $112m in 2025. At the same time, management plans to revamp its Sasa mine in Macedonia while keeping one eye on more M&A. Base metals – which include the copper, zinc and lead that CAML sells – are in a bull market right now but deals are still on the table.

The company was built around mine waste dumps in Kazakhstan that still have plenty of copper in them and so has a history of finding value that others overlook. It has low debt, which it wants to pay off within a year, and strong cash flow thanks to the high copper price. In the September quarter, Kounrad in Kazakhstan hit a production record of 4,000 tonnes of the red metal. Even if the price drops off, CAML has legs. Buy. AH

Global seafood production has quadrupled over the past 50 years and the world now produces more seafood from aquaculture than through the wild catch. Given rising populations and increased consumption of animal protein, this represents both a problem and an opportunity.

It also underpins the investment case for Benchmark Holdings (BMK), a Yorkshire-based aquaculture genetics, health and nutrition specialist. All those business segments continue to recover from a pandemic-induced torpor, so much so that adjusted cash profits for FY2021, aided by first revenues from the group’s sea lice treatment – Ectosan®Vet – are predicted to outstrip market consensus of £15.9m, against £14.5m in the prior year.

Midway through the year, the group received marketing authorisation from the Norwegian Medicines Agency for the novel sea lice treatment, a development described by Benchmark as a “major milestone” – not surprising given that the problem costs salmon farmers more than $1bn annually, and c$600m in Norway alone. No shortage of sales headroom, then, given underlying market catalysts. Hold. MR

Atalaya Mining’s (ATYM) Riotinto copper mine – which dates back to Roman times or earlier and will soon be partly powered by solar energy – seems like an EU bureaucrat’s dream.

It can provide copper-hungry energy transition industries (and also less sexy ones that just need wiring and piping) with product not from China but southern Spain. There are downsides: Atalaya is a fairly high-cost outfit, with a cash cost per tonne of $2.15 per pound (lb) in the first half of 2021. The miner is unique in its ownership of a single, open pit copper mine of that size, but for comparison’s sake fellow London copper miner Antofagasta (ANTO) had a first-half gross cash cost (before credits that come from selling non-copper products) of $1.73/lb.

But with a cash profit margin of over 50 per cent in the first half, compared with 12 per cent a year ago, this is not proving a major obstacle to strong performance. Buy. AH

Like so many companies, Judges Scientific (JDG) had to contend with severe disruption to many of its end markets over the past 18 months. The implementation of travel restrictions and the cancellation of various scientific conferences have weighed on trading performance. Not surprising when you consider the group is engaged in the acquisition and development of scientific instrument businesses.

Perhaps that is a slightly misleading picture given that interim profits were up by 15 per cent, while order intake surpassed the previous record level. But conditions certainly haven’t been favourable for the group’s capital position, as it was forced to stockpile components and then there was the inevitable lag between order intake and cash flows.

These problems were probably unavoidable given wider disruption in the economy, but they are temporary effects, and management is seeing varying rates of recovery across different scientific disciplines. Liberum increased its 2021 profit expectations by 10 per cent on the back of the interim figures and chances of further upgrades are reflected in the lofty forward rating, even though the fog is yet to lift completely. Hold. MR

MP Evans (MPE) is one of the oldest companies on Aim, with a history stretching back to the 1870s. It began life as a tea and rubber broker, but moved into palm oil in the 1970s, which is where it makes most of its money today. Its operations are now largely focused on Indonesia, where it recently opened its fifth palm mill. The mills allow the company to more profitably convert the oil palm fruit on the seven plantations in which it has interests into palm oil. Construction work on a sixth mill is due to start by the end of this year.

Earlier this month, the company sold the last of its legacy sites in Malaysia but it retains a 40 per cent stake in Bertam Estate, the company that will develop it. Some of the 99.9m ringgit (£17.5m) proceeds will be invested in its Indonesian operations, but the company is also targeting an increase in the size of this year’s dividend by about 36 per cent to 30p. It has a policy of growing returns to shareholders and hasn’t cut the size of its dividend once over the past 25 years. Buy. MF

Revolution Beauty (REVB), a global beauty and personal care group, was admitted to Aim in July. The group raised £300m and floated with a market capitalisation of £495m. The share price has not boomed since the listing: it bumped along after debuting at 170p and has since fallen by almost a third. Saying that, investors do not have much to go on with only one trading statement since the listing and full interim results to be released later in November.

Ecommerce is central to Revolution’s growth vision. The group sells a range of beauty products direct-to-consumer through its website and also utilises high-street and online wholesaler relationships. But to management, “the long-term growth opportunity in mass beauty remains vast with more consumers switching to online”.

Revolution takes a black-and-white approach to animal testing and the use of animal products. The group is PETA-certified and states that no animal testing is countenanced at any stage of development. It is working towards the aim of its skincare products being completely free of animal products. In a world that is increasingly conscious of animal rights, especially amongst younger generations, this could give it an edge over competitors.

A trading update was released in September. This revealed revenue of £78m for the six months to 31 August, an increase of 35 per cent on the prior year. The 2019 accounts record full-year revenues of £120m, and so the group looks on track to outperform pre-pandemic top-line performance.

It is yet to be seen how the cost and supply chain headwinds sweeping the globe have and will hit the business. The trading update notes that management is “cognisant of global supply chain disruptions and, having reacted accordingly, does not expect the group’s ability to offer products to its customers to be impacted”. Perhaps a hint comes from Revolution’s recent £23m acquisition of Medichem Manufacturing, a group supplier that provides skincare and haircare products. This will shore up and enhance control of the supply chain. The move is also forecast to significantly bolster earnings from fiscal year 2023.

The full interim results will be pored over by the market once released. They will give a more detailed view of performance since the listing, future group prospects, and exactly what investors paid for in the summer. Until then, we say wait. Hold. CA

IG Design (IGR) was hit by Covid-19 just as the group was restructuring and integrating the acquisition of US gifts and crafts business CSS. The bottom line suffered due to these complex factors. Now the gifts and stationery manufacturer is struggling with cost headwinds and supply chain issues. A recent trading update revealed this has led to a significant downgrade to earnings forecasts, causing IG shares to plunge by more than a third.

Cost pressures look set to continue for some time. Management expects disruption will “continue into the second half of the current financial year and also into FY2023”, while operating margins are now forecast to be 175-225 basis points down from last year. Net debt is also rising.

However, there are some positive signs. Like-for-like revenues were up by 11 per cent for the six months to 30 September and CSS is delivering growth. With such extreme share price volatility, though, it makes sense to wait until the picture becomes clearer. Hold. CA

Randall & Quilter (RQIH) made its name with investors as an astute buyer of closed insurance books that could then be run-off for cash. As lucrative as this business model can be – liquidating insurance books generate a lot of cash – the market has always priced the company’s shares at a discount due to the consistent need to raise capital in order to buy the books in the first place. Consequently, RQIH has always traded at a relative discount to its peers.

Addressing that imbalance has been a priority for management for some time. The solution involves the company improving the quality of its earnings by generating a greater proportion through more recurring fees through the launch of its Gibson Re vehicle – effectively turning itself into an asset manager. The impact of this will initially be quite lumpy over the next couple of years as the recurring earnings ramp up.  According to Numis, operating earnings of 4.6p a share are expected this year, moving to 8.3p and 19.1p in 2022 and 2023, respectively. Buy. JH

Silence Therapeutics (SLN) sees its future as a publicly traded entity beyond London’s junior market. Subject to shareholder approval, the biotech group will delist its shares from Aim at the close of trading on 29 November 2021. However, Silence will retain the listing of its American Depositary Shares (ADSs) on the Nasdaq Global Market.

Management believes the move will enhance the liquidity of its securities in the US, but it also underlines the global extent of its ambitions. Silence Therapeutics’ global expansion will be predicated to a large degree on collaborative agreements, apropos which it announced new development programmes with Hansoh Pharmaceutical Group (HKG:3692) employing the group’s ribonucleic acid (siRNA) therapeutics.

Ensuring adequate capital flows is often a major challenge for biotech firms with negative earnings and cash outflows, but Silence Therapeutics believes that its hybrid business model points the way forward. Indeed, the group received £33.7m in non-dilutive capital from collaboration partners in the first half of 2021. Hold. MR

Outsourcers have had something of a PR problem in recent times. But outsourcing in the digital age often amounts to optimising – rather than substituting – existing work practices, for what management at Ienergizer (IBPO) describe as “mission-critical business processes”. You might think that’s something of a catch-all description, but the group’s competencies have broadened significantly since its admission to trading in 2010 and are applied across a wide range of business practices from accounts receivable to back-office support.

Ienergizer’s digital offering is tailored for the gaming, healthcare, publishing, legal and financial services sectors, and is conducted through 11 delivery centres on six continents.

Management believes there are inherent advantages to being a medium-sized entity, not least of which is the ability to forge bespoke customer-focused partnerships, reflected in the “recurring nature and longevity of contracts”.

That last point is doubly significant given the group managed to expand its cash margin at its March year-end, although it could be argued that the balance sheet has deteriorated from the prior year due to refinancing and the payment of a special dividend. MR