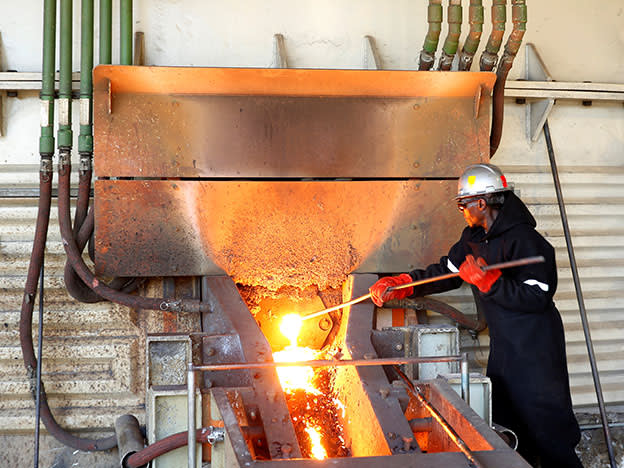 We can't recycle our way to a green economy

The 'green' economy will need massive amounts of metals and while reusing materials such as copper, steel and aluminium are critical to global metals supply, there just isn’t enough scrap to keep up with demand. But there also aren’t a sufficient number of mines in development to keep up with forecast needs, especially as the metals-intensive energy transition ramps up.

One recently announced solar project in Australia demonstrates just how much copper the energy transition could need. Sun Cable plans to export electricity to Singapore from the Northern Territory through a 4,200km undersea cable. The copper needed for this, as forecast by Liberum, is between 225,000 and 700,000 tonnes, meaning the raw materials alone would cost between $2.1bn and $6.6bn at the current spot price. This would be the longest cable of its kind – five times the length of the Norway-UK interconnector, for example – but this type of infrastructure is badly needed for the shift away from fossil fuel power, given much of the world (including Southeast Asia) relies on coal power.

At the same time, the forces pushing the world to cleaner energy generation are also raising the standards for mines, looking at carbon emissions and environmental damage and listening more to local communities. The Cop 26 agreement on forests should also make permitting for new mines tougher, according to consultancy Wood Mackenzie. “Agreements like those on forest protections, while critical, work against the supply of elements such as cobalt and nickel which are crucial to the energy transition,” said Julian Kettle, Wood Mackenzie’s metals and mining vice chair,  last month. “As yet, decision-makers apparently fail to fully understand this paradox,” he added.

So what are the options that tick both environmental and supply boxes? None, really. But some might come close. And copper demand forecasts estimate that a whole new Escondida – the world’s largest copper mine, producing 1m tonnes a year – will be needed every year for the next decade.

Macquarie Bank’s analysts forecast a slight supply surplus in the short term, peaking at around 300,000 tonnes in 2023, before the market falls back to deficit by 2026 on strong demand growth for the red metal.

Recycling is a hot business right now. Last month, Renewi (RWI) boss Otto de Bont told Investors’ Chronicle the prices for recycled materials in some categories had climbed above those of ‘virgin’ options, as companies try to strip emissions from their supply chains. He said recycled metals such as aluminium had a carbon footprint one eighth that of a mined equivalent.

This is a global market  and competition is getting fiercer for good quality scrap. BMO Capital Markets analyst Colin Hamilton said scrap metal could become the “next big trade battleground”, using the example of the European Union blocking exports to developing countries. The European Commission said in a report earlier this month it would only allow exports to non-OECD countries (for example China) if “they are able to manage them sustainably”. It will be up to exporters to audit whether the buyers are acting in an environmentally sound way.

Hamilton said the proposal was being dressed up as environmental policy, but would have the secondary impact of keeping valuable scrap metals available for local smelters.

Despite this greater demand, recycled metals aren’t likely to trade at a premium to mined materials as plastic and paper have done, Hamilton said, given the added difficulty and high quality requirements of scrap. He said the discount could shrink, though, and forecasts that metals and mining companies will invest in scrap smelting operations as well.

This is already a massive business, to be clear. The nickel sector used 1.7m tonnes of mined supply last year and just over 900,000 tonnes of recycled supply. One of the longest-standing US recycling companies said in its most recent sustainability report that recycled copper used 80-90 per cent less energy than mining and smelting primary. This massive proponent? Glencore (GLEN), which owns decades-old recycling assets in the US.

This sector is likely to grow significantly in the coming years, but won’t provide the answer by itself.

Imagine a copper mine that doesn’t have an open pit or kilometres of underground workings: it’s difficult, right? A London-listed, North American-focused company says it will soon have this exact scenario in operation. Taseko Mines (TKO) uses a technology called ‘in-situ leaching’ where copper is effectively pumped out of the ground using a solution similar to an oil well. The company has had success with this method on a small scale in a pilot plant at the Florence project, where it drilled wells, pumped in a leaching solution and then brought up the ‘‘pregnant solution’, containing copper. Taseko is waiting final federal government sign-off to increase the number of these wells from 13 to 90, which would take it to around 40,000 tonnes of copper a year once fully ramped up.

The mining industry isn’t known for innovation – while company bosses like to talk up new electric trucks and automation, they are still digging up rock and crushing it. Taseko chief executive Stuart McDonald said its production from the $230m full-scale mine would be “six times less” carbon-intensive than traditionally-mined copper. “We’re getting a lot of interest from end users,” he said, pointing to greater consumer interest in the carbon content of products.

Taseko also has a traditional hole-in-the-ground operation in Canada, the cash flow from which will fund the Florence mine. McDonald said the company was able to abandon its plan to bring in a joint venture partner to fund the new mine thanks to the higher copper price. The company is now waiting on its final permit from the US Environmental Protection Agency (EPA).

Another 40,000 tonnes of copper won’t cover much of the demand gap (although would be worth a whole lot more if a forecast gap of 11m tonnes a year by 2035 proves correct).

But traditional mines are also having a go at going greener. More broadly, Macquarie Bank analysts forecast that projects adding 1.4m tonnes a year have either been green-lit in recent months or will be soon, so finding renewable power sources and other carbon-saving measures would have a significant impact on the industry’s emissions.

For example, Anglo American (AAL) has made cutting emissions at its major new copper mine, Quellaveco in Peru, a focus and has also signed renewable energy supply deals across its South American copper portfolio. Switching from coal power will help it hit a 30 per cent reduction in greenhouse gas emissions by 2030. Once again, positive – but this is going to be a very difficult sector to fully decarbonise, much like other heavy industry.

Additionally, while companies are keen to publicise the greener aspects of operations for marketing reasons, there are major financial benefits from focusing on safer and more environmentally friendly mines.

Governments across the Americas, from the Andes to Arizona, are becoming tougher on permitting amid a greater focus on employee safety and protecting the local environment. Even Taseko’s lower-impact project has been hit by delays, with permitting initially anticipated to be finished earlier this year now expected early in 2022.

Horizonte Mining (HZM) in Brazil shows what a strong demand outlook can do for a junior miner. The company has a market capitalisation of just over £100m but has recently managed to raise over $600m in debt and equity to build a nickel mine. Nickel is largely used to make stainless steel but is also an important lithium-ion battery ingredient, driving energy transition excitement.

Even in the steel market, however, this is an area where it looks likely buyers will pay a green premium. Much of the current supply comes from Indonesia, where environmental standards are more lax and coal power is abundant.

“Nickel that is low in CO2, that is high-purity is going to see a very strong place in the market,” said Horizonte chief executive Jeremy Martin. “We’re already seeing that from European stainless [steel] manufacturers, who are heavily focused on scope three emissions, CO2 per tonne of production.”

The distinction between Europe and elsewhere is important as well. China has spent the past few years buying up copper resources in the Democratic Republic of Congo (DRC) and is building hugely energy-intensive nickel processing plants in Indonesia, seemingly without regard for emissions. Recent reporting from non-governmental organisations have suggested a disregard for workers’ rights at Chinese-owned operations in the DRC as well. This is a jurisdiction where public companies from North America and Europe now largely fear to tread given the corruption and risks of violence.

Glencore is one of the last to hold significant copper reserves, through several mines, after fellow miners such as Freeport McMoRan (US:FCX) selling out. Chinese miners have even bought out a major European copper mine, with Zijin Mining buying both an operational asset from Freeport and a bigger development project called Timok by taking over Nevsun Resources for $1.4bn in 2019, outbidding a Canadian company in the process.

Two academics writing in Foreign Policy magazine this month said China’s dominance of both mineral resources and processing of energy metals would be likely to cause issues in the medium term but would spur on more exploration and development elsewhere. “The oil price spikes of the 1970s led new players to search for new sources of oil; the mere prospect of political manipulation of scarce minerals is producing the same phenomenon,” wrote Jason Bordoff from Columbia University and Meghan L O’Sullivan from Harvard University.

But the fact remains those alternative resources and processing capacity are not yet ready. This is good for companies such as Horizonte, Taseko and Glencore, and ideally capital markets will swing into action before 1970s-style shortages arrive, but time is running out.

It’s clear there will be some trade-offs in this space: mines cannot solely be built in places with hydroelectric power and no wildlife. Brownfield mine expansions, where existing operations are given longer lives through exploration, combined with much greater levels of recycling, would be the best of both worlds in terms of environmental outcomes, but the industry (and permitting bodies) would have to massively increase brownfield exploration to get anywhere near filling metal demand gaps.