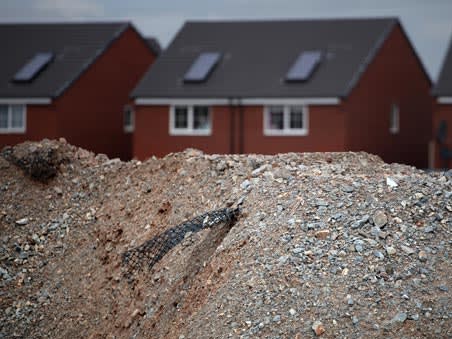 Are the housebuilders now oversold?

Sector fundamentals look much brighter than the political noise suggests

On Tuesday, three reports were published that offered a window into the state of the housing market.

First, Nationwide’s monthly survey of house prices revealed 2022 has seen the strongest start to a year since 2005. The building society found that prices were up 11.2 per cent on where they were 12 months ago, after a better-than-expected January pushed the average selling price to £255,556.

“Mortgage approvals for house purchase have continued to run slightly above pre-pandemic levels,” commented Nationwide’s chief economist Robert Gardner. The end of the stamp duty holiday, which led to a surge in activity in 2021, has not dampened borrowers’ appetite, Gardiner added.

These comments were echoed by the Bank of England’s latest money and credit report, which found that mortgage approvals for house purchases hit 71,000 in December, above the 12-month average of 66,700 immediately prior to the Covid-19 pandemic. Borrowing costs also remain low. Despite a hike in the base rate from 0.1 to 0.25 per cent midway through the month, the central bank said the effective interest rate on newly drawn mortgages climbed by just eight basis point to 1.58 per cent.

Third, a survey conducted by mortgage lender Market Financial Solutions suggested a staggering 18 per cent of UK adults – or around 9mn individuals – plan to buy a property in 2022. These include one-in-seven people who do not own a property and one-in-five who either want to a new home, a second home, or an investment property.

Together, these studies point to strong aggregate demand and benign credit conditions. Rising interest rates will likely lead to tighter lending criteria at the margins this year, but competition among lenders remains fierce. Currently, a buyer of a £256,000 home can still get a 1.64 per cent two-year fixed rate, 25-year mortgage, assuming they have a 10 per cent deposit.

Anecdotally, supply is also failing to keep pace. “Unless the seller is asking for a stupid price, almost everything goes within a week,” remarked one Brighton-based estate agent.

Against this backdrop, it may come as a surprise to learn that shares in Persimmon (PSN), the largest UK-listed housebuilder, hit a new one-year low last week. It’s also far from alone: since the end of January, Taylor Wimpey (TW), Barratt Developments (BDEV), Crest Nicholson (CRST), Bellway (BWY), Berkeley (BKG) and Countryside Properties (CSP) have all dropped to a 12-month low.

Valued against their forecast dividend yields, the sector is trading at its cheapest point since April 2020, when markets were in freefall and distributions were being suspended. Against a somewhat conservative consensus estimate for a 240p-a-share payout in 2022, Persimmon now trades on a double-digit yield, some 44 per cent above its five-year average.

Of course, the sell-off hasn’t occurred in isolation. Investors are currently grappling with the sector’s looming showdown with the government, which last month told housebuilders they need to pay an extra £4bn to resolve the cladding crisis. Housing secretary Michael Gove has set a March deadline for all housebuilders with profits of more than £10m to come up with a “fully funded plan of action” to fix unsafe cladding on buildings with a height between 11 and 18 metres.

This was compounded on 24 January when the usually bullish analyst team at Jefferies sharply lowered their price targets for developer shares. In a note titled “Hold onto your hats, it’s going to get blustery”, the brokerage suggested bulls should assume “the sector shoulders the whole burden, even if this implies they pay the cost not just for their remediation but also for everybody else's”.

Legal liability remains a thorny subject. “Housebuilders have not done anything wrong,” one housebuilding executive told the Investors’ Chronicle this week. “They used products which passed government-approved tests, and there was no intent in using these products to cause harm.”

So far, the largest listed groups have committed around £1bn toward legacy cladding remediation work and will begin paying a new Residential Property Developer Tax, equivalent to an extra 4 per cent of profits, from April.

But there remains a large gap between the government’s demands and any settlement to which developers are likely to agree, noises from industry trade body the Home Builders Federation suggest. “We cannot get close to the £4bn figure that we have heard, with the information that our members have,” the HBF’s policy director David O’Leary told a parliamentary committee hearing this week.

Housebuilders continue to hold some strong cards. Wherever the axe falls, the government is still hugely reliant on private developers to hit an (as yet unmet) target to build 300,000 homes a year. Put simply, the higher the remediation bill, the less capital will be available for new housing. Reduce supply, and the state risks stoking house price inflation further.

On this reading, the outlook may not be as bleak as some have assumed. Recent trading statements have been bullish, following a year in which margins and supply chain disruption were both well managed. Balance sheets are also robust: rising house prices mean the sector’s land banks, often held at cost, are likely to be worth more than many shareholders assume. And while a cumbersome planning regime eats away at capital returns, it arguably favours well-resourced developers.

Just ask the team at Jefferies. Despite its newly cautious stance, the bank has a ‘buy’ rating on all but three of the sector’s £1bn-plus stocks. And those three – Berkeley, Bellway and Barratt – are still rated a ‘hold’.