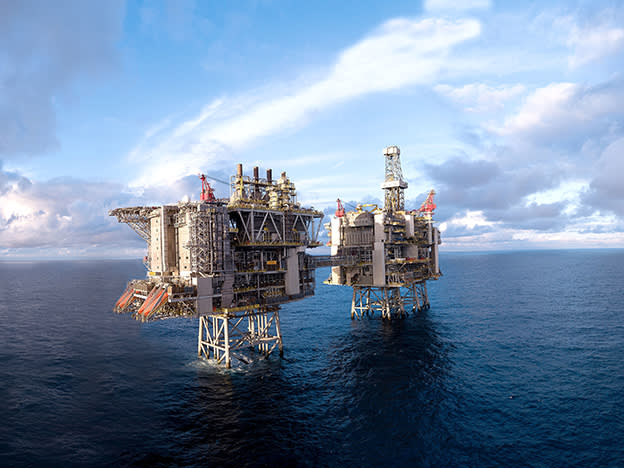 The FTSE 100 led the gains in early trading in Europe as results from BP (BP) lifted the heavyweight by 1.6 per cent, while heavier weight Shell (RDSA) followed suit. Profits at BP rose to $12.8bn, the highest in eight years on higher oil prices and cost cutting efforts. It marks a sharp turnaround from the loss reported in 2020 due to oil demand destruction due to coronavirus restrictions. Fourth quarter earnings were above forecast. It comes as the Treasury has reportedly pushed for six new North Sea oil & gas fields to get the go-ahead... the energy price crunch has persuaded at least some of those in power that pursuing net zero at all costs is a burden on ordinary people that wasn’t thought through. After initial gains, shares in BP pared gains as investors digested the results and comments from CEO Looney more fully, pulling the FTSE back from its high. On a related note, SSE (SSE) rose over 1 per cent as rising power prices encouraged it to lift its outlook.

Nevertheless, the FTSE 100 has emerged from the recent turbulence in global stock markets to hit its highest since the pandemic. The lack of exposure to speculative tech names like Ocado has been a positive for the UK market as the great unwind from this bloated corner of the market takes place in the US. The FTSE 100 has outperformed in 2022, rising over 3 per cent whilst the DAX (–3.5 per cent), Dow Jones (-3.5 per cent) and S&P 500 (–6 per cent) have all fallen. The Nasdaq Composite is down over 10 per cent still. We’d talked up the FTSE being the place to be for the rotation from growth to value – question is whether we see a double top around this 7,600 area or if there are legs to drive on to 7,700 to fully recover the pandemic losses.

Across the Stoxx 600, chemicals, basic resources, autos, utilities and food & beverage all rose about 1 per cent in early trade. Broad-brush gains, risk reasonably well bid although we are seeing the dollar come back… chiefly it seems on EUR bears gripping hold of the EURUSD cross. The US 10-year yield is nudging closer to 2 per cent. Lagarde spoke yesterday, less hawkish. Also worth pointing out that Knott – among the most hawkish – only called for one hike by the end of the year…market pricing in more. Germany’s 10yr bund yield jumped top its highest since January 2019 at 0.252 per cent this morning before sliding sharply back to where it started. Bund-BTPs spreads continue to widen.

Amid the political storm of surging energy prices and the uncertainty of European gas supply thanks to the potential Russian invasion of Ukraine, BP (BP.) has delivered an almost-decade high December quarter profit.

The supermajor, which has a significant Russia business through its stake in Rosneft, reported underlying replacement cost (RC) profit, its preferred measure, of just over $4bn (£3bn) for the fourth quarter, and $12.8bn for the full year.  This turnaround from 2020, which saw an underlying RC loss of $5.7bn, has come thanks to the very strong oil and gas prices from the second half of last year. The company said further volatility in energy markets was likely because of geopolitical “uncertainty” and low gas storage levels.

BP has joined the other energy giants in increasing its investor payout in response, through another $1.5bn in buybacks, on top of the $1.7bn completed in the December quarter. The quarterly dividend remains at 5.46¢.

BP chief executive Bernard Looney said the company had made “strong progress” in its major transformation plans and would put in a new goal of hitting net zero carbon emissions for all operations and sales by 2050. In the short term, BP is set to increase oil production this year but will see a drop in output from its gas and low carbon division. AH

Arm planning to IPO after its deal with Nvidia collapses

SoftBank (JP:SFTB) is planning to IPO chip designer Arm after its long-protracted deal with Nvidia (US:NVDA) finally collapsed. In a statement, SoftBank said the “parties agreed to terminate the Agreement because of significant regulatory challenges” and that “Arm will now start preparations for a public offering”.

The deal, which would have been the largest ever in the chip market, was investigated by antitrust regulators in the US, UK and EU. A number of large technology companies, including Apple (US:AAPL), Microsoft (US:MSFT) and Qualcomm (US:QCOM), rely on Arm’s chip designs while Nvidia has a dominant position in the desktop graphics processing units market.

Speculation will now turn to where Arm might list. The company is based in Cambridge so there would be some hope it could list in the UK. However, the Financial Times reported that New York would be the preferred venue. SoftBank said it would start preparations for the offering within the fiscal year ending March 2023.

SoftBank will get to retain $1.25bn prepaid by Nvidia which will be recorded as a profit in its fourth quarter results. AS

Better news on the defensive front for Avon Protection

In Q4 2021, Avon Protection (AVON) took the decision to shut down its body armour business following news that its Vital Torso Protection plates had failed initial US Army tests. The shares duly headed south, but the group has announced that it has been awarded a contract for the second-generation Advanced Combat Helmet, worth a maximum of $204m (£151m) over a five-year period. Shares were up 5 per cent on the news. MR

Social care provider CareTech (CTH) is bolstering its presence in the Middle East, saying that the region has “significant unmet population need” and attractive policies.

The group, which operates residential homes, schools and hospitals in the UK, now has stakes in three companies in the United Arab Emirates. Its latest acquisitions have almost doubled the size of its international activities.

CareTech began its Gulf expansion in 2020, when it bought a majority stake in AS Group, a mental health services provider. It has now purchased a 51 per cent stake in the Wellness Group, a company based in Abu Dhabi. Meanwhile, AS Group has acquired a 70 per cent interest in Dmetco-Bayti, a healthcare provider which operates across the UAE.

In total, CareTech will pay £11.9mn in cash upfront on completion of the two transactions, with deferred cash payable of £5.5mn. Analysts at Panmure Gordon have now increased their Ebitda forecasts for 2023 by 3 per cent. The broker predicts that the Middle Eastern division will provide growth ahead of UK operations. JS

Ocado (OCDO) dragged on the index though as shares plunged eight percent on lowered guidance and a 12 per cent drop in core earnings. EBITDA declined from £73m to £61m last year. The blame lies on continued investment in its platforms but investors who’ve been in for the long haul are clearly losing patience. Overall, Ocado delivered a loss before tax of almost £177m... when do the profits come? And if not now, will they ever?

Just Eat Takeaway (JET) shares are lower to the tune of 2 per cent as it announces plans to delist from the Nasdaq. Another that will eventually ditch Amsterdam for a single London listing? It wasn’t that long ago that it was ejected from the FTSE for being too Dutch.

Stocks fell on Wall Street on Monday. Meta (FB) declined another 5 per cent as its post-earnings slump continued to do damage. Peloton (PTON) surged 21 per cent on rumours that Amazon (AMZN) and Nike (NKE) could be lining up to buy the company. The Nasdaq finished down 0.58 per cent, the S&P 500 down 0.37 per cent. Choppy session, the Dow finished flat and Asian shares were mixed.

Cathie Wood is launching a new ETF made up of private companies and illiquid stocks...perfect. Make mark to market great again. Pesky things like public markets and liquidity be damned! ARKK filed for a new fund that will focus on “illiquid securities and securities in which no secondary market is readily available, including those of private companies.”