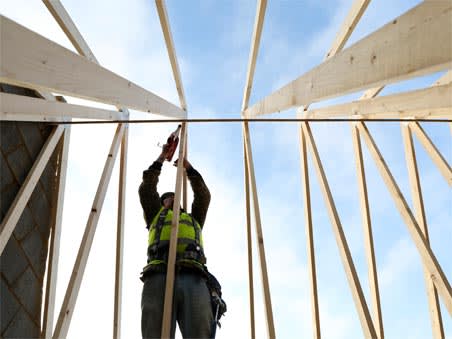 The market appeared largely unfazed by news that Barratt Developments (BDEV) had registered an 11.1 per cent fall in completions in the last six month of 2021. Nor did investors seem overly taken with a 49 per cent hike in the half-year payout rate. The reality is that comparisons for the housebuilder, in common with those for industry peers, have been skewed by a combination of pandemic-linked disruption and government support measures for buyers, most notably the stamp duty holiday, which was phased out through last summer.

So we shouldn’t read too much into statistics, as Barratt returns to a “more normal seasonal phasing of completions”. But revenue was constrained by reduced completion volumes, only partly mitigated by a relatively modest £4,500 increase in average selling prices to £288,000. The increase was held in check by a proportional reduction in the number of London properties, together with a slight reduction in the average size of homes completed in the period. Tellingly, central and municipal government incentives played a reduced role in markets, with 22 per cent of private reservations utilising Help-to-Buy schemes, down from 49 per cent in the comparable half-year.

Barrett now expects to complete 18,000-18,250 homes this year, 250 ahead of previous guidance, and higher than pre-pandemic levels. Forward sales are strengthening and weekly private reservations per active outlet for January were 16.9 per cent in advance of the recorded rate in the equivalent period in 2021.

Looking ahead, although Barratt recorded a 120-basis point increase in the adjusted gross margin to 25 per cent, management is guiding for an increase in total build cost inflation (including infrastructure, materials and labour) of around 6 per cent for the full year. This could potentially weigh on cashflows, though bosses estimate that “forward sales at the start of the second half incorporate underlying sales price inflation of around 7 per cent”, so the overall effect on marginal profitability will be “neutral or positive”. There is also an improved income stream in prospect, through the implementation of a phased reduction in dividend cover, from a multiple of 2.5 in full-year 2021 to 1.75 in 2024.

We, somewhat cravenly, retain our neutral stance, as persistent commodity price inflation, the spectre of rising interest rates, and uncertainties linked to the UK’s £4bn cladding improvements bill are set against a lowly forward PE multiple of 6.7 times consensus earnings (ex-cash) and a forecast dividend yield upwards of 5 per cent. Hold.