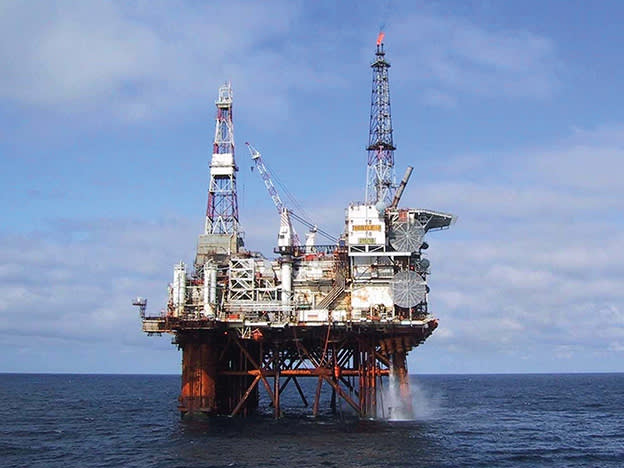 Oil prices have soared in the wake of sanctions on Russia following the country’s invasion of Ukraine. This morning Brent rose above $113 and WTI above $111 as the market digested the full effects of the sanctions and risk of retaliation by Russia and the likely pressure that will be brought to bear on Western governments to ban Russian energy exports.

Russia is starting a new phase of the campaign, bringing a lot more force to bear and shelling civilian areas. This poses the risk that the West will encounter growing pressure to sanction Russian oil and gas exports, with all that would entail. Centrica (CNA) said it is urgently seeking to end its natural gas supply agreement with Gazprom (MCX: GAZP) – self-sanctioning already well underway. Exxon Mobil (NY: XOM) followed Shell (Shel) and BP (BP.) to say it will exit Russia, leaving $4bn in assets in doubt. We are seeing this with the container ships too, and banks. Moreover oil traders are already starting to try to secure alternatives.

We should note that rising oil prices are a windfall for the Kremlin and Russia’s terms of trade - the ratio of its export to import prices - is at its highest since oil prices fell in 2014. This is one of the reasons why Western governments might play this card – the cognitive dissonance of squeezing Russia on all fronts with sanctions while still funding their war machine by buying oil and gas may not survive for long. The other reason will be mounting pressure from their electorates as bombing on civilians increases, leading to more deaths and distressing scenes for the TV screens.

OPEC+ convenes later this morning and is seen maintaining the current pace of production increases, sticking to the incremental 400k bpd. The cartel’s technical experts lowered their expectations for the daily oil market surplus by 200,000 barrels to 1.1m barrels. Their estimates showed fuel stockpiles in developed nations will be some 62m barrels below the 2015 to 2019 average by the end of 2022, having previously forecast a shortfall of 20m barrels. But the market is not really moving on this as much as just pure fear of immediate disruption to supplies; traders are getting hold of barrels at any price.

Meanwhile, the IEA said it will release 60m barrels from its reserves, with the US contributing half of the total. This has achieved nothing – clearly the market is ignoring it. It’s puny if the West does go down the route of halting Russian energy exports. Russia’s output amounts to 4-5m barrels a day, plus up to 3m bpd of refined products. Fear about supplies is the main driver – securing barrels the priority right now.

Palladium prices surged – Russia counts for 42 per cent of global production. Platinum less exposed, with just 12 per cent of global output from Russia. Wheat surged, going limit up on the futures market yesterday, as did corn. Both grains are popping again this morning to reach fresh multi-year highs. Ukraine is not called the breadbasket of Europe for nothing.

Bond yields have plunged as investors seek shelter, whilst traders are drastically trimming their expectations for central banks to hike this year. Markets now price in less than 15 bps worth of rate hikes by December by the European Central Bank; last week it was 35bps by year end. US 10yr Treasuries closed at a yield of 1.725 per cent. UK yields have also moved lower, signaling the Bank of England won’t be so quick to follow its last two rate hikes with another. The yield on the 10yr gilt fell 30bps to 1.11 per cent, the biggest fall since 2009.

Surging oil prices helped the majors on the FTSE 100; Shell +4 per cent, BP +3 per cent in early trade. Spiking commodity prices also lifted the miners. Evraz (EVR) and Polymetal (POLY) rose this morning – some are clearly trying to catch the knife on ‘valuations’. I’d be a lot more cautious. Both are set to leave the FTSE 100 after their market caps tumbled in recent days having dropped 80 per cent YTD. No love for travel stocks yet after sharp falls yesterday. Both TUI (TUI) and IAG (IAG) down over 1 per cent in early trade.

European stock markets are broadly flat to slightly negative at the start of trade. US stock markets closed down in the region of 1.5-2 per cent yesterday amid broad risk aversion. Energy outperformed.

In FX, we are seeing the dollar flight we’d anticipated on Sunday night. EURUSD has taken a 1.10 handle with the dollar index encountering resistance at 97.75, the Feb 24th high. Gold trades higher around $1,940, Bitcoin is holding onto gains around $44k.

Russian companies are stuck between the motherland and the financial centres that have given them billions and billions in capital in the last few decades. Polymetal (POLY), a gold miner, shows this starkly. The company said it was “appalled” by the “events going on in Ukraine” at its 2021 results announcement. While less forthright than Shell (SHEL) and BP (BP.) statements that specifically talked about Russian aggression, the miner went further than fellow London-listed Russian companies Evraz (EVR) and Polyus (PLZL), both of which said in their results announcements this week that they would continue to “monitor” the “geopolitical” events.

Polymetal’s market capitalisation has plunged almost 80 per cent since the invasion as investors sought to get rid of Russian holdings. Questions also remain about its ability to actually pay the dividends announced in this week’s results, given the ever-growing list of sanctions against Russian entities. A spokesperson for Polymetal said there had been no indications from Euroclear, the company that handles the distributions, that the 2021 final dividend payment could not go ahead.

Always a strong yield company, Polymetal said its final 2021 payout would be 52c a share, taking the total dividend to 97c, compared to 129c in 2020. Given the weakness of the share price, this takes its yield to over 50 per cent. Evraz’s nominal yield is an astonishing 100 per cent. AH