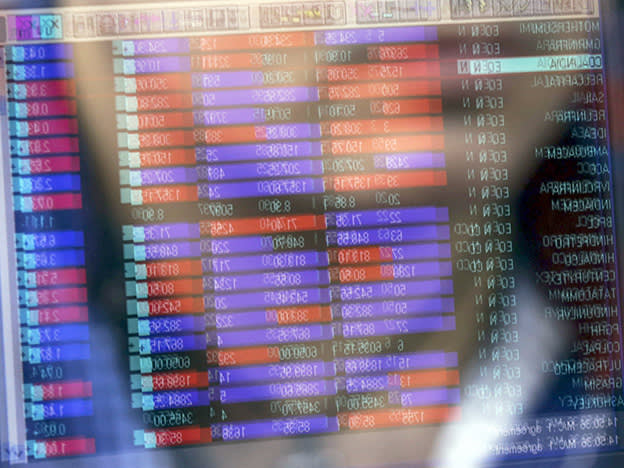 The latest companies and markets news from around the world

European stock markets are lower this morning, giving back a chunk of yesterday’s rally as risk sentiment is more subdued.  Snap (US:SNAP) provided a shock, Eurozone PMIs show activity holding up reasonably well and the euro is building on yesterday’s big gains as the dollar sank to a fresh one-month low this morning.

Monday had all the hallmarks of a bear market rally and already appears to be unwinding. The S&P 500 would need to rally about 10 per cent, or about 400pts, from last week’s lows to even recover where it was around 6 May, and 13 per cent to reach the late Apr/early May highs at 4,300. E-minis show the move already breaking down in classic fashion, nearing the end of the descending wedge – as this pattern plays out you need to be extra careful for an aggressive bear market rally. Valuations are starting to appear compelling - the forward 12-month PE ratio of 16.4 is below the 5-year average (18.6) and below the 10-year average (16.9).

And a heck of a lot is already discounted by the market in terms of the Fed and recession fears. At 20 per cent below its all-time high it’s also at a level traditionally defended to the hilt and a potential springboard for bulls. Worries about growth is keeping the lid on yields (TINA trade) but also seeing inflation expectations cooled – over the last month these have shot lower, though in the last couple of sessions we have seen a renewed uptick.

MS: “3,400 points for the S&P 500 - 13 per cent lower from the current level - more accurately reflects the risks to earnings growth, and expects to see this level by the end of the second-quarter earnings season… until then, vicious bear market rallies should be used to lighten up on the areas most vulnerable to the oncoming earnings reset.”

Earnings are less well understood. Snap spooked the market with a macroeconomic warning that dented tech the most and pointed to earnings revisions that could drag the market lower for longer. The company not only warned that it would miss revenue and earnings estimates but became the latest to say it would slow hiring. “Today we filed an 8-K, sharing that the macro environment has deteriorated further and faster than we anticipated when we issued our quarterly guidance last month,” CEO Evan Spiegel wrote in a note. “As a result, while our revenue continues to grow year-over-year, it is growing more slowly than we expected at this time.”

Snap’s last earnings missed expectations. At the time it project year-over-year revenue growth of 20-25 per cent, and adjusted earnings before interest, taxes, depreciation and amortization of between $0mn and $50mn. “We believe it is now likely that we will report revenue and adjusted EBITDA below the low end of the guidance range we provided for this quarter,” Spiegel added.

Is it just a Snap thing? Probably not given the macro outlook and what consumer confidence repots are telling us. In the wake of the retail shockers last week, it underscores market fears about earnings revisions, in other words earnings guidance will be revised lower as recession looms, inflation remains high and consumers rein in their horns. This implies the market is not fully discounting the economic trouble ahead and is likely to move lower still.

Snap shares are down 30 per cent in the pre-market today and it is sure to weigh on other tech names, particularly social media/ad-based stocks. Meta (US:FB) declined 7 per cent, Pinterest (US:PINS) down 12 per cent and Twitter (US:TWTR) was almost 4 per cent lower after-hours. Alphabet (US:GOOGL) declined more than 3 per cent with implications for YT advertising.

On a related note, Twitter is holding a shareholder meeting on Wednesday. Could be fun.

Meanwhile Zoom (US:ZOOM) surged in after-hours trading with a strong earnings report. The company reported earnings of $1.03 per share, ex-items vs. $0.87 expected, on revenues of $1.07bn. Revenue growth slowed to 12 per cent from 200 per cent a year before... shares were off 85 per cent from their 2020 high and 50 per cent YTD but popped 16 per cent in after-hours. NW

SSE (SSE), Drax (DRX), Centrica (CNA) and even renewables companies have tumbled this morning on the back of a Financial Times report that chancellor Rishi Sunak has asked Treasury officials to work out how to slap a windfall profits tax on power companies as well as North Sea oil and gas ‘cash machines’.

The government has seemingly come around on the idea of a windfall tax on companies making huge profits from the energy crisis. Labour initially proposed a scheme that would cover Shell (SHEL), BP (BP), Harbour Energy (HBR) and other North Sea producers. Harbour’s shares were down 4 per cent on Tuesday morning. Drax took the biggest hit, however, dropping 17 per cent. Greencoat UK Wind (UKW) was down 5 per cent.

Sunak and prime minister Boris Johnson are reportedly planning a strategy to address the cost of living crisis, which has been driven by record-high energy prices. These were already climbing and Russia’s invasion of Ukraine further limited supply, worsening the situation. Fuel and food prices have skyrocketed in the months since.

A government insider told the FT that North Sea oil and gas companies were only “half the picture” in terms of soaring energy bills. A full plan is expected in the coming fortnight. AH

Avon Protection (AVON) chief executive Paul McDonald is stepping down after the company issued another disappointing set of results which sent its shares crashing back below 1,000p.

Although revenue from continuing operations was flat at $122mn (£97mn), the company swung from a profit of $400,000 to a loss of $13.6mn due to delays to US defence budgets and a series of one-off charges.

McDonald, who has been chief executive for five years and at the company for 19, will step down at the end of its current financial year in September. Chair Bruce Thompson said McDonald had been “instrumental in the transformation of Avon Protection” into a group focused on respiratory and head protection gear.

The company’s shares sank by 17 per cent in early trading, leaving them down 70 per cent over the past 12 months. MF

Christine Lagarde – whatever it takes?

ECB chief Christine Lagarde said the central bank will “take whatever steps are needed” to return inflation to 2 per cent over the medium term. For many, the choice of words were important. It sounded like she wanted to channel the spirit of her predecessor Mario Draghi, who famously said he would do whatever it takes to save the euro.

Back in 2012, amid the sovereign debt crisis, the very future of the euro was at stake. Draghi restored calm with those words and it has become synonymous with ECB monetary policy since. The danger facing the Eurozone is very different today but no less existential. Inflation is soaring and whilst a global phenomenon, the euro area is facing a particularly acute problem.

In a blog outlining her current thinking, Ms Lagard struck a noticeably hawkish tone in committing to ending QE rapidly, and cemented the view among market participants that the ECB will hike rates in July.

“I expect net purchases under the APP to end very early in the third quarter. This would allow us a rate lift-off at our meeting in July, in line with our forward guidance. Based on the current outlook, we are likely to be in a position to exit negative interest rates by the end of the third quarter.”

And Ms Lagarde indicated a willingness to swing the axe on inflation.

“If we were to see higher inflation threatening to de-anchor inflation expectations, or signs of a more permanent loss of economic potential that limits resource availability, the optimal policy would become the same as for a demand shock: we would need to withdraw accommodation promptly to stamp out the risk of a self-fulfilling spiral.”

Aren’t we there already? Lagarde had already noted that “the disinflationary dynamics of the past decade are unlikely to return”. Eurozone inflation has risen to 7.5 per cent, well beyond the ECB’s 2 per cent target and whilst staff projections envisage HICP inflation returning to 2 per cent next year, market-based measures do not suggest such a swift return to normal. The 5yr inflation swap has moved up to 2.4 per cent. Moreover, ECB staff projections have been consistently wrong; there is no reason to think that their 2023 and 2024 forecasts are accurate. Central banks insisted inflation was transitory and are now forced to accept they were wrong.

A recent paper from the ECB amounted to a stark admission of failure. “Recent projections by Eurosystem and ECB staff have substantially underestimated the surge in inflation, largely due to exceptional developments such as unprecedented energy price dynamics and supply bottlenecks,” the authors wrote.

In cementing the market’s view for a hike in July, Ms Lagarde appeared to send the euro higher, although money markets were already pricing in a 50 per cent chance that the ECB would raise rates by 50bps in July. Moreover, her comments in the blog had largely been signalled earlier in May. Speaking in Slovenia two weeks prior, she said asset purchases would wrap up early in the third quarter and that  “the first rate hike... will take place sometime after the end of net asset purchases... [and] this could mean a period of only a few weeks”. This would imply July is a go.

Recent commentary from various ECB policymakers had already been sounding the hawkish drum. Joachim Nagel, president of the Germany’s Bundesbank, said the market should expect the first rate hikes soon. Francois Villeroy de Galhau, head of the Bank of France, said he expects a ‘decisive’ June meeting and ‘active’ summer.

So, lots of jawboning and nothing particularly new but if you needed any further persuading that the ECB is about to hike, Ms Lagarde has delivered.

Villeroy de Galhau commented: “Frankly, if you look at President’s Lagarde’s statement [yesterday] morning, the deal is probably done because there is a growing consensus [and] I would play down the idea of a short-term trade-off between inflation and growth. In the short run, our priority is clearly ... fighting inflation".

But a final word of caution: Ms Lagarde this morning said: “Markets shouldn't translate words into any percentage point moves.”