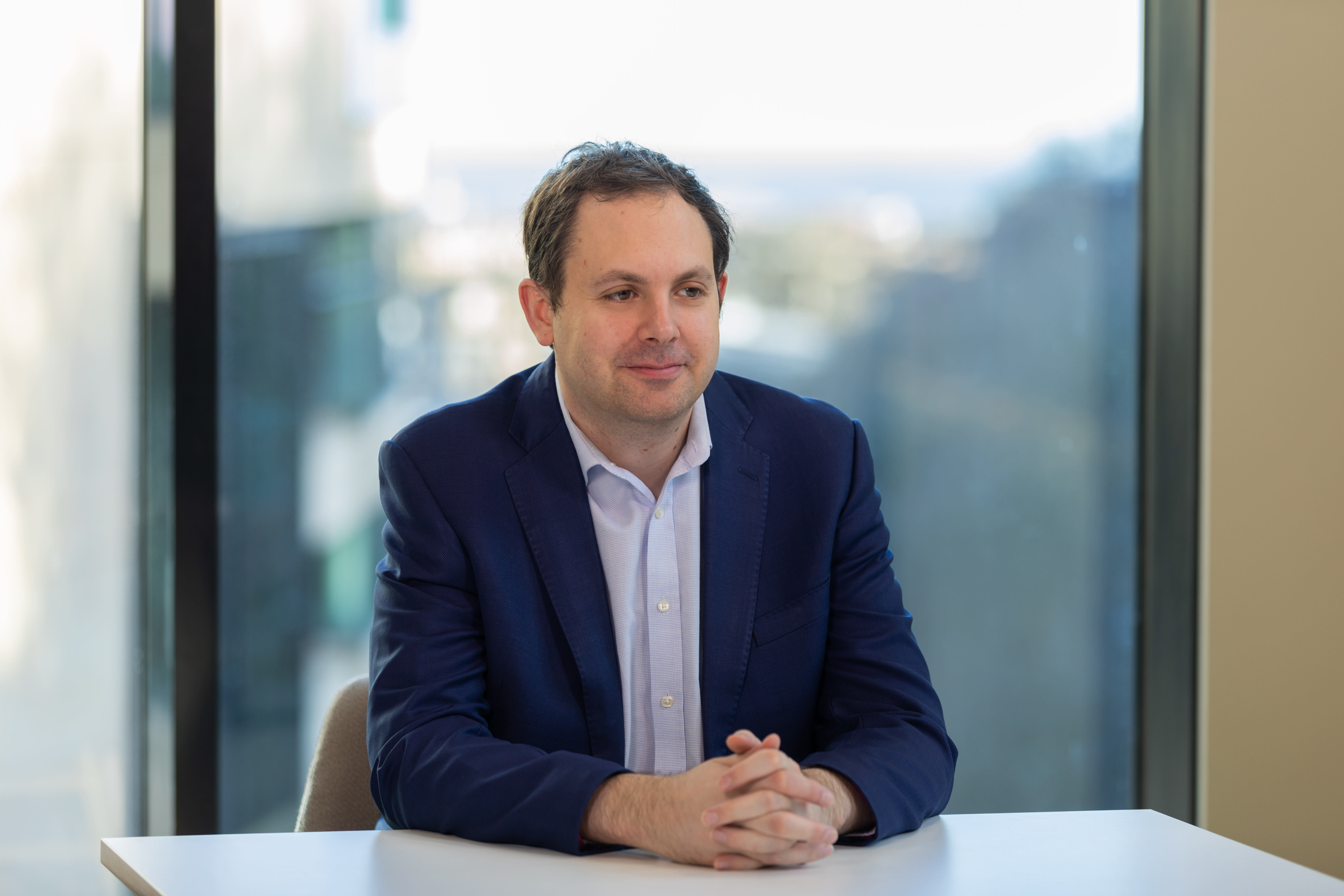 How Scottish Mortgage aims to weather the storm

Lawrence Burns has big shoes to fill. He stepped up as deputy manager of Scottish Mortgage Investment Trust (SMT) last spring when James Anderson (who had managed the trust for over two decades) announced retirement plans and the trust was in the latter stages of a phenomenal growth spurt. Between the bottom of the pandemic sell off in March 2020 and the trust’s peak in November 2021, its share price rose over 220 per cent.

Click here to listen to the full interview (45 mins)

Since then, it has collapsed by55 per cent. But Burns is undeterred. Despite a very different macroeconomic environment – one of inflation and tighter monetary policy – he believes we are still in a period of rapid technological change and that owning the companies at the cutting edge of this change provides the best chance for returns on a five- to 10-year view.

“If you think back over the past 20 years of the change, I think the biggest influence has been Moore’s Law – that doubling of computing power every two years that we will have spoken to you about in the past,” Burns says. “But the impact of that has been concentrated on industries like retail, media and advertising [which are] a relatively small part of most economies. Now what we’re seeing with that doubling of computing power is its impact spread on a wider range of industries.” He’s particularly optimistic about opportunities related to healthcare and the energy transition.

Burns and the trust’s lead manager, Tom Slater, tolerate higher share price volatility than most fund managers. They value companies based on a probability-adjusted calculation of what they estimate they could be worth in five to 10 years’ time. The hope is that the portfolio, which has just over 100 holdings, will capture a few of the next stock market stars early and own them over their lifecycle.

There are people who think this task is just too difficult over multiple market cycles. While Scottish Mortgage has been trading since 1909, it was Anderson who redefined the approach to target high-octane growth.

“What we’re really looking for is effectively a few needles within what is a very, very large haystack,” Burns explains. “And that is a challenge. But I think we’re fortunate to have a number of things that help us in that challenge.” The first is access to some of the world’s top academics and scientists, to help them understand how and where change is emerging.

The second is the ability to take a long-term view. “Take the practical example of Tesla. We didn’t know when there’d be an inflection point in electric vehicles. But we knew because of the improvements in battery technology, the further out you look, the more likely it became,” Burns says.

The trust bought its first unquoted holding 10 years ago. Today, 30 per cent of the trust’s assets are in unlisted holdings, amounting to around half of the number of the portfolio positions. With companies coming to market later, the managers say this enables them to capture growth earlier. However, the 2022 sell-off has raised questions about how these companies are valued, and if there might be grounds for concern that their values lag those of public markets.

Burns explains that the trust has an independent valuation committee for its private holdings that follows international guidelines and that he and Slater have no say in the matter. “That fair market value is really the amount of money that we would get for this company if we were to go out into the private markets and sell it today,” he says. While he admits judging this accurately is a “difficult task” for the valuation committee, he says it bases valuations on comparable listed peers and the available secondary market data.

In terms of timing, the private holdings are valued every quarter on a rolling basis, with around a third being valued every 30 days. Trigger events – such as a new funding round, an initial public offering, a deterioration in the operational mechanics of a company, or a substantial share price move among listed peers – can also lead to valuation changes.

Burns says there “wasn’t much of a secondary market” when Scottish Mortgage started investing in private companies, but it is becoming “increasingly vibrant”. But Scottish Mortgage hasn’t used it to sell or reduce any holdings. “We’ve done that because part of our element of going in and supporting these companies is saying we’re going to back them for the long term. Trying to sell two years later in the secondary market doesn’t really fit within that.”

Of the trust’s public equity positions, Burns says that around 75 per cent are producing positive earnings. On a free cash flow basis, which is arguably what matters most, he says, around 10 per cent of the portfolio is producing negative cash flows.

“Within that, I think it’s probably worth pointing out that there’ll be a number of companies that could be profitable, but are choosing to continue to invest to build out that long-term opportunity,” he explains.

Burns says the conversations he and Slater are having with a number of founders suggest that so far demand and structural drivers are holding up well for the trust’s companies, and they are encouraging them to stress test and understand what will happen if the economic backdrop worsens significantly. “What we’re getting back constantly, is that those stress tests really are being taken to heart and taken seriously within those companies,” he says.

The portfolio’s gearing has risen as the value of the holdings has fallen and is currently around 16 per cent. Burns isn’t concerned about this and says that on average over the past decade it’s been around 12 per cent. “It’s something that’s monitored on a daily basis and we feel like we’ve got ample headroom to deal with that,” he says.

The trust has significant exposure to China, a country from which the managers feel some of the best innovation has emerged in recent years. In March 2022, 16 per cent of the portfolio was in Chinese holdings, down from 24 per cent the previous year, following the slump in Chinese share prices.

“I think we need to be open about this. The level of government intervention and the breakdown or continued breakdown possibility of US-China relations have been broader and stronger than we would have expected,” Burns says.

He says that if government intervention means there is a cap on the scale or profitability Chinese companies can achieve, that is something they need to take “very seriously” as they are looking for growth outliers. And while he thinks that the probability of relations between China and the West deteriorating with sanctions leading to foreign investors unable to access their money is “very low”, he says it has risen as a possibility and this feeds into his scenario analysis.

However, he does not think China is uninvestable. “It’s a huge part of the world, a huge part of the economy, [it has] a huge amount of innovation and dynamism. I think to cut shareholders off from any exposure to that for a generation would be quite extreme”. He also thinks that the societal benefits these companies are bringing is recognised by the Chinese government, and he pays close attention to how the government views these benefits. In the case of Nio (US:NIO), it’s improving air pollution in cities via electric cars, in his view, while Pinduoduo (US:PDD) is about efficient consumption of agricultural products.

Burns says the main holding he has been adding to recently is Moderna (US:MRNA), which has fallen by over 70 per cent since its peak last August. “We think it has a very broad platform, but it has been looked at through a very Covid-specific lens,” he says. “Actually its platform can be applied to HIV, to Zika, to cancer and a range of respiratory diseases”. According to FactSet data, the company is now trading on six times forward earnings and Burns says it has around a third of its market capitalisation in cash.

The main company they have continued to take money out of is Amazon (US:AMZN) where, on a five- to 10-year view, the team think the possibility of a large return looks increasingly difficult. “I think it was a combination of being a little bit more mature in the core ecommerce business, having Jeff Bezos and Jeff Wilke step down, and having to share the cloud market with more and more players.”

The trust was trading at a discount to net assets of 15.6 per cent on 16 June according to Winterflood – the widest it has been in the past 12 months. On a one-year view, it has the worst net asset value and share price performance in Winterflood’s global equity investment trust sector. However, on a three- and five-year view, its returns still come out on top.

Click here to listen to the full interview (45 mins)

2009, graduated from the University of Cambridge (BA, Geography)