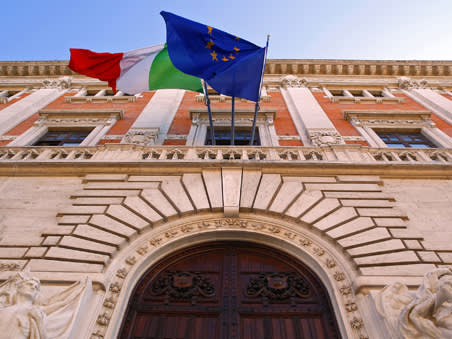 A combination of a tottering construction boom and highly fragmented banking market raises questions, yet again, over the state of Italy’s banks

A spike in the spreads between Italian government bonds and German bunds to more than 2 percentage points earlier in June awakened uncomfortable memories of the 2010 sovereign debt crisis that felled Greece and left Italy needing to do some painful restructuring work on its banking sector.

Appropriately for the country that invented balance sheet accounting (plus the term ‘bankrupt’ – literally ‘banco rotto’ – the broken money lender’s bench if debts went unpaid), the need to undertake a rapid recapitalisation of Italy’s banks was underlined by the near-failure of the venerable Banco Monte dei Paschi di Siena in 2017. Now that inflation and interest rates are on the rise in the eurozone, the state of Italy’s banking system has again come under scrutiny in the aftermath of a slowing construction boom.

Monte dei Paschi, which is 64 per cent owned by the Italian state, recently put together a cash call for €2.5bn (£2.1bn) to fund another turnaround plan. The bank wants to bring its cost ratio down to 60 per cent, from 71 per cent, by cutting 4,000 jobs at a one-off cost of €800mn. Although emblematic of the excesses of the last financial boom, which had a root in unsustainable speculative property investments, the latest issue to affect the sector has a strange environmental, social and governance (ESG) element to it, and highlights how a fragmented secondary banking system can accumulate silent threats.

Italy was hit early and hard by the coronavirus pandemic, with tens of thousands of deaths and an economy driven to the wall by lockdowns and supply chain disruption. Part of the recovery process was the development of a system aimed at unlocking €200bn-worth of EU post-pandemic recovery funds. These could be accessed by eurozone countries if there was an element of environmental improvement used in the rebuilding process. In Italy, the goverments solution was a complex system of tax rebates that homeowners could claim if they improved the environmental standard of their properties by installing insulation, modern boilers and other energy-saving measures.

The programme was administered through a complex system of grants and trading. Homeowners could claim their tax rebate for work done over a five-year period, or they could sell it onwards to a bank or a builder at a discount – in effect making it a tradeable security. This did have a positive impact on the long-moribund Italian construction sector, which had struggled for traction since 2008, and it added 0.9 percentage points of Italy’s 6.6 per cent of post-covid economic growth.

The scheme was wide open to corruption and graft, unfortunately, and as a result the government has clamped down on the tradeable tax credits, leaving many firms with credits they cannot sell and redundant assets sitting on bank balance sheets. With redundancies and bankruptcies on the rise, and the future of post-Covid recovery funds in doubt, Italy’s government has to act to prevent a potential recession in the building sector and a secondary run on Italian banks – which may be holding large amounts of potentially worthless tax guarantees. One solution to the mess, according to sources cited by Reuters, might be to sell the credits to smaller firms, which the banks can then exchange for Italian government debt.

From a broader perspective, it is fortunate that Italy only has one global systemically important bank, as defined by the Financial Stability Board. UniCredit (IT:UCG) is an international operation, with business split roughly 50 per cent between retail and commercial/investment banking. With a core tier 1 ratio of risk-weighted assets approaching 14 per cent, it is better capitalised than its long-term average of 10 per cent. Monte dei Paschi, for context, has a ratio of 11 per cent and aims to get to 14 per cent by 2024.

However, UniCredit, along with the rest of the sector, will have to start absorbing losses if the eurozone pitches into a recession this year.

The danger is that the secondary banking sector, which forms the bulk of Italy’s banking market – every village seems to have its own local savings bank – could start to feel the pain from the combination of a slowing economy and higher levels of debt delinquency – making further bailouts of smaller institutions a possibility. The sector in Italy has only just recovered from the aftermath of the 2008 crash when it was estimated that 18 per cent of all loans were either in arrears  or non-performing. Any hint that loan books could be in danger again has sent investors scurrying for the hills.

That has left the discount to the rest of the market even larger than for banks in the UK. For example, it is currently possible to pick up UniCredit’s shares on a forward price/earnings ratio of just 4.8, with a dividend yield of 5.5 per cent. Whether that is justified, or not, will depend on what happens during the next few months. Either way, it is not exactly La dolce vita. That situation is mirrored in valuations for banks across the eurozone. For example, the Eurostoxx banks index has fallen by 30 per cent since the start of the year. That could offer a recovery opportunity if the wider system can shake off the stress of a recession.

Fundamentally, banks benefit when inflation forces tighter macroeconomic policy, but it needs a timeline of at least 18 months before a recovery in broader bank valuations can be contemplated.