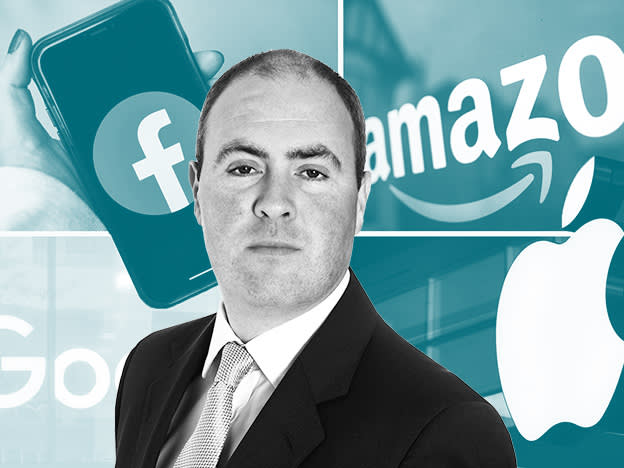 Looking beyond large tech for value

Large US growth companies, in particular tech giants such as Microsoft (US:MSFT) and Alphabet (US:GOOGL), enjoyed a strong run over the past decade. But this year markets and these types of companies have experienced high volatility, meaning that investors need to consider whether to allocate elsewhere or hang on through the rough period.

F&C Investment Trust (FCIT), the oldest investment trust listed on London Stock Exchange (LSEG), has reduced its exposure to US large-cap growth stocks. The trust sold around £600mn-worth of these types of equities with most of the sales taking place last year.

"We cut large-cap US growth allocation from about 25 per cent of the overall portfolio at the start of last year to around 13 per cent," says Paul Niven, manager of F&C Investment Trust. "We reduced that allocation for several reasons including extended valuations and concerns that the cycle was turning with respect to rising inflation and interest rates. And that played out to a greater extent than we had originally assumed. Rising interest rates and inflation are typically a negative for longer-duration growth stocks. We also sold out of small-cap stocks over the past year and holdings in emerging markets."

Niven used some of the proceeds from the sales to increase the trust’s allocation to cash in the early part of this year and, as of mid June, it had around 6 per cent of its assets in cash. But he also allocated proceeds of these sales to US large-cap value, global income and UK equities.

The US value stocks added to include food producer International Flavors & Fragrances (US:IFF), which accounted for 0.8 per cent of the trust’s assets at the end of May, and M&T Bank (US:MTB), a retail and commercial bank.

"And, in general, it’s been beneficial because US large-cap growth has been a quite material underperformer,” says Niven. “The move to cash has also helped as markets have declined into a bear market over the past five to six months."

However, the trust still has a substantial allocation to large US tech stocks, which accounted for five of its 10 largest holdings (see table below).

Niven doesn’t allocate to stocks directly, but rather sets an overall allocation to different areas and then outsources stock selection in each area to other fund managers – what is known as a multi-manager approach. Some of the managers who run F&C Investment Trust's portfolios also work at the asset management firm that employs Niven – BMO, which has recently been taken over by Columbia Threadneedle. The US growth equity allocation is outsourced to T.Rowe Price and the US value allocation to Barrow Hanley.

"We determine allocation to strategies and regions, approaches and styles through 'bottom up and top down' considerations – basically where we see the best opportunities driven by considerations of both cyclical and structural factors, and valuations, bearing in mind that we want to have a diversified exposure," explains Niven. “So we consider, for example, how much we hold in the US, bearing in mind that the US is the pre-eminent market globally. And we think about how we want to be positioned within the US, and how much we want to have in growth stocks as opposed to cheaper value opportunities.

"When we think about the overall portfolio allocation, we want to have a reasonable spread of different strategies, bearing in mind the correlation benefit of investing across diversified sets of returns and how much we have regionally, sectorally and from a style perspective, so that it fits with our overall view on where we think the opportunities lie."

Like a number of global equities funds, F&C Investment Trust has an allocation to emerging marke equities, and these include two Russian stocks – Gazprom, which was selected by its global income manager, and Moscow Exchange.

“These holdings were around 0.3 per cent of assets at the end of January and after the invasion of Ukraine we began to divest, says Niven. "But trading was suspended relatively quickly, before we completed sales, so the value of the holdings was written down to zero. And that was followed by major index providers like FTSE and MSCI removing them from market indices. We'll divest when regulations permit."

Although these stocks did not account for a large part of F&C Investment Trust's assets, Niven argues that it is difficult to completely disentangle the impact of the Russian invasion from what's going on more broadly.

"We were already in an environment where interest rates and inflation were going up, and growth was also going to be more challenged," he explains. "We have become a bit more defensive – we raised cash and cut gearing (exposure to debt) earlier this year. And that move has helped to protect a bit of value in the portfolio, although we are down in absolute terms year-to-date.

"Last year we cut our allocation to emerging markets because we saw a number of problematic trends. China is a very significant component of the emerging market universe [31 per cent at the end of May]. So we're light emerging markets and China. Both areas have been challenged by rising interest rates, a stronger dollar and domestic inflation challenges. Where food prices are a much bigger portion of consumer price indices than in developed markets, it makes it pretty problematic for domestic policymakers. Also, the stronger dollar is problematic from a competitiveness standpoint for countries [whose currencies] have some kind of quasi peg or link to it.

"Emerging markets have also had to contend with China's zero-Covid policy, which has been a significant drag on growth there, and there have been concerns leading to actions from regulators – especially related to disruptive tech businesses in China. Our weighting to emerging markets was reduced during the first half of 2021 partly due to concerns over the Chinese regulatory crackdown and the impact on the market there. I think the near-term outlook for China and emerging markets remains quite a challenge. But on the other hand, valuations have got materially better, emerging markets have underperformed quite significantly, and China is now easing credit conditions. We've not made any moves yet, but I think an opportunity in emerging markets may arise, perhaps in the coming quarters. There comes a point when you get the question on whether the bad news is in the price. But from a slightly longer-term perspective some of these regulatory risks in China are not going to go away and that's going to be an ongoing concern for investors."

F&C Investment Trust's net asset value (NAV) returns beat its benchmark, FTSE World index, in 2021, but slightly lagged it over the first six months of this year, and in 2019 and 2020.

"There will be periods when we underperform against both benchmark and competition," says Niven. "We will perhaps struggle when the market is being very narrow, led by a particularly dominant trend, such as in some of the more recent time periods prior to this year. Then you might struggle to keep up with some very focused, concentrated strategies. That was true when growth was leading the market and there was quite spectacular performance from a narrow cohort of stocks – we were struggling to keep pace with market returns. But over the longer term I think our results demonstrate consistency in return. It's important to remain diversified at this point in terms of exposure across the market. We've seen relatively concentrated strategies in the growth space have a very torrid time in recent months, and I think it's appropriate to retain that diversification. Consistency is a function of diversification – not betting the ranch on one particular outcome, geography, style or approach – and having a blended set of underlying strategies is a key principle we adhere to. But it's also important to make the important calls at the right time, as far as is possible. We won't get it right all the time, but the recent shift in the market, whether from growth to value or the decline in absolute terms, is something that we have to try to navigate.”

The allocation to private equity has held up better than the trust’s publicly listed holdings. "Because these are unlisted holdings they don't price as frequently as listed markets so there's a lag in terms of their pricing," explains Niven. "Private equity has held up well and was an area of very strong returns for us last year, delivering gains of over 30 per cent – well ahead of listed markets. But private equity is not immune to challenges that are facing markets more broadly. In a down market, our private equity holdings may give up some return but typically not be as hard hit as listed holdings. The area in listed and unlisted markets that has been hit the hardest is basically later-stage, disruptive technology stocks. Many pre-initial public offering, late-stage tech companies have either very low or no profitability, but are very highly valued, and I would expect that they are going to see quite substantial valuation writedowns – we're beginning to see that coming through.

“But we've got very limited exposure to that area and, overall the type of holdings that we have are essentially early-stage venture and growth, and mid-market opportunities. These tend to be more lowly valued, and investments and profitable companies that are essentially manufacturing, producing or selling something. So we expect that the immediate impact of recent market events on those holdings will be considerably less, but there will be an impact that'll come through with a bit of a lag. We've seen good long-term returns, above those of listed markets for our private equity exposure. So we’ll continue to allocate to attractively valued businesses in the mid-market buyout space, or leading growth and venture managers."

F&C Investment Trust is transitioning its portfolio to net zero carbon emissions by 2050. "We're developing a roadmap that outlines the medium and longer-term trajectory for the trust's net zero ambitions," explains Niven. "We use the Net Zero Investment Framework as the basis for our approach – a widely accepted methodology. The primary focus is to assess the climate change strategies of each of the companies in our portfolio, and to use our weight as an investor to engage companies that fall short of alignment to a net zero emissions future."

F&C Investment Trust's managers engaged with 168 listed companies on responsible investment issues in 2021, and 22 per cent of this was on climate change. The companies it is currently speaking to include oil producer Shell (SHEL). The trust reported in March that "the interim targets, as well as the instruments used to achieve the required emissions reductions, did not provide sufficient certainty about alignment of the strategy with limiting global temperature rise to well below 2°C. We acknowledge the direction of Shell's transition towards net zero emissions by 2050 for the complete value chain. However, there remains significant room for improvement in the way management is tackling decarbonisation".

Transitioning the trust’s portfolio to net zero carbon emissions by 2050 could affect performance, but Niven says: “In the short run, it could be detrimental to performance because energy has been among the most highly performing areas in the market over the past few months. That said we're not excluding fossil fuel investment and our move back towards more value-oriented and higher-yielding stocks has pushed up energy exposure in the short term, so it's not been a particular performance drag for us. But the portfolio carbon intensity remains below the benchmark’s carbon intensity."