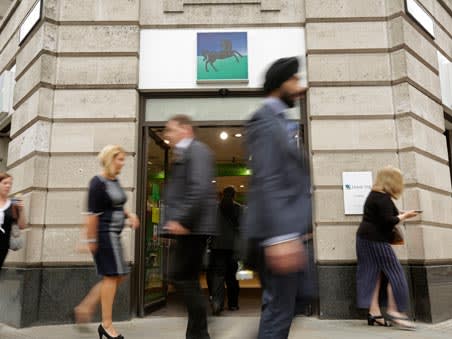 The retail banking giant has stripped back its operations, reducing risk-weighted assets and boosting capital levels in the process

Dividend policy: To deliver progressive and sustainable ordinary dividends, while maintaining the flexibility to return surplus capital to shareholders.

Lloyds Banking (LLOY) has led the pack in simplifying its operations, boosting capital levels and returning to dividend payments. Like its peers, including Royal Bank of Scotland (RBS) and Barclays (BARC), the high-street lender was forced to cut its dividend just weeks before its first state bailout in 2008. However, after retrenching from higher-risk investment banking, trimming risk-weighted assets (RWA) and more than trebling pre-tax profits, the shares returned to the dividend list in early 2015, with management declaring a 0.75p dividend for 2014.

The then-chancellor George Osborne called the reinstatement of dividends “a major milestone for the recovery of the British economy from the great recession”, paving the way for the accelerated sale of the government’s stake in the bank. That initial payment opened the floodgates to some generous increases in annual capital returns, with the ordinary full-year dividend rising to 3.05p a share last year. What’s more, as common equity tier one ratio (CET1) has improved, management has returned surplus capital to shareholders via special dividends, including a 0.5p-a-share one-off payment for 2016.

The government share sale was completed in May last year, returning the group to full private ownership. However, at the release of 2017 full-year results in February, management said that the substantial growth record since payments were reinstated would likely slow to a more normalised rate in future. Meanwhile, the increased level of surplus capital likely to be returned to shareholders – £1bn last year, compared with £350m in 2016 – means share buybacks are management’s preferred method of capital returns. Analysts at Investec are forecasting an ordinary dividend of 3.4p a share for this year, rising to 4.1p by 2020. At the current share price, that represents a very respectable potential yield of 5.7 per cent for this year. Company-compiled consensus forecasts of buybacks of £1bn a year (and £1.15bn by 2021) point to management’s confidence in capital distributions in the years ahead.

But how secure is that income? Management has set a CET1 ratio target of 13 per cent, plus a 1 per cent management buffer. At the end of March, it was ahead of that target at 14.4 per cent. Reducing the risk appetite of the loan book has been critical in shoring up the CET1 ratios, with lower-risk retail assets assigned a lower risk weighting under the Basel III capital adequacy rules. RWAs had declined to £211bn by the end of March, down from £406bn at the end of 2010.

Like fellow income major HSBC, Lloyds has incurred its fair share of misconduct charges, most notably for payment protection insurance, which have blown a hole in the balance sheet. However, the earnings stream is becoming more steady, and annual pre-tax profits have improved consecutively for the past five years. Fewer one-off items have also resulted in a gradual improvement in returns on equity. That’s not to say income generation has been easy; low interest rates have squeezed the net interest margin in recent years. But last year Lloyds’ capital generation beat upgraded management guidance of between 2.25 and 2.4 per cent.

Lloyds’ dividend record is growing ever stronger. Last year’s ordinary payout was covered 1.4 times by statutory earnings per share, up from 1.1 times in 2016. Meeting capital generation forecasts is tied in with the fortunes of the domestic economy, given its strategic focus on more vanilla retail banking. Consequently, the shares are highly cyclical and carry greater UK-themed risks than other big dividend payers. Capital generation will be helped by a rise in interest rates, although it’s worth noting that the Bank of England is forecasting a rise to just 1.2 per cent by 2021. Still, capital adequacy remains the most important factor, and given the bank’s progress there, we count ourselves buyers at 63p.