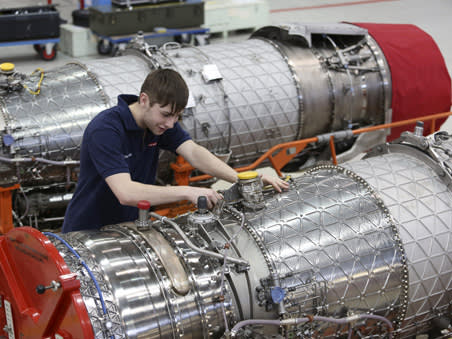 Margins are also up at the engineering solutions provider

Demand for engineering components in the aerospace and industrial vehicle markets helped Senior (SNR) deliver record sales for the year to December 2018 which, combined with an 8.5 per cent operating margin, left adjusted operating profits up by 13 per cent at £91.6m. Adjusted earnings per share rose 12 per cent to 16.08p, but the headline figure retreated 17 per cent to 11.99p as a £16m tax credit from the previous year wasn't repeated.

The main growth driver was the aerospace division, which accounts for 70 per cent of group revenues, and where operating profits rose 6.9 per cent at £80.4m. Adjusted operating margins were stable at 10.6 per cent, however, reflecting volume reductions on maturing programmes and costs associated with the introduction of new ones.

In the Flexonics division, sales to truck and off-highway markets rose by 17.3 per cent, while sales to passenger vehicle markets eased by 5 per cent as the company eschewed adding new low-margin business with high capital requirements. Increased drilling activity saw power and energy market sales up 12.7 per cent, while sales to the power generation market rose by more than a fifth.

Prior to these numbers, analysts at JPMorgan Cazenove forecast adjusted cash profits for the year to December 2019 of £97m and EPS of 16.9p.

Senior pushed the return on capital employed up from 11.9 per cent to 13 per cent, and while the aerospace side should deliver another year of growth, some uncertainties remain over Flexonics. Hold.