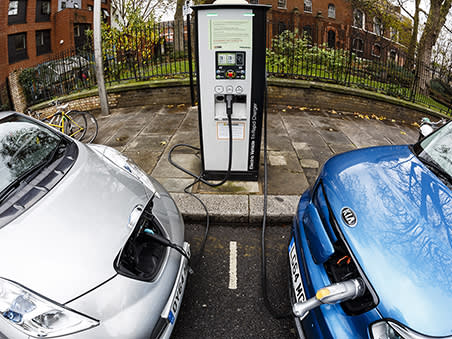 Nobody can be sure which automakers will crack the EV market, so maybe infrastructure assets are the way to go

You could be forgiven for thinking that electric motoring is a relatively modern concept, yet electric vehicles (EVs) predate the internal combustion engine by around 50 years. The technology was largely overlooked until the launch of General Motors’ EV1 in the early 1990s. Despite apparent public interest (the vehicles were leased to drivers in California and Arizona), General Motors (US:GM) eventually canned the project once management decided it wasn’t commercially viable, although critics of the decision believe that it may have been prompted by the realisation that the roll-out of EVs would eventually start to eat into the auto giant’s lucrative spare parts business. Fewer moving parts; fewer replacements needed.

Now everyone’s at it. James Dyson has just released patents that give some idea of the design features that he’s incorporating into an EV due for launch in 2021, while Volkswagen (VOW:GR) is set to unveil the concept version of its entry-level electric ID ‘people’s car’ at this year’s Frankfurt motor show. Midway through last year, GM confirmed that it had plans to roll out 10 new EV models in China by 2020, doubling that number by 2023. Not to be outdone, Honda’s (Jp:7267) ‘Electric Vision’ strategy envisions electrification of all models by 2025.

A strategic problem in the making

Where are we headed? Analysts at McKinsey provide a base-case scenario in which approximately 120m EVs could be silently gliding on the roads of China, the US and the European Union (EU) by 2030, although this is a conservative estimate. To put this into perspective, figures from the European Automobile Manufacturers’ Association (ACEA) reveal that the EU passenger car fleet stood at 257m at the end of 2018.

Here’s an extrapolation worth considering. The ACEA puts per capita ownership in the EU at 587 vehicles per 1,000 people, compared with 173 in China. It’s accepted that China’s rate of vehicle ownership is in advance of other countries when they were in a comparable stage of economic development, but even if it settled at half the EU rate that would still equate to 407m vehicles, a figure 47 per cent above the total number of vehicles currently on US roads.

Last year, the US accounted for 20 per cent of global petroleum consumption at 19.7m barrels per day. But, then again, Uncle Sam, courtesy of the Permian basin, is once again the world’s largest producer of the black stuff. Not so China – so the accelerated rate of vehicle ownership amounts to a looming strategic problem for policymakers in Beijing, therefore it’s not difficult to appreciate why they have imposed local government-enforced EV quotas on manufacturers. Transnational mandates are also in place, such as the EU’s new car fleet CO2 emissions standards for 2025 and 2030, which means that manufacturers are being forced to build substantial numbers of EVs to meet their obligations.

EVs account for just 2.2 per cent of the global automobile market, but more than 2m were sold in 2018, a 63 per cent increase on the previous year. It’s difficult to gauge when the market will achieve critical mass; the point at which it becomes self-sustaining through widespread adoption and retention of existing customers. In terms of the internal combustion engine, the year 1910 is a prime candidate. It marked the first time US auto manufacturers breached the 100,000-unit mark (courtesy of Ford’s Model-T), but by 1930 an estimated 2.48m vehicles were being produced in the US annually.

Unfortunately, then, as now, consumer adoption was far outstripping the related infrastructure. The same period saw a massive roll-out of infrastructure to support the burgeoning industry. The first purpose-built gas station was opened in Pittsburgh in 1913. By 1930, the US had more than 100,000 in operation. The scale of EV infrastructure, specifically the number and distribution of charge points, is dependent on several factors, not least of which a given country’s urban density, but energy analysts estimate that investment in charging infrastructure in the US alone will exceed $18bn (£14.2bn) annually by 2030 – and it’s a relative laggard in global terms.

And while many conventional downstream assets atrophy, the oil majors – in a practice reminiscent of the tech heavyweights – have been incorporating EV charging start-ups at an accelerated clip. At the end of January, Royal Dutch Shell (RDSB) announced it was buying Greenlots, a Los Angeles-based developer of EV charging. The deal came barely three months after Shell had struck a deal to acquire Netherlands-based NewMotion, owner of one of Europe’s largest charging networks. The UK’s other supermajor, BP (BP.), has also been in the buyers’ circle, snapping up Chargemaster – the UK’s largest public EV charging network – midway through last year. And a report published by the Atlantic Council think-tank earlier this year suggests that Exxon Mobil (US:XOM) is actively considering how to invest in EV charging. The moves by the supermajors will surprise no one, but their involvement is likely to intensify as the industry matures and consolidation becomes a central feature.

The ongoing expansion of the charging network will place increased demands on National Grid (NG.), a key stakeholder in the development of EV infrastructure. But the utility has been upbeat in its assessment of whether it would meet an accelerated take-up of EV/hybrid vehicles. Last year, it was questioned on the issue, alongside Ofgem and the Energy Networks Association (ENA), by the Business, Energy and Industrial Strategy Committee. National Grid said its modelling shows that it’s unlikely an inordinate increase in generating capacity will be required, while the ENA believes that it could help to soak up inflexible generation (periodic excess capacity) on the system – a persistent problem for utilities.

Closer alignment of supply and demand on the grid – assuming that’s an unintended consequence – should increase opportunities for suppliers to arbitrage the wholesale and retail price of power, although, short of a Corbyn election victory, the scope for government intervention in this market remains unclear. The EU has put €29m (£25.4m) towards the development of the MEGA-E charging project – 322 ultra-fast chargers and 27 smart charging hubs in at least 10 metropolitan areas in Europe. Several grants for EV charging points are available in the UK, but regardless of its desirability from an environmental perspective, government support inevitably distorts markets in early-stage development – thereby clouding the valuation process for investors.

The government is hoping to spur the roll-out of these public EV charging assets by providing improved access to finance on a commercial basis. London-based Zouk Capital, which offers a wealth of specialist knowledge in the EV charging infrastructure sector in the UK, was selected after a detailed bidding process run by the Infrastructure and Projects Authority.

The fund will be invested in UK companies and platforms, which cover the full spectrum of public EV charging infrastructure across the UK, with the aim of providing a commercial return for the UK government and private sector institutional investors. The fund targets capital gain returns derived from high-yielding assets, rather than focusing on yield income as is the case with most traditional infrastructure funds. The fund is expected to be live shortly.

On average, just under 30 per cent of the 35m cars on UK roads do not have access to off-street parking and at a local level that rises above 50 per cent in many major towns and cities across the UK, which creates a huge addressable market for a public EV charging network in the UK.

A narrow investment angle – for now

Regardless of the involvement of Shell and BP, the EV charging market remains largely fragmented, mostly in private hands, and therefore ripe for consolidation.

Given that home-charging provides the quickest route to building scale, we can say that there will be significant opportunities for digital applications in the marketplace – home charge points that draw on the grid during Economy 7 hours (typically between 10pm and 8.30am), or those with diagnostic capabilities that can identify (and in some instances, rectify) any problems arising during the recharging process. Some chargers have already been designed to store electricity in your EV’s battery when it’s cheaper (and more likely to have been generated through renewable sources), with the option of selling it back to the grid when demand peaks.

Utilities such as Scottish Power and Germany’s E.ON (Ger:EOAN) offer home EV generating technologies, while Aim minnows such as Nexus Infrastructure (NEXS) – the creator of eSmart Networks – are still trying to develop a viable commercial proposition.

There’s a little more scale and experience on offer across the Atlantic in the form of Blink Charging Co (US:BLNK), one of four entities – the others being ChargePoint, Tesla (US:TSLA) and SemaCharge – which account for 60 per cent of the 22,000 charging stations stateside, according to the US Department of Energy.

And if you want some watered-down exposure you might consider Aerovironment (US:AVAV), a major supplier of drone technology to the Pentagon, which has also established a foothold in theEV charger market through partnerships with Volvo (Sw:VOLV-B), Nissan (Jp:7201) and Ford (US:F).

Understandably, many investors are looking to tap into the growth phase of this industry, but given its fragmentation, a lack of publicly traded pure-plays and continuing government intervention, it’s difficult to gauge which companies are likely to succeed.

A danger also exists that the involvement of private equity investors and venture capitalists could crowd out stocks, pushing up prices for ventures, then leaving them with insufficient market liquidity.