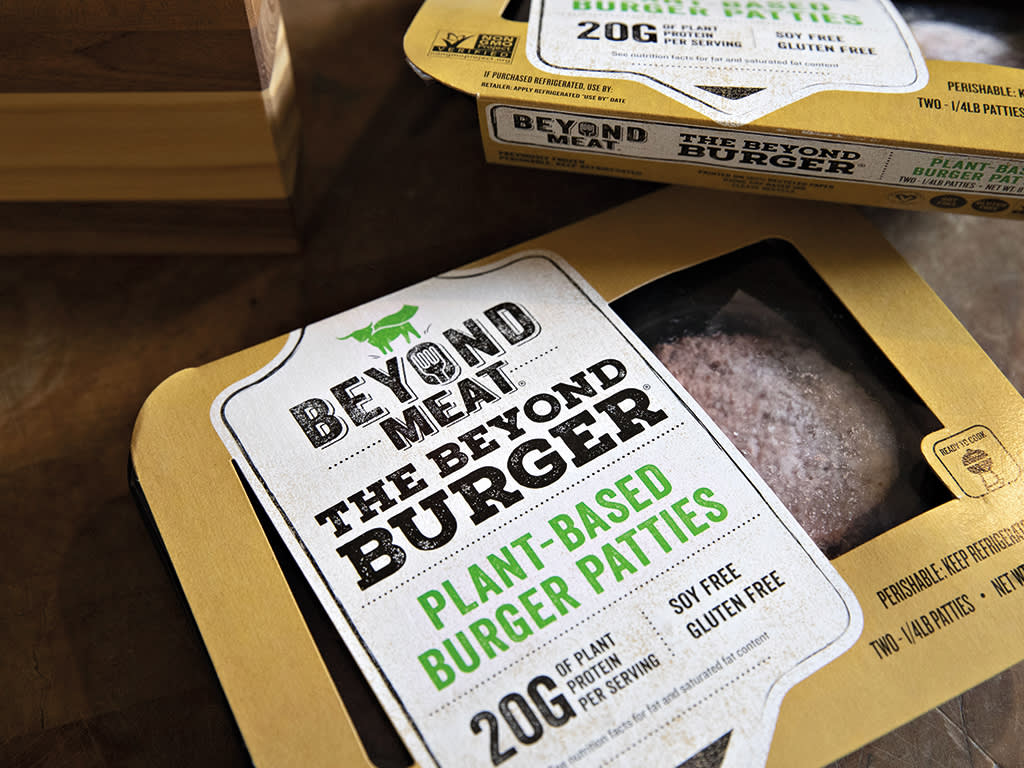 Buying into the plant-based revolution

Meat producers are expanding into plant-based products, while restaurants are adding an increasing number of vegan and vegetarian options to menus

Shares in California-based vegan meat-substitute company Beyond Meat (US:BYND) have surged since going public in May. After pricing its IPO at $25 (£20.70), the shares are now trading at around $165. The company offers “a portfolio of revolutionary plant-based meats”, including alternatives for burgers, sausages, ground beef and chicken. Its products aim to replicate the taste and the texture of meat, and go as far as including beet juice to replicate the ‘bleed’ of beef.

Alternative protein producers, such as Beyond Meat, can appeal to a broad range of consumers, from strict vegetarians to meat-eaters, who are experimenting with a change. This means that their market is, potentially, colossal. Indeed, Beyond Meat says that it is positioned to compete directly in the $1.4 trillion global meat industry.

In a nutshell, the movement towards meat substitutes and vegetarian options is gathering steam – and it should not pass investors by.

Here in the UK, meat alternatives continue to crop up at grocery stores and restaurants. In the 2018 Waitrose Food and Drink Report, Waitrose partner and managing director Rob Collins discussed the revolution of the mindful consumer, with “a desire to look after ourselves and our environment”. This is evident not only in people choosing products with less packaging, but also in the trend for more people to adopt a vegetarian, a vegan or a ‘flexitarian’ diet. One in eight people in the UK, or nearly 13 per cent of the population, is now vegetarian or vegan, with an additional 21 per cent identifying as flexitarian, where meat eaters cut back on their consumption of meat in favour of vegetarian options. Altogether, this means that a third of the UK population has now adopted a meat-free or reduced-meat diet.

This is a relatively new, but rising, trend. Around 60 per cent of vegans and 40 per cent of vegetarians have made this lifestyle change at some point over the past five years. Reasons for giving up meat will vary by individual, with animal welfare, health and environmental concerns topping the list of motivations. The Vegan Society states that if the world went vegan, it could result in 8m avoided deaths by 2050, reduce greenhouse gas emissions by two-thirds, lead to healthcare-related savings and avoid climate change damages of $1.5 trillion. Regardless of the reasons for giving up or cutting back on meat, awareness of the idea is growing. Google searches about veganism quadrupled between 2012 and 2017, and now get more than three times more interest than vegetarian and gluten-free searches.

Liberum analyst Nico von Stackelberg believes that it is “virtually certain” that the growth of vegan and vegetarian products will continue, as consumers are continually seeking products that are both good for the planet and for themselves. “We have no doubt that vegetarian options will continue to be a dynamic area of the market,” he said. Fellow Liberum analyst Robert Waldschmidt observes that plant-based products are expanding beyond meat categories into beverages, yoghurts, ice creams and more. Consumer goods giant Nestlé is targeting meat-free sales of CHF2bn (£1.7bn) by 2022, while Danone expects its plant-based business to top £5bn in the coming years. Mr Waldschmidt believes that market supply of plant-based products is scaling up, and expects more listed companies to have a plant-based angle in the coming years.

Consumers themselves aren’t the only ones looking to diversify away from a meat-heavy offering. Some UK-listed meat producers themselves are adapting to these changing consumer tastes. Rather than abandoning the meat business altogether, they’re using their existing customer knowledge and distribution networks to keep up with a growing demand for vegan and vegetarian proteins.

Although it was traditionally solely a meat producer, Hilton Food Group (HFG) is branching out beyond its meaty roots. It recently bought a 50 per cent stake in Netherlands-based vegetarian and vegan product manufacturer Dalco, with an option to buy the remaining 50 per cent in 2024. The deal gave Hilton access to the fast-growing plant-based market, and advances its goal of diversifying across proteins, as it bought seafood business Seachill in the previous year. Chief executive Philip Heffer said that while there is demand for both vegetarian and vegan options, the latter is more complex in terms of product development because there are more restrictions on what ingredients can be used, such as no eggs and dairy.

Serving up something different

Both The Real Greek and Franco Manca, the restaurant chains operated by Fulham Shore (FUL), are catering to this demand. The Real Greek launched an entirely vegan menu in spring 2018, and Franco Manca now offers a vegan cheese option so that any of its meat-free pizzas can be made vegan. Wagamama and Frankie & Benny’s owner Restaurant Group’s (RTN) former chief executive Andy McCue had cited improving its brands’ vegetarian and vegan options as one of the key plans for the 2019 financial year. Progress is already under way – a spokesperson for Restaurant Group said that the group has significantly increased the number of vegan and vegetarian options across all the brands, including a collaboration between Wagamama and vegan chef Gaz Oakley.

The pub groups are also embracing this plant-based approach. Last year City Pub Group (CPC) opened its first venue with an entirely vegan menu, called Tell Your Friends, in Parsons Green, London. Chief executive Clive Watson said that this location acts as a test kitchen for vegan menu options, which then can be added to the menus across the group’s 45 locations. Since Tell Your Friends opened, the number of vegan or vegetarian dishes on the group’s menus has increased to around 40 per cent of the total. Mr Watson said that demand for these dishes is not coming solely from customers who identify as vegan or vegetarian, but also from those looking to embrace the flexitarian lifestyle.

Mitchell & Butlers (MAB) also has a fully vegan pub offering in central London, called The Green(er) Man. It serves the Beyond Meat vegan burger at All Bar One locations, and in the wake of the first ‘Veganuary’ campaign in January 2018, there was a 50 per cent increase in the number of vegan dishes sold in 2018 compared with 2017. Virtual brands including Veg Heads are now being piloted for delivery.

JD Wetherspoon (JDW) introduced a range of vegetarian and vegan options several years ago, and currently offers a separate standalone vegetarian and vegan menu in addition to featuring such options on the main menu. From September, this separate menu will be phased out in favour of putting these options on the main menu with clear markings. A spokesperson for Wetherspoons called the veggie options “extremely popular” and “a massive growth area”.

Hilton Food Group has done well to expand its protein offering beyond traditional meats, such as pork and poultry, into seafood and plant-based options. Any further expansion would be well-funded, as cash flow from operating activities improved 15.1 per cent to £53.5m during 2018. The company is also prepared for Brexit, as most of its products are sourced locally from their given region. At 933p, the shares trade on a multiple of 22 times forward earnings; a valuation reflective of a company that is delivering on its promise to diversifyits product offering forvarious demographics via sensible financing.

Fulham Shore has done well to expand its menu choices in order to meet the demands of vegans and vegetarians, but we are still sceptical of its openings strategy. Franco Manca location openings in London have cannibalised the sales of existing locations in recent years, which we do not believe would be sustainable were it to continue, given the competitive nature of the casual dining sector. Higher wage, rent and utilities bills have weighed on input costs and weak sterling has inflated food costs. While the shares trade at 11p, we maintain our sell recommendation.

The consensus across both the food producers and casual dining industry is clear. The growing preference for plant-based options is not merely a fad; it is here to stay. Naturally, the UK-listed meat producers are making strides to diversify the types of proteins that they offer via acquisition. This route makes sense, as shifting from producing meat to manufacturing plant-based proteins could be a difficult venture if done internally – given the restrictions on ingredients. Restaurants and pubs are also tapping into this growth by adding meat-free options to their menus, which could help to draw in a new batch of customers.