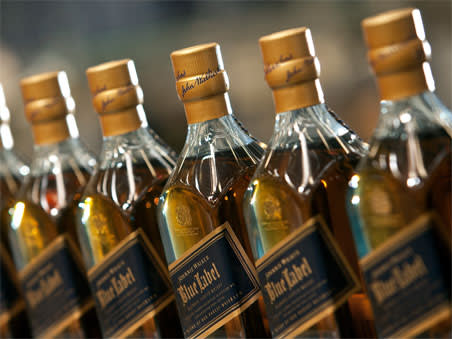 It is difficult to make blanket assumptions on prospects for the handful of companies that fall under the FTSE 350 beverage classification, if for no other reason than the differing scale of their operations.

The largest of the constituents, Diageo (DGE), sits between AB InBev (EBR: ABI) and Pernod Ricard (EPA: RI) in the global pecking order of alcohol companies, with marquee brands such as Johnnie Walker, Smirnoff and Guinness within its portfolio. So there is only a limited overlap with, say, AG Barr (BAG), whose main claim to fame rests on its status as the producer of Scotland’s alternative national beverage.

Irn-Bru probably doesn’t enjoy the same global recognition as the Diageo brands, at least outside expatriate Scottish communities. But it appears impervious to changes in wider consumer trends, apparent even as AG Barr reformulated its soft drinks in response to the introduction of a sugar levy on carbonated drinks. The soft drinks company markets around 20 other brands, but none enjoys the iconic status of AG Barr’s flagship bevvy.

As this issue went to the printers, AG Barr released a post-close update for its January year-end. Industry analysts will focus on marginal profitability, after a relatively poor performance at the half-year market was blamed on a short-term strategy designed to place “volume performance ahead of value”; ergo the pursuit of market share at the expense of unit profitability. The company also said that interim comparisons may not be as illustrative as previous periods due to the introduction of the levy, together with CO2 shortages and the “long, hot summer” of 2018.

The reformulations undertaken by AG Barr (and others) in response to the introduction of the levy are a feature of the industry from a risk management perspective, but even if soft drinks manufacturers are forced to respond to an increasingly health-conscious customer base, prospects for global sales remain encouraging. Recent market research from WiseGuyReports ascribes a value of $117bn (£90bn) to the global soft drinks market. And it is expected to grow at an average rate of 4.2 per cent annually through to 2026, by which time it could be worth $157bn.

Food and beverage companies need to adapt to changes in consumer preferences. AG Barr and fellow FTSE 350 constituent Britvic (BVIC) have witnessed increased demand for premium-brand soft drinks designed for adults who eschew alcohol, although they are also used as mixers for cocktails and short drinks. The experience of Aim-traded Fevertree Drinks (FEVR) shows that it is possible to straddle both worlds.

Nevertheless, about a fifth of the adult population in western markets don’t touch alcohol, a proportion that increases among younger consumers. It is instructive to note that Diageo has secured a majority stake in Seedlip, the world’s first distilled non-alcoholic spirits brand, and recently invested in US tipple Ritual Zero Proof, which is promoted as the first alcohol-free brand to serve up a realistic alternative to gin and whiskey.

Diageo’s financial clout enables the group to gain a foothold in any nascent corner of the drinks market, but it is not as though everybody is sobering up. Demand continues to build in emerging market economies, while consumers are trading up the value chain across a range of spirits, mirroring previous effects in the whiskey and gin markets, although this may be having a negative effect on beer volumes.

In terms of revenue, Diageo can boast ‘best in class’ across several of its spirit brands, with 18 of the top 100 global labels within its portfolio. The group’s size and production diversification affords a degree of predictability, so targeted mid-single-digit organic net sales growth through to 2022 doesn’t seem overly optimistic, although the FY2019 comparators will be difficult to match. Analysts expect steady margin progression through 2020 on the back of ongoing efficiency initiatives, but it would be unrealistic to expect too much from the share price given a forward rating of 25 times forecast earnings. You’re certainly paying for quality, but it is a viable buy-and-hold option with defensive qualities.

Ireland’s C&C (CCR) delivered double-digit revenue growth at its August half-year, even though the corresponding period in 2018 benefited from balmy summer weather and an unusually positive showing from England's football team in the World Cup. The group, producer of the Magners Cider brand, expects to deliver a double-digit rise in earnings for FY2020, following robust trading over a four-month period, helped along by the second-half weighting for the Matthew Clark/Bibendum business units, acquired from Conviviality when that business hit the skids. The shares were recently marked down following news that chief executive Stephen Glancey was stepping down from the post, and now look decent value compared with peers, although we are concerned that the decline in cider volumes noted at the half-year mark might reflect an ongoing trend.